Try Before You Buy: The Joy of Free Online Lit-Mags 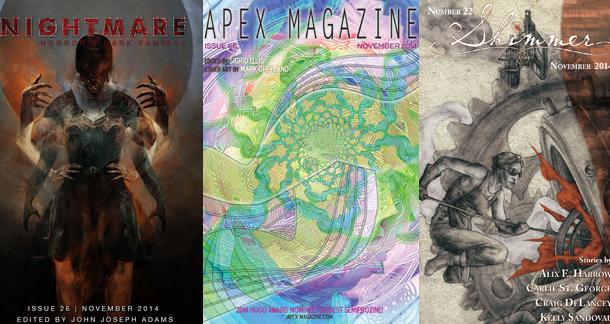 Back in May of this year, the lit-mag Shimmer—which publishes mainly dark fantasy—went all digital with its 19th issue. Prices for single issues and subscriptions dropped, and all stories published from then on would eventually become available to read for free on their website (following publication of the purchasable eBook). Shimmer publisher Beth Wodzinksi wrote positively about this transition from page to screen on the webzine's blog:

We've completely redesigned the site—and our publishing model...this means a steady supply of Shimmery stories for our readers, and a much wider readership for our authors. It's the next step in Shimmer's evolution, and we're thrilled to see where this new adventure will lead us.

A bold move for the publication, to be sure, but they weren't the first to go this route. The webzine, after all, has been around since the widespread advent of the internet, and this includes web-based fiction. Perhaps the most recognizable digital magazine is Clarkesworld (SF and Fantasy), who've been offering content for free since 2006. Less recognizable (but no less awesome, and in fact older than Clarkesworld by six years!) is Strange Horizons, which publishes not only sci-fi and fantasy, but also "horror, slipstream, and all other flavors of fantastika." We also have 3:AM (lit-fic with an edgy/experimental bent), Apex (speculative), and a trio of fiction sites managed by editor John Joseph Adams—Nightmare (horror), Lightspeed (sci-fi), and Fantasy (do I need to state the obvious here?)—as well as many others too numerous to name. With every publication mentioned, single issues and subscriptions are available for purchase, but ultimately stories are free to read.

You might be asking yourself: Why? Sure, as readers, it's great to have unlimited access to fiction, but how could free online content possibly benefit the publishers?

In short, the answer is: quite a bit, actually. Now, here's the long answer...

It's Good For Readers

Yes, we've established that free is good. But it goes much deeper than our culture's love of freebies. I spoke with the aforementioned John Joseph Adams, and I think he sums up this matter perfectly:

I find that the benefit to having our stories available for free online contributes greatly to the community conversation. Being freely available online makes it very easy for folks to share stories they enjoy and easy for their friends to go check out the same—and because it's free to all, it makes a dialogue more likely to happen.

In other words, content—at least from Adams's perspective—has more value when it's easily accessible by the most amount of people. And the only way to achieve this is by making said content free. How many times have you clicked a link to a New York Times article a friend of yours posted on Facebook, only to discover you have to be a paid subscriber to access the piece? Frustrating as hell, isn't it? News/viewpoints that could have sparked a widespread online conversation via the comments section has been capped off to a select few people. For me, information just shouldn't work that way.

Furthermore, free and easily accessible content fosters the individual reader's ability to discover—and fall in love with—new authors. If it weren't for Nightmare, I might have never learned about Caitlin R. Kiernan, Dale Bailey, or Martin Cahill, to name but a mere few (and Nightmare is, of course, only one source of discovery).

It's Good For Writers

Perhaps this goes without saying, but free stories online is just about the best thing for aspiring and even seasoned authors. As Wodzinski noted in her blog post, free means "a wider readership" for writers. This also goes back to the discovery aspect of my argument above.

Moreover, free online content serves the writer-as-reader. The ability to easily find other writers within (and without) your genre widens the pool of potential game changers for your voice and creativity. But having a wealth of content also increases your capacity to read widely, to expose yourself to diverse genres and viewpoints previously unseen. And because all this content is conveniently accessible via your computer, smartphone or tablet—literally at your fingertips—you have no reason not to be well-read. There's that much-referenced quote from Stephen King's On Writing:

This passage is particularly true in the digital age, when a good story is just a click or tap away.

But perhaps the biggest advantage free online content offers writers is the ability to read a magazine thoroughly before submitting your work there. As John Joseph Adams points out:

...the free online component of the magazine...serves as a great big 'free sample' for anyone wanting to try the magazine. So a prospective reader doesn't just get a handful of free stories to sample or choose from, but a tremendous wealth of material.

...each new story that comes out is a new chance for us to draw readers to Shimmer—so instead of two or three issues a year to publicize, we have a new story every other week.

How many magazines have you encountered that encourage you to read several issues before submitting your work to get a good idea of the type of stories they publish? You should absolutely take this advice less as an encouragement, more as a command from on-high, because it's a mutually beneficial practice—why waste your time, and the editor's time, sending a story to a publication that will likely not accept your work? The problem is, it can be tricky and/or costly to read multiple issues of a magazine, and we writers are notoriously poor. Online stories allow you to get a rich understanding of a magazine for no cost (unless of course you count the purchase of the computer/smartphone/tablet).

It's Good For Publishers

Now, here we are, back to the initial question: how does a free component benefit publishers/editors? Put another way, why would anyone willingly subscribe to a magazine if they can read it for free online?

Aside from the reasons already mentioned, let's first consider that subscriptions aren't the only source of revenue. You can buy single issues of all the magazines heretofore discussed, and because they're eBooks, they're significantly cheaper than their tactile counterparts (generally ranging from $0.99 to $3.99). Publishers are also able to sell ad space on their websites, as well as utilize services like Patreon, which allow individuals to donate money to an organization or project merely because they enjoy it.

Revenue aside, the online platform is much more manageable than print. Beth Wodzinski notes:

...it's made our workload much steadier and simpler. Instead of big complicated pushes to release an issue several times a year, we have smaller pushes at very regular intervals. Simplicity is delightful.

But again, maybe the biggest perk for publishers and editors goes back to discovery—or perhaps a better term is outreach. I'll once again turn to John Joseph Adams:

It's a valid question whether or not we'd have more paid subscribers if we made less of our content available online for free, but for now I'm inclined to go with the adage "if it ain't broke don't fix it"—and if the functional model is one that also happens to make it tremendously easy for new readers to sample and discover the magazine, then all the better.

Neil Clarke, publisher and editor of Clarkesworld, echoes Adams's sentiment. He acknowledges the financial instability of running an online lit-mag, but at the same time it seems he wouldn't trade his business for the world. When asked what he loved best about the job, Clarke told Iulian Ionescu of Fantasy Scroll Magazine (another free online publication):

All of it. A stranger walking up to you at a convention and thanking you. Someone emailing you about how a particular story has touched them...Simply knowing that there are tens of thousands of people reading what you publish each month...and they like it.

In other words, what Clarke, Adams and Wodzinksi are saying is this: free content allows them to reach more people and create a broader fan-base than paid content ever could.

Personally, I also believe non-payers eventually become payers, if they love and believe in the product enough. I'm proof of this. I read Nightmare and Apex online for maybe a year or so before I finally decided it would be way more convenient to just have each issue delivered to my iPad. Becoming a subscriber also meant I could support these two publications that had been providing me with consistently stellar content. Similarly, I had read a few issues of Shimmer prior to their digital relaunch, but now that I've sampled (and loved) a good chunk of their content, an eBook subscription is at the top of my Christmas list.

But therein lies the crux of this argument: people don't want to pay for things they can't sample first. In many cases we do—you can't exactly try out a haircut before you drop the hammer on it—but if there's a no-pay option before we purchase, we will undoubtedly take it. It's the "try before you buy" business model utilized by restaurants, car dealerships, music stores (both instruments and records), app developers, physical bookstores and, of course, drug dealers (not that I'd know). It's been a successful model for decades upon decades now, and like John Joseph Adams said, "if it ain't broke don't fix it."

What other free online lit-mags do you enjoy reading? Has the easily accessible nature of said content eventually led you to pay for single issues or subscriptions, or to donate to the publication in any way? Let us know in the comments section.