There's A God For That: Inserting Mythological Allusions In Your Writing 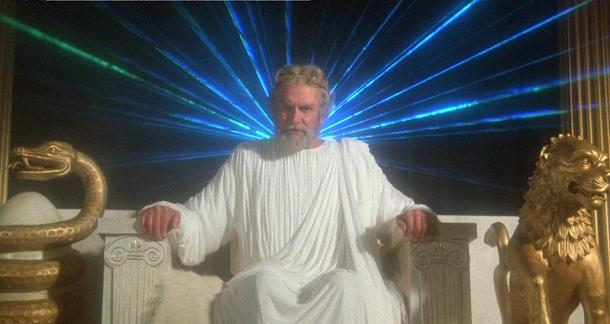 In a recent article from The Guardian, writer David Shariatmadari bemoans journalists overusing the same allusions to Greek mythology when commenting on the current economic crisis in Greece. Of course, allusion is nothing new to the world of writing. It's one of the basic tools we can use to beef up the "literary merit" of our stories, or as a means of paying homage to other wonderful works of art that inspire us. And perhaps one of the biggest sources for allusion (both in terms of prevalence and in breadth of material to choose from) is Greek mythology. References to Zeus, Icarus, Apollo and Aphrodite appear everywhere, not just in news articles. Two deity-loaded publications immediately come to mind: Neil Gaiman's American Gods, and Pantheon Magazine, which is ran in part by LitReactor folk.

But if like Shariatmadari, you're keen on expanding your knowledge of deities and legends, here are some resources to help you find more obscure mythological figures for your writing. But please, always remember to use your allusion responsibly and not wade into the gnarly waters of cultural appropriation.

Note: I don't claim to be an expert in mythological studies, so if there are some good resources for this course of study I've missed, be sure to let us know in the comments section.

Yes, I know, this is THE mythology book, the one you use in middle school as an introductory text to the Greek and Roman allegories. But if you leaf back through this text, it doesn't take long to find myths less prominent in our average, modern-day consciousness. For instance, in the section "The Lesser Gods of Olympus," Hamilton writes of Nemesis and Aidos, personified emotions "esteemed highest of all feelings in Homer and Hesiod." Hamilton's entry on this pair is brief, but further research on Theoi.com (more on this website in a moment) tells us that

Aidos, as a quality, was that feeling of reverence or shame which restrains men from wrong; Nemesis was righteous indignation aroused by the sight of the wicked living in undeserved good fortune.

I can imagine a plethora of narratives emerging from this relationship, either directly or indirectly referencing Aidos and Nemesis.

Theoi is a massive online encyclopedia dedicated to Greek mythology. If you're totally in the dark, or if you just need to brush up, this is an excellent site to visit. On the main page, there's a handy index of links divided into categories such as "Greek Myth Intro" and "Greek Myth Bios." Within these list headers are further subcategories, including Gods & Spirits A - Z, Greek Star Myths, and my personal favorite, Bestiary of Creatures. There, you'll find all manner of fantastic beasts, including this guy: 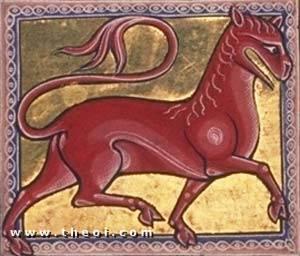 The Leukrokottas, described as having

the body of a stag, a lion's neck, cloven hooves, and a wide mouth with a sharp, bony ridge in place of teeth. It had the ability to imitate the voices of men to lure prey.

If you're looking for information about more than just Greek mythology, head over to GodChecker.com, a site claiming to have "more Gods than you can shake a stick at." On the main page, there's a "Deity of the Day" info box, so simply dropping by the website might reveal an unknown God to you.

But of course, their database goes much deeper than this. Clicking on "The Pantheons" link at the top of the main page gives you a drop down list loaded with links to gods of numerous cultures. 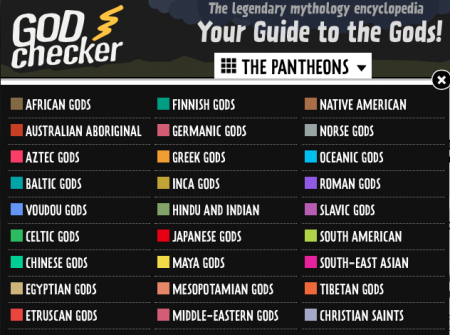 Clicking at random can get you quite far at God Checker. Doing so, I learned about Benandonner, a Celtic fighting god, also known as The Red Man.

He was a fearsome beast of a giant with flaming red hair and an extremely burly beard. As you might imagine, he was not known for his placid nature.

One legend concerns Benandonner and Irish giant Finn-Maccool, who accepted a challenge from the former to a brawl. The Red Man single-handedly built a bridge across the sea, from Scotland to Ireland, but upon arriving for the fight, he was greeted by a giant baby. Fearing this to be the son of Finn-Maccool—and if the baby was this big, imagine how mighty the father must be—Benandonner fled, destroying the bridge as he went. But it turns out the baby was only Finn-Maccool in disguise.

A great website for name etymology, Behind the Name also features a section dedicated to mythological monikers and their meanings. If you're looking for a name from antiquity with a particular quality for allusive purposes, this is a great place to start.

Perhaps an obvious site to include here, but Wikipedia does contain some useful lists of gods and goddesses from around the world, including Mesopotamian and Anglo-Saxon deities. There's also a comprehensive page detailing monsters and spirits from Choctaw mythology, including information on Bohpoli, a "little man" of the forest who enjoyed throwing rocks at the trees to make strange noises, a harmless mischief aimed at the people of the tribe.

These lists really only scratch the surface of course, so be sure to jump down that rabbit hole sometime.

According to the "About" section on the main page,

DeliriumsRealm is devoted to the study of good and evil in society; specifically, what is the nature of evil and how has evil been defined and personified throughout history.

This area of concern includes a lengthy section devoted to demonology, particularly of the Judeo-Christian variety. We all know about Lucifer, but what about some of the other demons of Christianity? There are lots to choose from. Personally, I'm enamored by Lix Tetrax, mostly for its badass name, but also because the demon seems to be more or less a gremlin. He describes himself thusly:

I create divisions among men, I make whirlwinds, I start fires, I set fields on fire, and I make households non-functional.

Once again, if there are any resources that deserve mentioning, or if you just want to shout out your favorite god, monster, or demon, make your voice heard in the comments section below.

Taking From the World Tree: Mythology and Cultural Appropriation

The Golden Bough: A Study of Magic and Religion which is an earlier overview of folk practices, taboos, mythology, creation stories... It was for a long time the go to resource for anthropologists and scholars of religion and mythology, being one of the first and most comprehensive works in comparative studies of these subjects. I found it very interesting and inspirational, but a few caveats: It is very old (circa 1890), and stuffy and academic during a time when they were inventing stuffy academics. It's fairly long, and not organized in a resource sort of way, something like 600 pages and the chapters follow their own sort of logic to get from subject to subject, but nothing easily accessible as a quick-reference guide as some of the other resources in the article. It does have the benefit, however, of being in the public domain and so completely free... I've linked to the Project Gutenberg page.

Joseph Campbell's work in mythology has also been influential through the years to many writers. I particularly liked The Hero with a Thousand Faces, which is the basis of The Hero's Journey (Vogler's interpretation of Campbell's work through Jung's archetype theories) which has been the standard guide for Hollywood filmmaking for the past few decades. When we talk about the Hero's Journey as a plot structure, this is where that comes from. It also is much more about storytelling and its mythological roots than a reference guide for less common mythologies to expand your allusory vocabulary.

Also the link in the article for Pantheon Magazine is broken.