The Seemingly Inevitable Relationship Between Writing And Imposter Syndrome 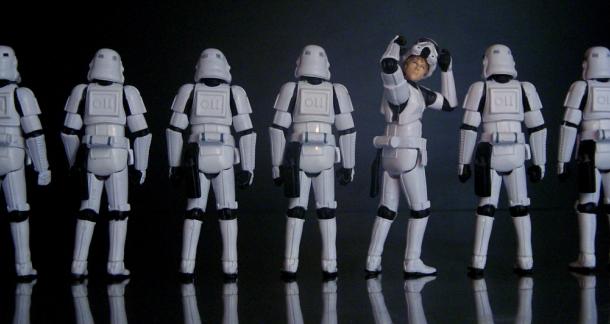 Every writer knows about imposter syndrome: those moments when you feel like a total fraud and a joke to your friends and family, a sad sack with unrealistic dreams, who isn’t doing anything a million other people aren’t doing, and, compared to other writers better than you, you’re failing at it miserably so what’s the goddamn point? Even when you're successful, when you get a few notches in the "win" column, you know that one day everyone around you will figure out that you're a giant fraud who has no business contributing to the literary world whatsoever. A faker, a poseur, a know-nothing piece of shit who needs to hang up their hat now before incurring anymore embarrassment.

We all feel this way sometimes, but the sentiment doesn’t have to eat us alive. And yet, it must be asked: why do we do this to ourselves at all, and why does it seem to happen more to writers than other creative types?

To answer the latter part of that question succinctly: imposter syndrome doesn't predominantly bedevil writers. Artists, filmmakers, actors, even "non-creative" types like company managers—you name the field, and there are plenty of people within it who feel like frauds. But as to why it happens at all? Megan Dalla-Camina notes in a Psychology Today article:

A tendency toward perfectionism, fear of failure, continually undermining one’s achievements (trekking up Mount Kilimanjaro? Oh it was nothing!) are all indicators that you might be prone. And it can be debilitating, causing stress, anxiety, low self confidence, shame and in some cases, even depression.

In short, imposter syndrome stems from deeper issues of self-esteem. This may seem obvious, but it isn't so to the person suffering from frequent bouts of fraudulent feelings, especially since, most likely, these feelings aren't limited to work related matters. If a writer feels this way about their writing, most likely they'll feel this way about themselves as friends, as parents, as partners or spouses, and so on. The roots of this intense self-deprecation aren't clear—according to Time Magazine writer Abigail Abrams, researchers either fall into the nature or nurture camps, though most likely, it's a combination of both (however, it should be noted, that imposter syndrome identifiers Pauline Rose Clance and Suzanne Imes initially recognized the condition in women, and given their "inferior" status within the workplace, the false idea that they only rose in the ranks due to their sex and not their merits, it's no wonder they and pretty much all other marginalized people would develop imposter syndrome in and of itself, i.e., not as a byproduct of any other psychological issues).

How To Deal With These Feelings

So how do you deal with imposter syndrome? One of the key first steps is acknowledging these thoughts of fraudulence for what they are, rather than ignoring them or, worse yet, validating them. Psychologist Audrey Ervin expands upon this notion in the aforementioned Time article by Abigail Abrams:

[By] Simply observing that thought as opposed to engaging it...We can help teach people to let go and more critically question those thoughts. I encourage clients to ask 'Does that thought help or hinder me?'

Abrams also spoke with author Valerie Young, whose book The Secret Thoughts of Successful Women examines imposter phenomenon from a female perspective. Her findings are universal, however, and her ultimate assessment on how to fight imposter syndrome can apply to pretty much anyone:

People who don’t feel like impostors are no more intelligent or competent or capable than the rest of us...It's very good news, because it means we just have to learn to think like non-impostors.

This realigning of our thoughts and behaviors includes learning to embrace, rather than shy away from constructive criticism, and—perhaps more importantly—internalizing the fact that we are not alone. Talk about these feelings with friends, family, and mentors. Unless they are absolute toxic people, they will reaffirm you and insist these thoughts are unfounded. This is especially the case with like-minded people who share in these imposter syndrome tendencies. Simply having a conversation with another writer (or insert any avocation you wish) and acknowledging each other's doubts and fears can be a tremendous relief. And even better, knowing that highly successful writers, et al. still struggle with imposter syndrome, and that they find a way to overcome it, can be a revelation (here's a LitReactor column from Michael David Wilson featuring big name authors like Stephen King and Margaret Atwood discussing their writerly fears, and how they move past them).

Last but not least, maybe the best way to escape imposter syndrome's debilitating effects is to view the condition as a "good thing." This notion is in line with the idea of embracing rather than ignoring fraudulence thoughts, but it goes a little bit deeper. As Caroline Castrillon points out in her Forbes article, imposter syndrome can be a positive attribute because it can: indicate a willingness to challenge yourself and stay out of dangerous comfort zones; keep your ego in check; and demonstrate how you're actually learning and growing and getting better at your craft. Obviously, if you're at a point where you're tearing yourself down and feeling you should give up, follow some of the steps outlined above to pull yourself out of the self-deprecation spiral, but when you're in an overall good place but still doubting yourself, try to remember what is good about the feelings you have, the ways in which the feelings you cannot control (and really, you can't) can be a positive for your career and your general well-being.

How many of you have suffered from imposter syndrome, both in your careers and your personal life? How do you deal with it? Do you use any of the methods outlined above, or are there other coping mechanisms you've found work. Share your thoughts with us in the comments section below, or via our social media accounts.