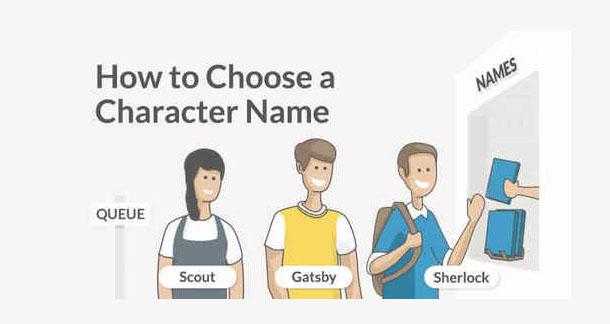 Choosing a name for your character is an exciting step in creating your bestseller. It’s also a big decision. Just like naming a real child, your literary offspring are going to live with their names for eternity, so they need to be a perfect fit. There’s a lot that goes into naming a character: culture, religion, geographical location, time period, genre — the list goes on.

I’ve narrowed it down to the top five factors you should consider when naming your character, with a bonus name generator that will help you pick the perfect moniker for the person you’ve worked so hard to create.

We all know that names vary widely around the world. It’s important to consider where your character comes from, where their family is from, and what cultural or religious beliefs they hold. If your character’s family are devout Irish Catholics, your character might have a classically-Irish name like Conor.

Pick a name that fits in your book’s setting

Like anything, names follow trends. You’ll want to know the setting and historical context of your story before you come up with a name for your character. In 1920s America, there were a lot of Dorothys and Bettys walking around. In 2000s England, you’d be more likely to meet a baby Emily or Michael.

You can also use a name that is noticeably different from the rest of the characters if you want to signal to your reader that your protagonist is an outsider to the main setting. Maybe your protagonist was born in the Middle East, but now lives in Latin America. How would their name stand out against other characters?

You can also use names to slip in some subtle foreshadowing. The most famous example of this...has to be Darth Vader. The word ‘vader’ translates to ‘father’ from Dutch.

Pick a character name in your genre

If you write fantasy or science fiction, you can play around with some really unique names. Chances are you’ve never met a Frodo or a Gandalf in person, but we feel instantly that these are the right names for the characters in Lord of the Rings.

If your story follows a particular mythos or legend, you’ll want your character names to fit in with the worldbuilding you’ve done. Maybe your story is based on Greek mythology, so your characters' names are Alexandra and Cassandra, or perhaps your futuristic sci fi requires some invented names, to reinforce the sense of otherworldliness.

With SFF writing, it’s much more important to make sure your characters’ names fit in with the rest of the setting, otherwise your readers may be taken out of the story. It wouldn’t make much sense for a Viking hero to be named Steve, would it?

Consider the meaning of the name

If your character has strong morals that guide them through their story, or stands for a certain cause, you may want to take it a step further and give them a name that reflects their beliefs. For example, the name Marc is derived from Mars, the Roman god of war. If your protagonist has to fight a battle (literally or metaphorically), Marc might be a great name for him!

You can also use names to slip in some subtle foreshadowing. The most famous example of this use of a character name has to be Darth Vader. The word ‘vader’ translates to ‘father’ from Dutch. Astute watchers of Star Wars might be able to pick up that Darth Vader is somebody’s father right from the beginning. (Do note that you should not, in fact, name any of your characters Darth Vader, as you’ll probably run into some copyright issues ahead.)

Try a few on for size

With the bountiful choices of names available to you, it can be paralyzing trying to find the right one. If you’ve found that you’re delaying your writing because you can’t pick a name for your protagonist, try one name you like and see how it goes. Sometimes it takes writing for a bit to get to know your character before you can name them — and only you will know if you deviate from the outline of your book, so there’s no shame in changing your mind.

You can always go back and change the name of your character as many times as you need to. You’ll be surprised how many authors had different names for now-iconic characters in mind. Some only found the right name just before their book was printed.

Use a character name generator

Still stuck on name ideas? Luckily, there’s a tool for that. Try out a character name generator to help you decide. We’ve created a generator at Reedsy that lets you sort through over a million names by language, genre, or character archetype. Plus, every suggestion comes with a definition for the name so you can choose the one that fits your character the best.

Good luck in your search for the perfect character name! Equipped with these guidelines, you can’t go far wrong — and, in my experience, when you’ve found the right one, you’ll know. Happy naming!

What's In A Name?

I have to say it really impressed me..thank you! retro bowl unblocked