'The Babadook': A Lesson In Subtext 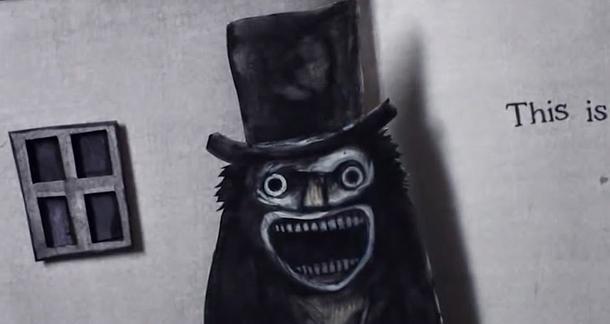 This month, Shout! Factory, that venerable source for outstanding Blu Ray releases of both classic and underrated and/or forgotten horror titles, will release a special edition of The Babadook, one of the most critically-celebrated films of 2014, and one praised by horror fans and casual viewers alike. On the same day as Shout! Factory's Blu Ray release (April 14th), the film will also be available to stream on Netflix, so there's no excuse not to see it if you haven't already.

But know this: if you're into more modern day/mainstream horror tropes, then The Babadook might disappoint. As Ben Kendrick of Screen Rant observes:

...casual film fans who need jump scares, carnage, and clear shots of a shadowy beast will likely find that The Babadook is too restrained and auteur to be a rousing crowd-pleaser...

In part, Kendrick refers to the elusive nature of the titular antagonist. Though we clearly see the Babadook rendered in a children's pop-up book, writer/director Jennifer Kent adopts Val Lewton's filmmaking principle and never really shows us her monster in his true form. Instead, the Babadook is a shadow on the wall, a hoarse, death-rattle voice on the telephone, a blob of slithering ink on the ceiling. This approach allows viewers to conjure from imagination their own interpretations of the Babadook.

Hearkening back to more atmospheric, psychological horror tactics pays off for Kent. As A.A. Dowd from the A.V. Club points out:

...not since Robert Englund first slipped on a striped sweater and brown fedora has a film conjured up a bogeyman of such primal, classical dread.

But while the illusory presence of Mister Babadook is certainly unnerving, he isn't as terrifying as the idea behind him, the subtextual horror fueling his very existence within the narrative. Let's dig deeper into Kent's slow-burning story and source out just what, exactly, makes The Babadook so scary.

'The Babadook' as Allegory

Behind the stylish mise en scène and beautiful photography, Kent's story is a relatively simple one. We follow Amelia (the brilliant Essie Davis) as she navigates the inhospitable terrain of single motherhood, a situation made all the more exhausting by her son Samuel's (Noah Wiseman) explosive and odd behavior. And if this were not enough, Amelia has yet to process the violent, shocking death of her musician husband Oskar, who died driving Amelia to the hospital to deliver Samuel. She keeps all of Oskar's possessions locked away in the basement and strictly forbids their child—a physical and constant reminder of her husband—from venturing down there.

As one might expect, our protagonist subconsciously blames Samuel for Oskar's death. But it isn't until a book called Mister Babadook mysteriously appears on her son's shelf that Amelia's true feelings, heretofore completely pent up, begin to surface. A.A. Dowd writes in his aforementioned review:

What really distinguishes The Babadook, however, is the metaphorical potency of its narrative. The subtext isn't subtle: Kent casts her eponymous villain as a manifestation of undigested grief and misplaced resentment—the ugly, repressed feelings the heroine takes out on her son...

While Dowd's assessment is apt, the subtext actually goes much deeper than this. Kent's monster also represents the Past with a capital P. It is because of this "undigested grief" that Amelia refuses to even acknowledge her husband's existence, let alone his sudden death. She keeps every aspect of his life—his violin, sheet music, suit and hat, for instance—hidden away both from Samuel and herself, because Amelia does not go down into the basement (i.e., the sealed-off section of her memory bank) either.

In this way, the Babadook not only represents Amelia's grief, but also her dead husband. There are numerous visual juxtapositions between the monster and Oskar, namely the aforementioned suit and hat nailed to the wall by Samuel in a mock-up of the Babadook's visage. Toward the end of the film, the supernatural baddie even takes Oskar's form to gently convince Amelia to kill her son.

Further evidence that the Babadook and Oskar are perhaps one and the same can be found in Kent's previous short film Monster, upon which The Babadook is based. Here, this notion is all but spelled out for the viewer when the shadowy figure escapes his basement prison. Tim Robey from The Telegraph explains:

You had to lip-read to get the subtext [in Monster]: when the young boy announces, 'Daddy's come back!', Kent killed the sound, as if his mother simply didn't want to hear.

While Monster ends on a question mark, Kent explores this extreme denial further in her feature film, and shows the consequences of locking the past away. Mister Babadook eventually possesses Amelia, turning her into the monster incarnate, with only two goals in mind: kill Samuel, then kill herself. This transformation—accomplished through the impressive acting chops of Essie Davis—horrifies both Samuel and the audience. As Tim Robey notes, "Her unraveling to an almost classical pitch of hysteria is easily the film's scariest special effect."

So scary and convincing, in fact, that the viewer, fully suspended in disbelief, fears Amelia may actually succeed and murder her son. This horrific prospect, however, shakes Amelia loose from the Babadook's grip, allowing her to finally confront her past and demand the monster leave her and her child be. Amazingly, the Babadook obeys her, and runs back down into the basement, back into its cage.The film's denouement shows Amelia and Samuel living openly with the monster, almost like a dangerous pet, feeding it and nurturing it with the same motherly love and attention Amelia now shows her son.

We get a happy ending after all, but we cannot forget the essential refrain that appears throughout the film: "You can't get rid of the Babadook." This at first appears to be a mere ominous statement foreshadowing a dark and troubling conclusion, where the monster succeeds. But with Kent's ending as it stands, the refrain remains true. Just like Mister Babadook, you cannot get rid of the past. If you attempt to do so, it will rise up anyway. Rather than burying the past and ignoring it, you have to embrace it, nurture it, and above all, acknowledge it.

With The Babadook, we have a welcome return to the horror genre's roots: exploring humanity's basic, universal fears. Every individual the world over has a skeleton or two (or three) hiding in their closet. What Kent demonstrates in her film is that these skeletons aren't lifeless piles of bones; they are living, breathing, seething entities, and if you don't deal with them, they will emerge and destroy you.

What do all you LitReactor folks think? Did you enjoy The Babadook? Were there any subtextual elements not covered here? Tell us what you think in the comments section below.

I just wanted to make a quick correction: Scream! Factory, an imprint of Shout!, is the venerable distributor of horror titles. Sorry for the error.

Joshua Chaplinsky from New York is reading a lot more during the quarantine April 10, 2015 - 2:30pm

Can't wait for the sequel, The Botchagaloop.

The Babadook II: Even Babadookier