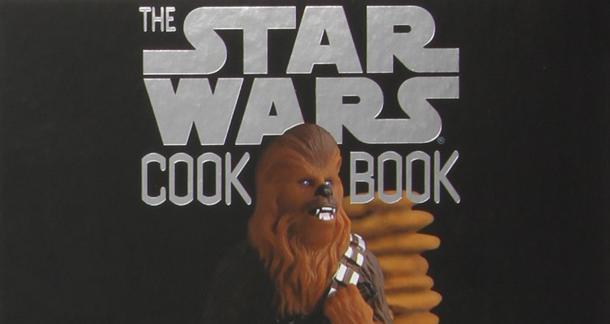 Movies and TV shows often have all manner of merchandise attached to their "brand," from toys, games and costumes to posters, novelizations, and tie-in novels (including graphic novel adaptations). But perhaps one of the more esoteric and sometimes strange merch categories is the tie-in cookbook, which appears far more often than you might think, and for properties you might not expect (Portlandia, anyone?).

To some degree, a cookbook associated with a movie or TV show makes sense, particularly if the property in question deals heavily with food and eating—like, for instance, the Hannibal tie-in cookbook that has yet to surface. But so many are incredibly left-field and flimsily tied to the particular brand, as you shall see below.

Submitted for your reading and culinary pleasures, here are ten TV/Movie-themed cookbooks that will either make you salivate or scratch your head. 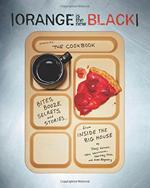 When you think about delicious cuisine, I'm sure prison food comes to mind. Thanks to the creators behind the Netflix hit Orange Is The New Black, we don't have to become pen pals with jailbirds to get our mitts on some of those mouthwatering meals. Containing over 65 recipes, including Red's Chicken Kiev (okay, the food this character makes on the show usually looks pretty damn good), Miss Claudette's Coconut Cake, and Prison Punch (not to be confused, I suppose, with Poussey's hooch), as well as side notes featuring other non-food-related tidbits and photographs from the show, this cookbook could either be an amateur chef's good friend or an item for rabid fans only. 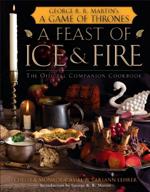 States this inevitable cookbook's blurb: "George R.R. Martin's bestselling saga A Song of Ice and Fire and the runaway hit HBO series Game of Thrones are renowned for bringing Westeros's sights and sounds to vivid life. But one important ingredient has always been missing: the mouthwatering dishes that form the backdrop of this extraordinary world. Now, fresh out of the series that redefined fantasy, comes the cookbook that may just redefine dinner...and lunch, and breakfast."

These are some bold claims. Still, the recipes featured in this book are well thought-out, with dishes matching the many lands within Westeros. So if you're interested in eating like the Night Watch eats, try out their Mutton in Onion-Ale Broth entree. Want to feast like that big king Robert Baratheon? Cook up some Almond Crusted Trout or Quails Drowned in Butter (no mention of poison pigeon pie, however). There are over 100 meals to choose from, as well as tips for "authentic" medieval methods paired with suggestions for modern-day ingredient substitutes. Many of the recipes actually look pretty good to me, my fandom for the show notwithstanding. 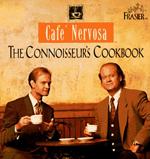 Yup. This one, which focuses primarily on desserts, breads, snacks and beverages—as well as quotes from the show—actually has an average five star rating on Amazon, with many users raving about the quality of the recipes. One reviewer even uploaded a photo of his favorite, Mocha Nervosa Walnut Bread. I'd eat that. While the book is currently out of print, you can pick up used copies on Amazon for about a penny plus shipping, so if you dig tasty baked goods and love Frasier, the price, it would seem, is quite right. 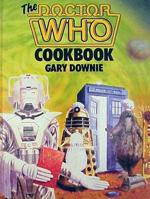 4. 'The Doctor Who Cookbook'  by Gary Downie

The only official Doctor Who cookbook ever published, and a bit of a collector's item these days, this tie-in features recipes from DW cast and crew members both past and present (well, up to 1985 anyway). You can cook up some Time Lady Tzaziki, Castrovalvan Kebabs, Mena's Tachyonic Sauce, or Patrick Troughton's Vegetable Soup with Dalek Krotons. While most of the dishes are only kookily named, there's also apparently a "mysterious unnamed dish from Venus," from Barry Letts, "which lists among its ingredients Blim Tree Worms and Grated Snadge..." (blurb info reprinted from the TARDIS Datacore Wiki). 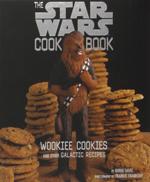 Sticking with the sci-fi theme, I'm sure you knew there was a Star Wars tie-in cookbook. I mean, even if you didn't know about this one specifically (or any of the numerous other Star Wars-themed cookbooks out there), you probably figured that old Georgie Lucas wouldn't have left one vein for profit untapped. In addition to the titular treats, this book also features Boba Fett-Uccine, Princess Leia Danish Dos, C-3P0 Pancakes, Jedi Juice Bars, and Crazy Cantina Chili. If you're hardcore about Star Wars, it's likely you already own this. If the recipes are nasty, at least it'll look good on the shelf with your other ephemeral Star Wars items. I do like that toy Chewbacca standing next to piles and piles of cookies. 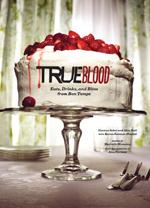 Half photo book from the series (150-plus images from Farnum fill the pages), half cookbook featuring "85 authentic bayou country recipes," this tie-in item is a must-have for the True Blood obsessive, but also an apparently well-crafted and truly authentic collection of recipes. Particularly when you consider that the meals are based on/inspired by the fictional restaurant featured in the show, Fangtasia and Merlotte's Bar and Grill, which "plays a key role in the series, providing sustenance for its human characters, evoking memories of a bygone life for its vampires, and serving as a powerful symbol for the desires and carnal needs the characters harbor." 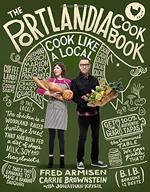 This goofy TV show's cookbook tie-in is apparently very serious about its recipes, featuring five categories of dishes culled from actual Portland-based chefs and restaurants. Still, there are only 50 recipes, but a lot of sidebars and commentary by characters from the show. At 176 pages, one hopes the book doesn't follow the show's same formula and offer three good dishes followed by a slightly varied repetition of the same dish over and over again. 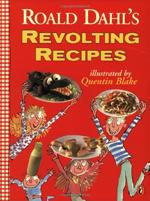 Not a direct tie-in to any specific Dahl work, this cookbook by the author's widow Felicity instead culls recipes from the entirety of Dahl's books. Quoth the blurb: "Who but Roald Dahl could think up such mouthwatering and deliciously disgusting foods as Lickable Wallpaper, Stink Bugs Eggs, and Eatable Pillows? Now there's a practical guide to making these and other delicacies featured in Charlie and the Chocolate Factory, James and the Giant Peach, and Dahl's other books, with easy, step-by-step recipes that range from the delectable to the truly revolting." This one sounds like a lot of fun. 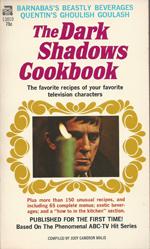 The recent Tim Burton movie adaptation may not have given much indication of this, but Dark Shadows used to be the shit. It was kooky and weird and spawned all kinds of merch spanning from the 60s all the way up to present day (an overview of which you can peruse over at Dark Shadows Online). It comes as no surprise, then, that the series also got the cookbook treatment, and, like the Doctor Who tie-in that followed, is a hard-to-come-by collectible for fans. Information about the actual content of the book is scarce online, but the cover boasts "Barnabas's Beastly Beverages" and "Quentin's Ghoulish Goulash," "Plus more than 150 unusual recipes, and including 65 complete menus; exotic beverages; and a 'how to in the kitchen' section." 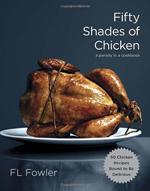 Not surprisingly, there are numerous Fifty Shades cookbooks out there; surprisingly, none of them are officially licensed by E.L. James, who, like George Lucas, slaps the Fifty Shades brand on just about anything. I chose this one mainly for the book trailer, which you can watch below (it features narration by a guy who sounds like a cross between William S. Burroughs and John Cale). The results of these recipes aren't anything special, but the names and presentation will surely entertain: Dripping Thighs, Sticky Chicken Fingers, Chicken with a Lardon, Spatchcock Chicken, Learning-to-Truss-Your Chicken, Mustard-Spanked Chicken, and so on. Enjoy the ridiculousness, people. You're welcome.

This list only scratches the surface of tie-in cookbooks out there. What are some of your favorites, dear LitReactor readers? Do you think you'll try your hand at any of these recipes? Tell us what you think in the comments section below.

There is also "The Wise Guy Cookbook: My Favorite Recipies From My Life as a Goodfella to Cooking on the Run" by Henry Hill, c. 2002.