Column by Christopher Shultz November 28, 2016
In: 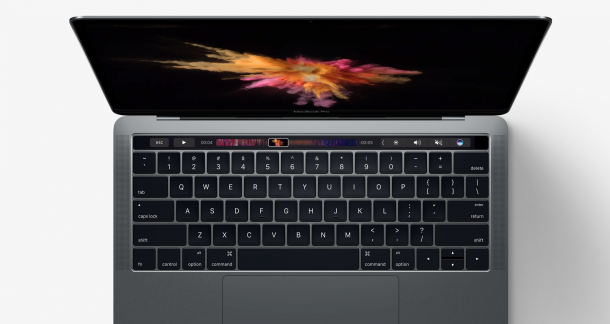 Welcome, fellow writers, to LitReactor's monthly tech and product round-up. We've got plenty of ground to cover—including some sweet discounts on Kindle devices (before a potential price hike on all electronics), an update on on the new MacBook Pros that rolled out earlier this month, and a look at some free online writing tools that might just improve your prose. Let's dive right in, shall we?

Get Kindle Devices on the Cheap

Today is Cyber Monday, y'all. Which, unlike its physical counterpart Black Friday, means you can actually get some decent deals online (and you don't have to worry about some psycho brutalizing you over a mousepad or whatever). Case in point: Amazon has price-dropped all their Kindle devices anywhere from $20 to $55, depending on which model you're interested in (for yourself or for others). So for instance, you could pick up a standard eReader model—normally $79.99—for $49.99.

But will these discounts end today? It's hard to tell. Amazon has been engaged in "Black Friday Week" deals since November 18th, and while discounts on non-Amazon products have popped up and disappeared throughout this period, the Kindle deals have remained intact. So you might not have to stay up to/wake up at the ass-crack of dawn to get Dad that Paperwhite for Christmas.

I touched upon the arrival of a new MacBook Pro from Apple last month, and mentioned the potential "Magic Bar" as a replacement for the longstanding function keys. Well, the rumors were true, all except the name: It's called the Touch Bar, so it sounds a bit less like some pot-laced rectangular sweet, and more like a hyphephiliac's favorite haunt. The functionality seems pretty cool overall. Here's a bit of the Touch Bar's basics from Apple's website:

It changes automatically based on what you're doing to show you relevant tools you already know how to use—system controls like volume and brightness, interactive ways to adjust or browse through content, intelligent typing features like emoji and predictive text, and more. And for the first time, Touch ID is available on a Mac, enabling instant access to logins and fast, secure online purchases with Apple Pay.

And here's an image from the same page telling you a little bit more about what Touch Bar can do (click to enlarge): 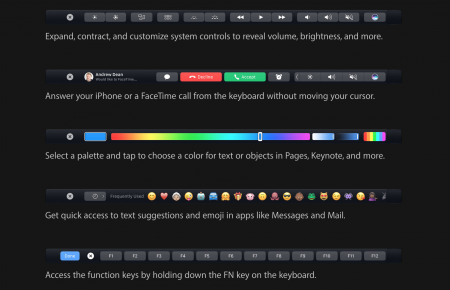 And lastly, for any other minute details you might be wondering about, head over to Apple's Support page for an overview of everything Touch Bar.

I will note that, despite my musings last month, it doesn't seem you can use this new feature as a means of launching software with a single touch, similar to the Dock's function but with a bit less scrolling and clicking. Customization really only occurs within apps—so for instance, you can quickly format text into bold, italics, underline, etc, similar to the way you can do so on an iPad or iPhone. It's a minor function I hoped to see, so I won't say the Touch Bar is lame on account of its absence. But is it lame overall? I wouldn't go that far, either, but at the same time, my mind isn't exactly blown by its presence either. Perhaps I'll feel differently once I finally get my hands on it.

I promise, this isn't a political thing, just something to note if you're a writer and a techie. See, there was that election thing earlier this month, and the guy that won the election thing has promised to raise tariffs on goods imported from China—as high as 45%, though Business Insider - Australia writer Kif Leswing doesn't think it likely. Other experts agree the new tariffs might only be about 15%, which isn't nearly as staggering, of course, but it's still enough to potentially raise the price of an iPhone, for instance, anywhere from $50 to $97. Again, with monthly payment plans from Apple and the major characters, you probably won't notice the price hike on the iPhone anyway. But we're not talking just about iPhones, we're talking about anything electronic that's manufactured, in part or in full, in China—which is pretty much everything. So the aforementioned new MacBooks, iPads, Samsung phones and tablets (assuming they don't blow up on you), and all manner of eReaders could put more of a dent in your pocket than you were expecting.

But will it actually happen? We'll just have to wait and see.

Did you do that Nanowrimo thing this month? If you're winding down with the novel-writing and you're ready to begin the editing process, check out this handy website, Passive Voice Finder. Paste a chunk of text into the box on the left, click the "Re-Analyze" button, and boom, the robotic grammarian will highlight instances of passive voice in your prose.

I tested the tool with the above paragraph—no passive voice there! 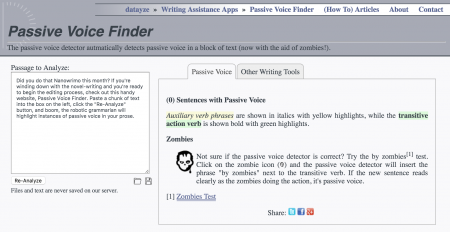 The "by zombies" function didn't seem to work, even with the default sample text still intact, but that's okay. I'm sick of zombies anyway. (For more on the "zombies" method of detecting passive voice, click here.)

This website, Datayze, offers a slew of other writing tools, such as a Readability Analyzer—great for you children and young adult writers needing to know if the pre-teens, tweens, and teens can adequately comprehend your prose—and a Difficult & Extraneous Word Finder, which, among other tasks, can point out any unnecessary adverbs you might want to cut.

Of course, another pair of eyes—i.e., an editor—is the best way of rooting out overt grammatical problems, but if you can't hire a freelancer and have to do most of the editorial legwork yourself, these are terrific (and free) online aids.

That's all for this month. If you have any writerly/readerly products or tech tips you'd like to see covered here, send an email to tech@litreactor.com and I'll take a look.