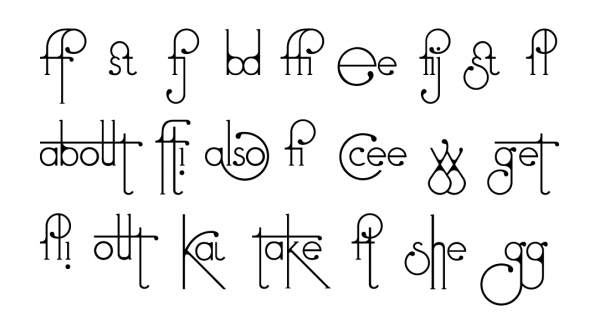 If you're a writer, you may or may not be moved by "font porn," but if you are, hold on to your butts. Futuracha Pro "adjusts and readjusts automatically as you write, based on the preceding and following letter," according to the below video. The font saw recent and resounding success as an Indiegogo crowdfunding project, originally created as a kind of experiment that allowed "graphic designers to use it by configuring and positioning every letter." There is an Open Type Font version on the way, which you can preorder now from the font's creator, høly, that will allow you to type with unpredictable flare. Watch the video and commence drooling...you know, if you're into that sort of thing.

So, you might be wondering why we're discussing sound effects on a site about writing. Well, picture this scenario: you're working on a story involving a character who walks up a gravel path, for instance. You initially write that the character "crunches" up the path, but during revisions you realize that's a pretty tired way of describing this sound, and you want to amplify the sensory elements in your prose. Problem is, you're having a bit of trouble really hearing this sound in your head. At this point, you could leave your office or writing space and find a gravel path, walk along the gravel path, swishing and grinding your feet into the ground and committing the sound to memory whilst also writing descriptions of the sound in your head or on your phone, notepad, journal, etc. OR, you could just head over to YouTube and search for sound effects of footsteps on gravel. You'll find plenty to choose from—I know from experience, in fact, because I actually lived through the above scenario. I found this video super helpful:

Sound Berries, the producer of this sound effect—intended for use in post production film and audio work—offers a whole slew of recordings to sample on their YouTube page. So the next time you can't quite conjure the memory of a sound—or even if you're writing about a sound you've never heard before—you have quite the arsenal of audio effects at your disposal, all for free.

Astrohaus, the makers of the Freewrite "smart typewriter," now offer a web-based writing platform called Sprinter. It's a distraction-free writing environment with a few customization options and an overall retro look. The key feature here is the status bar and timer you see on the right side of the below photo. 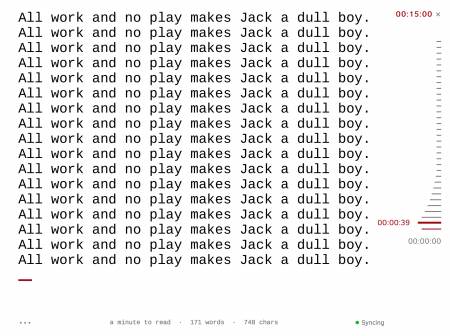 This of course allows you to set time-based (and also word-based) writing goals for each session. And yes, you can time yourself in any number of ways—if you cook at all, you probably own an egg timer, and if you own a smartphone, there's almost always a timer app built in to the device or any number of third party apps you can download to suit your needs. But I must say, there is something about having the timer right next to the text field. It really acts as a motivator, seeing the time slowly tick away as you write. To put it eloquently, it really lights a fire under your ass and gets those fingers moving, with the constant reminder that you only have THIS MUCH TIME left. I didn't realize how often I stare off into space and let my mind wander when I'm writing, until the specter of time held itself firm in my line of vision. So this could be an essential tool for anyone who struggles to get the words onto the page.

But it's also great for those break-time writing sessions, when you only have a few spare minutes before you have to get back to work. This is especially so because Sprinter also works on smartphones and tablets, since it's a web-based platform (the downside of course being that if you have no internet connection, you can't really use it). Moreover, you can set up a Postbox account and sync any documents you work on for later reviewing or continued drafting. You can also link up your Dropbox, and Postbox will send any documents there as a DOCX file. Pretty nifty.

However, you might be asking, what's the benefit of using Sprinter and the Postbox syncing/saving system as opposed to, say, both the desktop and mobile versions of Scrivener, which also lets you set session writing goals. Two things: one, Sprinter is, for now at least, free to use; and two, as the software is web-based, you can access you work and continue working on literally any device, even public computers at the library. This is also a boon for anyone who's ever had to have their computer in the shop, and thus cannot access the writing software of their choice.

That's it for this month. Until next time...