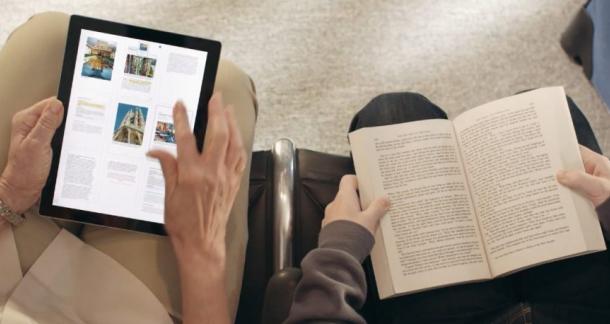 Hello all. I've got a decent handful of news and tips to share with you this month. Amazon released a pretty cool but not really cool new feature for their Kindle tablets and app. Though Apple is on the verge of announcing a new phone (probably, anyway, because they always do around this time of year), we haven't heard terribly much from their camp, though a few tidbits about iOS 10 are of particular note to writers. Last but not least, I've got a handy setting for you fellow Scrivener nerds, as well as some BIG news from the folks over at Literature and Latte.

Let us waste no more time and jump right into the business at hand...

There's a new feature from the Amazon Kindle camp: Page Flip. If it's name sounds a bit mundane, well, it is. But the feature is actually pretty neat—just don't expect your minds to be blown by this one; like I said, it's neat, not revolutionary.

So what does it do? Well, straight from the horse's mouth, here's what it does:

Page Flip is a reimagined Kindle navigation experience that makes it easy to explore books while always saving your place.

Hmm, that doesn't explain what it does at all. Makes it sound mind-blowing, but as I said, it isn't that. Which is okay, genuinely. Let's probe a little deeper into this, shall we?

Alright, basically Page Flip is a more advanced way of saving your place while you're reading a book. Look at it as the digital equivalent of keeping your finger in the book while you flip through pages, an action you might execute if you're running out of time on your lunch break and want to see how far you have until the next chapter or section break, or if you should rest at the good stopping place you just found (or say fuck it, keep reading and show back up to work late, whatever style you prefer). The feature also comes in handy if you're, say, reading a textbook on your Kindle and need to quickly reference a chart from another page, as this GIF from Amazon's page demonstrates.

See how your current page is "pinned" in the left-hand corner of the screen? That's your finger.

You can also switch to a "bird's eye view" and scroll through multiple pages at a time. This view will no doubt remind you of exploring a PDF in your Kindle, Acrobat, or Apple's Preview software. And that is pretty cool, yeah? Maybe it is mind-blowing after all. You be the judge on that one.

Finally, check out this rather odd video Amazon made to promote Page Flip. Note the age subversion, in which the young punk reads a physical book, and the granny reads on a Kindle, set against some kind of old west showdown scenario with Flamenco music on the soundtrack:

At least the video doesn't end with the punk tossing his paperback in the trash and buying a Kindle from an airport vending machine or something of that ilk.

One last thing on Page Flip: not all books support it at the moment, though that will likely change as the months go on.

There's been no official release date for iOS 10, Apple's mobile operating system for iPhone, iPad, iPod, etc. Speculation seems to suggest iPhone 7 will be announced sometime around September 7th, so if that's true, we'll likely see the new software then. Public betas were released in July, and as such, we've already seen most of what the new software has to offer. I covered pretty much everything of note to writers just after the WWDC keynote back in June, but two new things have surfaced (well, one new thing, and another thing I didn't notice until MacRumors pointed it out to me).

First, that very new-to-me thing: there might possibly, maybe be a mobile version of TextEdit that will come pre-installed on iOS 10. Which is cool, or at least it isn't uncool. But you probably shouldn't hold your breath on that. See, a TextEdit icon was spotted during the aforementioned WWDC event, but apparently that was just some kind of placeholder that has cropped up before (users had apparently noticed the same icon just before Apple released iOS 8, and there was no TextEdit then). So, you know, maybe it will happen, maybe not. Either way.

Second, Apple has changed the native keyboard click sound. Before, whenever you tapped the little letter keys on your screen, the software emitted a noise not unlike a typewriter or mechanical keyboard. Now, it sort of sounds like on of those kid's push toys, the thing that looks like a vacuum cleaner, but has colorful balls inside a dome that pop and bounce about.

The new sound sounds like one of those things (the toy is called a Corn Popper, apparently). Here's a YouTube demonstration of the noises you have to look forward to:

I personally always have my phone on silent, and I rarely use the onscreen keyboard on my iPad for serious typing, so this issue doesn't really affect me (and if you're like me, then it won't affect you). Still, it was nice having a bit of typewriter nostalgia built into this digital landscape.

I recently discovered this setting in Scrivener (my writing software of choice), and thought I'd pass along the info to anyone not in the know. But simply writing about it and providing screenshots doesn't really do the benefits of the setting justice. It really requires video to best demonstrate its capabilities. So I made one of those dry software tutorial videos. Enjoy!

One Last Thing About Scrivener...

Maybe you've heard, and maybe you haven't, but the iOS app for Scrivener is now available! In case you can't tell, I'm a huge Scrivener nerd, and those of us in the Scrivener nerd community have been waiting for a mobile iteration of the software for some time now.

I'll have a lot more to say about the app, which is available on both iPad and iPhone, a little later, but the news of its existence alone was worth mentioning here.

That about wraps it up. Share any tips, tricks, or tech news of use to us writers in the comments section below. Otherwise, I'll see you next time.

Finally Amazon launch interested new feature Kindle Page Flip, i think now this feature will resolve the reader issue show have eye side problem. I use this device for couple of years and i personally recommened to ever one who love to read books then they must try amazon kindle devices. You can also buy this device online. Last time i was buy this deveice from amazon official website but please make sure that your internet speed is good because the ecommerce website take some time to load there package due to high volume of traffic and high graphics so thats why i must say that you can try xfinity bundle deals packages because they offer best internet service i use this service for last 3 years.