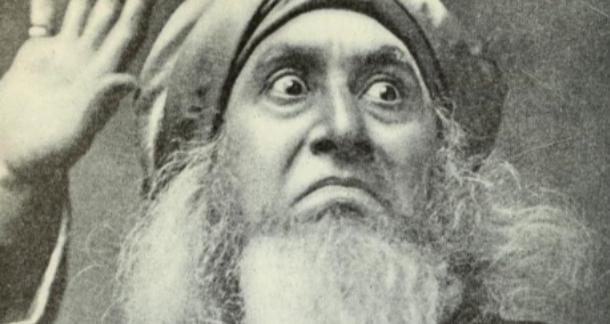 This month, Shakespeare turns 456 years old (the exact date of his birth is unknown). Anytime I hear the Bard's name, I almost always think of this English professor I had in college whose speciality was Shakespeare, and who taught a class devoted exclusively to the study of his plays.

Sounds awesome, right? Not really. This professor was a conservative blowhard who insisted that had Shakespeare been alive in the modern day (this would have been circa 2001 or 2002), he would have definitely supported George W. Bush, because clearly the president at that time was on the "moral right" and had everything figured out.

Those who claim to possess the absolute "moral right" are often and utterly full of shit.

Chew on that for a moment, and then we'll continue.

This professor really loved The Merchant Of Venice, and he insisted the play's depiction of a bloodthirsty Jewish man named Shylock wasn't anti-Semitic because Shakespeare had his skewers set on the "universal moral truth" (oh this guy loved to use that phrase) that murder is bad, m'kay? For this professor, the Bard's work—not just Merchant, but all his writings—were simple morality plays communicating, with no uncertainty, right from wrong.

Yes, one of the most celebrated and studied authors ever, whose plays are considered masterworks of literature for their complex and genius studies of humanity, was nothing more than a moralist telling his audience that murder is bad m'kay, but—and this is true, this professor actually believed this—not necessarily racism is bad m'kay or anti-Semitism is bad m'kay.

That's a bit hard to swallow, given Shylock's famous monologue from around the middle of the play. Upon reading the text, I was struck by the character's imploring and rousing words, which, for me, constituted the entire crux of the work:

To bait fish withal: if it will feed nothing else,
it will feed my revenge. He hath disgraced me, and
hindered me half a million; laughed at my losses,
mocked at my gains, scorned my nation, thwarted my
bargains, cooled my friends, heated mine
enemies; and what's his reason? I am a Jew. Hath
not a Jew eyes? hath not a Jew hands, organs,
dimensions, senses, affections, passions? fed with
the same food, hurt with the same weapons, subject
to the same diseases, healed by the same means,
warmed and cooled by the same winter and summer, as
a Christian is? If you prick us, do we not bleed?
if you tickle us, do we not laugh? if you poison
us, do we not die? and if you wrong us, shall we not
revenge? If we are like you in the rest, we will
resemble you in that. If a Jew wrong a Christian,
what is his humility? Revenge. If a Christian
wrong a Jew, what should his sufferance be by
Christian example? Why, revenge. The villany you
teach me, I will execute, and it shall go hard but I
will better the instruction.

One imagines an actor delivering these words with a passion close to ire but also bathed in pathos (I have since seen an actor do just this). I became convinced Shakespeare wasn't merely saying murder is bad m'kay, but that his skewers were in fact set on Christian hypocrisy, that he was lambasting the sometimes twisted morals of those who so furiously insist their sole possession of the "moral right." Especially when you consider just how idiotic, aggravating, and hateful the Christian characters of Merchant truly are. As noted by Smithsonian writer Brandon Ambrosino and University of Maryland professor / Folger Theatre Dramaturg Michelle Osherow:

Consider general Christian virtues, says Osherow, like showing mercy, or being generous, or loving one’s enemies. 'The Christian characters do and do not uphold these principles in varying degrees,' she said. Antonio spits on Shylock, calls him a dog, and says he’d do it again if given the chance. Gratiano, Bassanio’s friend, isn’t content with Shylock losing his wealth, and wants him hanged in the end of the courtroom scene. Portia cannot tolerate the thought of marrying someone with a dark complexion.

'So "loving one’s enemies?"' asks Osherow. 'Not so much.' The play’s Christian characters, even the ones often looked at as the story’s heroes, aren’t 'walking the walk,' she says. 'And that’s not subtle.'

Ambrosino and Osherow go on to discuss Portia's equally famous speech near the end of the play, during the climactic court scene, which advocates for showing Antonio mercy and sparing him paying Shylock's price of a pound of flesh (terms Antonio, perhaps the play's biggest anti-Semite, greedily accepted). Yet her plea of mercy doesn't extend to Shylock who, as a Jew, is an "alien" and thus, in effect, deserving of nothing. "Justice," then, is served when the court strips Shylock of all his wealth and forces him to convert to Christianity (or else die). This hypocrisy—mercy only for some, not for everyone—might not even be lost on Portia herself, as she admits in her first appearance in the play, "I can easier teach twenty what were good to be done than to be one of the twenty to follow mine own teaching." (Translation: "I don't practice what I preach, and I'm okay with that.")

Shakespeare did try to humanize Shylock and point out the hypocrisy of Christians at a time when doing so was deeply controversial.

That idiot professor I had in college thought Shylock got everything he deserved for the sheer fact the character engaged in bloodlust, never once acknowledging that the Christian characters were just as bloodthirsty. Had Shylock not acquiesced to his forced conversion, I have no doubt they would have executed him in short order, as was the real-life case of Rodrigo López, a Jewish immigrant from Portugal charged with conspiring to poison Queen Elizabeth I, who "was executed with the usual barbarities" a handful of months after his conviction, according to Guardian writer Charles Nicholl.

It is generally theorized that the trial and execution of López inspired Christopher Marlowe's searingly anti-religious The Jew Of Malta and, latterly, Shakespeare's Merchant. We have no way of knowing for sure, but if that is the case, can we assume both plays are meant to satirize what the men considered to be a travesty of justice? Put more simply—and to finally address the question posed by the title of this piece—was Shakespeare an anti-Semite or not?

Much like whether López inspired the Bard, unfortunately we'll never really know. Shylock is Shakespeare's only proper Jewish character, and even though Merchant may be working to humanize the man in order to satirize Christian hypocrisy, he's still a problematic character that displays some of the grossest Jewish stereotypes. It's worth noting, however, that Jews were formally expelled from England in 1209, and thus Shakespeare's experiences with Jewish people may have been next to nil. In this way, Shylock might be a product of ignorance in the truest since of the word: Shakespeare had only to go on what he'd previously heard about Jews. But again, this is pure speculation.

Elsewhere in his work, Shakespeare makes derogatory references to Jews, mainly about how they are "untrustworthy" and "swear falsely," though as Lois Leveen points out, these remarks (made by characters, not necessarily the playwright himself) "may tell us less about the author’s and the audi­ence’s per­cep­tions of Jew­ish­ness than about their per­cep­tions of Eng­lish­ness," specifically their anxieties over an ever-changing social, political, and religious landscape. Moreover, much like Shylock, these references may also work to satirize dominant religious viewpoints, but the best we can do is shrug when attempting to pinpoint the Bard's motivations.

So where does this leave us concerning reading and mounting productions of the play today? The best answer to this question, at least in the context of reading the work, may come from Ambrosino and his aforementioned Smithsonian piece. He quotes Susannah Heschel, professor of Jewish studies at Dartmouth College, as saying, "'I think it is absolute idiocy for people to say [of Merchant], "It’s Anti-Jewish" and therefore they don’t want to study it...It’s a treason to Western Civilization. You might as well go live on the moon.'" Ambrosino goes on to write,

Despite its negativity towards Judaism, Heschel thinks Merchant is one of the most important pieces of literature from Western Civilization. 'What’s important about [it] is to read the play—as I do—in a more complex way, to see whether we are able to read against the grain. That’s important for all of us.'

As for performing the play, I think it's best to remember that, even though his depiction of a Jewish man might be flawed (especially when reading it through 21st century eyes), Shakespeare did try to humanize Shylock and point out the hypocrisy of Christians at a time when doing so was deeply controversial. After all, anti-Semitism and Nazism have enjoyed a terrifying resurgence these last few years, and given that the original Nazis loved to produce The Merchant Of Venice—with Shylock often appearing as a literal monster—perhaps what we need now more than ever are works that point out, in no uncertain terms, that those who claim to possess the absolute "moral right" are often and utterly full of shit.

Purchase The Merchant of Venice from Bookshop

off of all shelves and all his plays banned