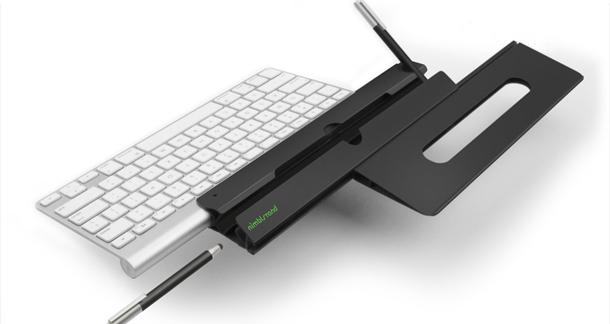 I've written extensively on the wonders of using your tablet in combination with a Bluetooth keyboard for an optimal away-from-home (and at-home) writing experience. But what about accessories that marry the two devices together, bringing the tablet just a little closer to the realm of the laptop? For a long while, I used Incase's Origami Workstation, a foldable case designed for the Apple Wireless Keyboard that folds into a prop stand for the iPad. The Workstation worked pretty well, but it was really only effective when placed on desktops, as the iPad was still too top-heavy to sit in my lap.

Then, I got turned on to the nimblstand, which works great on a desk as well as a lap, and all my problems were solved. Furthermore, problems I didn't know I had were solved by this simple piece of plastic.

I'll get into those problems and how the nimblstand fixed them in a bit. First, a little about the product and the company itself. Based in Hawaii, the makers of this nifty stand pride themselves on being an American-owned organization, with all manufacturing taking place in the States as well. Here's more from their press release:

nimblstand was created by Gustavo Fontana , a world-class industrial designer with experience designing over 200 products for 50+ companies, including many award-winning and iconic objects. Partnering with design researcher Matt Esecson they developed this ‘Made in U.S.A’ product that is the result of 2 1/2 years of work, over 300 virtual 3D models and 64 physical prototype iterations. Frustrated by the compromises with the iPad on-screen keyboard and the undersized keys of iPad keyboard-cases, he decided to incorporate his favorite keyboard, best stylus (with a storage slot so it’s always ready, never lost) and a browsing-mode stand.

The "favorite keyboard" and "best stylus" here are the Apple Wireless and Wacom Bamboo, respectively. Now, if you're a diehard fan of a different stylus, not to worry: other brands fit okay in the slot, if you choose to use it, or else just keep your stylus in a bag.

As far as using other Bluetooth keyboards, you are out of luck there. The nimblstand, as previously stated, is single piece of plastic built specifically for the Apple Wireless. Take a look at this two minute video for a visual reference of the nimblstand's design (and, no, there's nothing wrong with your audio; the clip is meant to be silent):

As you can see, unless you've got a good knockoff, a non-Apple keyboard simply won't fit. This works okay for me, since I already use this particular keyboard, and if you already own one (say, if it came with your iMac), it will work just fine for you too.

You may have also noticed that the devices shown in the video were largely case-less. This was not a stylistic choice on the part of its makers, as only the thinnest of protectors will fit into the nimblstand's slot. Furthermore, even if the encased tablet does fit, the added thickness changes the angle of the screen, making it more vertical and, therefore, harder to see when resting on your lap (though my height might have something to do with this; I'm 6 foot 3, and my partner, who didn't have the same issue, is 5 foot 9). If you're currently rocking a full cover and case on your device, but you also want to use the nimblstand, you might find yourself constantly removing and replacing your protection. If this doesn't sound appealing, nimblstand may not be for you.

I've yet to find a keyboard stand that matches this product. Lap typing...is comfortable in pretty much every setting, despite the fact you're locked to one viewing angle.

But even if this is the case, or you're currently going naked with your device but using another Bluetooth keyboard, you might want to consider switching things up, because this stand has much to offer. In addition to its versatility (which I'll jump back to in a second), nimblstand is perfect for the environmentally-conscious writer, in that it's built to outlast not just average wear and tear and the passage of time, but also the ever-changing designs of tablet devices; it's a universal keyboard stand not just for today's technological landscape, but tomorrow's as well. Even when nimblstand's current form won't support a particular model, the company provides free modification kits to ensure their product's relevance (as they did for the iPad Air). You can read more about the durable materials and nimblstand's longevity on the company's Sustainability page.

As for practical usage, I've yet to find a keyboard stand that matches this product. Lap typing, as previously mentioned, is comfortable in pretty much every setting, despite the fact you're locked to one viewing angle. Not only this, but I successfully used the nimblstand while I was laid up on the couch with a pinched nerve in my back, a recurring malady that has plagued me for years and has always left me incapable of working in any capacity. Not so with nimblstand, which allowed me to keep writing while I was down for the count (and comfortably watch Netflix too). Overall, I haven't come across a scenario where the nimblstand didn't come in handy.

I've hinted at this already, but it's worth repeating: though this product was designed with the iPad in mind, it works with a plethora of other devices—ninety-nine percent of all tablets, according to the website. So whether you're an iPad user or a devotee of Kindle Fire, Samsung Galaxy, or any other tablet with word processing capabilities, nimblstand has you covered. Also, because Bluetooth is universal, the Apple Keyboard will work with whatever device you've committed to.

So how much does this thing cost? The nimblstand runs $39.99 plus shipping (which amounts to about seven bucks). For another seventeen dollars, you can also purchase a Wacom Bamboo stylus alongside the nimblstand, which is much cheaper than buying one individually, and you further help the environment by cutting down on packaging (i.e., trash). All orders are processed through the company's website.

So what do you think? Does the nimblstand sound like the keyboard stand you've been looking for? Or have you found other solutions that work better for you? Let us know your thoughts in the comments section below. And, as always, if there's a product similar to this that you love, and you'd like to see it featured as a LitReactor Product Review, send an email to tech@litreactor.com with a link, and you just might see your precious covered.