Column by Christopher Shultz February 26, 2015
In: 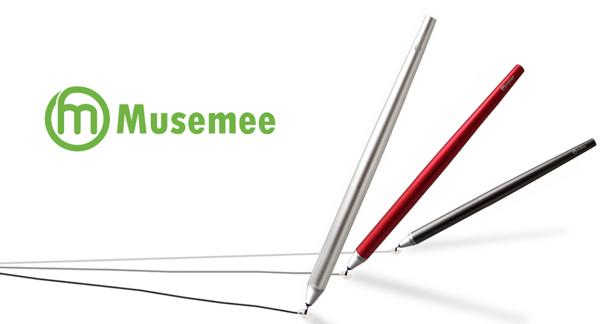 Just over two years ago, I wrote a column for LitReactor called Paperless Writer: Five Steps To A Successful Digital Rewrite. In it, there was mention of my preferred tablet stylus, the Pogo Sketch Pro, because of its lightness and thinness. Well, times change, and now there's a new love in my life: The Musemee Notier V2. Why? Primarily, while the Notier is thicker and heavier than the Pogo, it doesn't feel that way, and overall it's the closest match to a traditional pen I've ever encountered, primarily due to the clear disc design of the tip (which I'll explain in more detail below). And while the Notier isn't exactly cheap, it costs roughly half the amount you'd pay for the Adonis Jot Pro, the stylus's more famous correlative.

Let's dive right into the specifics of the Notier, starting with a little info about the company that created it.

As stated on their Facebook and Twitter pages, Musemee focuses on "creative and fashion products." They "integrate the latest technology to provide the most luxury and sexy stuffs." So, it's clear from this and other blurbs on Musemee's website that English isn't their first language; nonetheless, I love this company description. Sexy stuffs! Check out their website for more info. 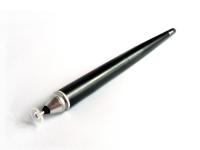 Clear Disc Nib: This has to be the best feature of the Notier. Most styluses utilize a fat, round rubber tip—called a nib in the stylus world—which suffices decently enough, but makes it hard to see your lines as you mark them. Not so with the Notier. Instead, the rubber component is only about as wide as a 0.5mm pen, and it is attached to a clear plastic disc about 0.4 inches in diameter. This design creates the same level of conductivity necessary for capacitative touch screens (the common tech used for most tablets and smartphones), but it allows you to literally see through the nib. This creates the closest analog to writing with a pen I've encountered so far. The nib is also replaceable, so if you wear down the first one, you can continue to use the Notier.

Cap Design: Many styluses on the market offer zero protection for the nib, yet this is crucial to ensuring the longevity of your purchase, particularly with Notier's clear disc design. Fortunately, Musemee thought of this already, and created a rather ingenious solution. The "cap" is actually the base of the stylus—to access the nib, you simply unscrew the base, flip it around, and screw it back into place. This not only protects the nib from wear and tear when inside a bag, but it also ensures you'll never lose the cap.

Thinness: The base of the Notier V2 (just above the writing tip) is 0.5 inches in diameter. A little more than halfway across, the body gradually slims down, ending at a 0.3 inch diameter. This design keeps the pen from feeling too heavy in the hand.

Lightweight: At just a little under 2 ounces, this stylus feels like nothing at all. Not too clunky, but at the same time, its metal construction gives the Notier a solid and reliable feel, as opposed to some styluses out there that just feel cheap and breakable, making you afraid to even use them.

Personally, I have no complaints. There are many people on Amazon who insist their nibs broke within the first day or two of use. I suppose it's possible they received duds, but I've been using my Notier fairly heavily for the better part of a month now, and my original nib is still going strong. Perhaps these people are simply pressing down on their tablet screens too hard? 'Cause, you know, you don't have to do that.

You can pick up a Notier V2 (or their newest model, the Notier Prime) at Musemee's website, or via Amazon (link below). Three colors are available: black, silver and red. It will cost you about $15.95 plus shipping, and each Notier comes with one replacement nib. Yeah, it's more expensive than your garden-variety Walgreens stylus, but compared to the Notier's aforementioned famous big cousin, the $30 Adonit Jot Pro, and given the overall quality of this product, I'd say it's a price worth paying.

Anyone else use the Notier V2? How about the Adonit Jot Pro? Another stylus altogether? What do you like about it? What do you dislike? Let us know in the comments section. And of course, if you have any other writerly product you'd like to see reviewed here, send an email with a link to tech@litreactor.com and I'll check it out.