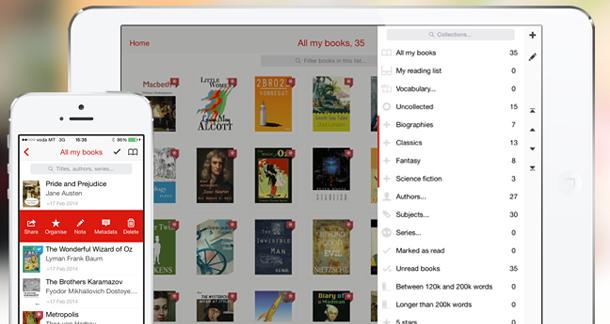 We all know the two big eReaders on the market right now, Kindle and Apple iBooks. I have no actual numbers behind this statement, but most of the people I know use (sometimes religiously) one of the two, with generally more Kindle fans due to the wider selection. And yet, many of those people use Amazon begrudgingly—they like the broad selection, low weight and simple note-taking/highlighting capabilities of eBooks, but they're not fans of Amazon's business practices. They'd much prefer to purchase books elsewhere and read them either through their Kindle device/app, or through some other eReading application.

And sure, there are ways of doing this. Searching "eReader" in the Apple App Store pulls up multiple third-party options that allow you to import books purchased or downloaded from other locations. But none of these apps (which shall remain unnamed here) are particularly outstanding, ranging from a scale of "downright awful" to "pretty okay." And while it's much easier to open indirectly-purchased books in iBooks, there are a few features in the Kindle app that push it ahead of Apple's eReader. What would be great is an application that combines ease of accessing books purchased from third-party sources (especially DRM-free titles), but also gives users a feature-rich reading experience.

Assuming you've read the title of this column, it should be obvious by now that Marvin—an iOS eReader for iPhone, iPod Touch, and (of course) iPad—meets these demands. But just how well does this app rise to the challenge? Does it merely meet expectations, or does it exceed them?

Read on to find out (here's a hint: it exceeds expectations).

Marvin was developed by Kristian Guillamier back in 2012. He founded the developing company Appstafarian for the sole purpose of creating an eReader app for iPad that suited his personal needs. In an interview with Piotr Kowalczyk for eBook Friendly, Guillamier said he

quickly became frustrated with the limitations of existing apps [for iOS] – at the time, some of the more popular ones didn’t even let you change fonts! I knew that a responsive touchscreen device could make the eReading experience so much more enjoyable.

...I convinced myself that I could do it. I bought a Mac, taught myself how to write iOS apps, and started working on Marvin...

Two years and numerous feature upgrades later, Guillamier and his team at Appstafarian have created an eReader "geared more towards people who are already comfortable around apps and want more powerful reading tools," i.e., serious eBook connoisseurs. They've done a bang-up job too, so much so that Cult of Mac named Marvin the Best eReading App for iOS in a recent round-up.

So just what is it about this application that makes it so great? Let's dive into that now.

Presented in no particular order:

No DRM—Yep, Marvin is a DRM-free application, which means, among other things, you aren't restricted to proprietary file types that you don't actually own (like with Kindle).

Free Books!—As a sort of tutorial for using Marvin (in addition to all the help articles on Appstafarian's blog), five public domain books are preloaded into your library: The Wonderful Wizard of Oz, A Study in Scarlet (Sherlock Holmes), Metropolis, Treasure Island, and The War of the Worlds. Dude.

Fonts!—Twenty-seven of them in all, well eclipsing the number of fonts available in Kindle and iBooks combined. One in particular, OpenDyslexic, described on the Marvin blog as "a great specialty font designed to increase readability for readers with dyslexia," is not available in the "Big Two" eReading apps.

Themes—Marvin provides the requisite "night mode," but goes even further than that, giving you seemingly endless text and background color options. 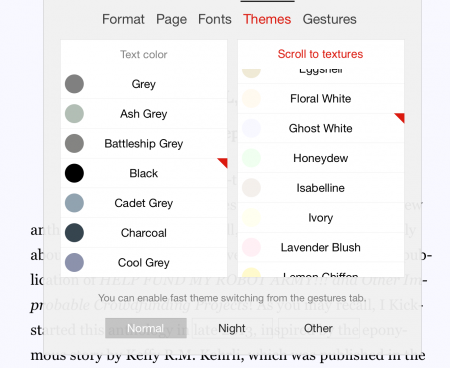 Layout Control—In addition to choosing which font suits your eyes the best, in Marvin you can also customize margin width, line spacing, paragraph indentation, paragraph spacing (or, how much white space between paragraphs), justification (or, whether the text fills the margins to the brim, or whether the text wraps-around), and hyphenation (whether words hyphenate at the margin border or wraparound).

Gestures—Most eReaders let you tap or swipe to turn the page, but with Marvin, these gestures can be as simple or complex as you want them to be. Take a look at the photo below, and you'll see what I mean. 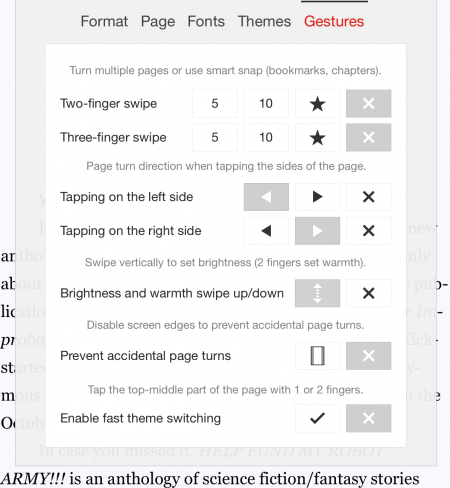 Dictionaries and Vocabulary—In addition to the built-in Apple dictionary, you can install the Oxford Dictionary of English, the New Oxford American Dictionary, and a plethora of foreign language dictionaries. You also have the ability to search the web for any word your in-app dictionaries can't find. Plus, Marvin saves every word and phrase you look up into a Vocabulary list, which you can access later to review all those shiny new words you learned.

Collections—Want to group all your horror novels—or, as I've done, all your lit mags—into one accessible place? Marvin lets you group your books any which way you like. 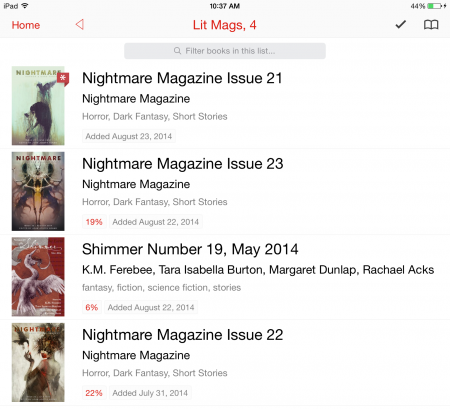 Reading Timers—Want to make sure you're getting in exactly an hour of reading every day? Marvin tells you how long you've been reading every time you exit out of a book, taking into account instances in which your device has gone to sleep. You can also set specific reminders that nudge you when it's time to put the book down. A great feature for people who get lost in novels and forget about the bath they were about to take, or the pot gradually boiling on the burner.

Highlighting and Annotation—Standard features for any eReading application, but of course Marvin takes the concept further than its competition by allowing you to share your notes via Facebook, Twitter, or email, which means you effectively have a way of backing up your notes as a safeguard, should anything unfortunate happen to your eBooks. Students will no doubt love this feature.

Deep View—Perhaps the most unique aspect of Marvin, this feature "reads the book with you," so to speak. Deep View provides a list of character names and their frequency within the text and allows you to search for and "pin" articles about the novel and/or author for further study. Any article saved is accessible via Marvin's built-in web browser. Again, great for students or anyone who wants a more immersive reading experience. 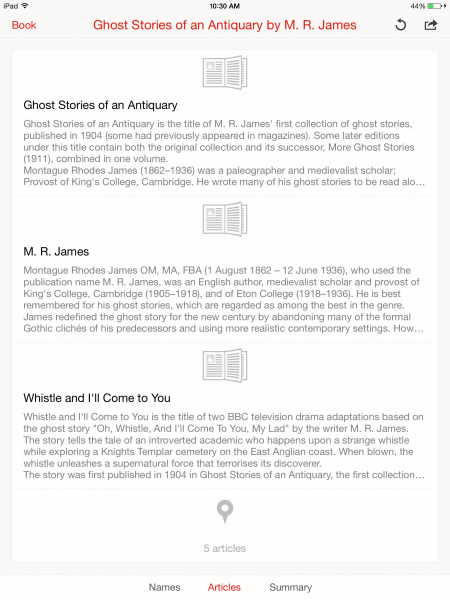 A few, and they're minor:

Cloud-Syncing Between Devices—You may run into a slight snag if you frequently read books on multiple devices. With Marvin, if you add a book to your library on your iPad, for instance, it will not automatically show up in the library on your iPhone. You have to manually add the book to both devices. Once this is done, however, you can sync your position within the text. Slightly less convenient than Kindle and iBooks, but not a huge deal.

Highlights and Notes Problems—Here's where the syncing issue gets a bit dicey. While Marvin will remember your position across multiple devices, it will not  keep track of your highlights and notes. So if you mark a passage on your iPad and write some thoughts in the note box, you will not be able to see either on your iPhone. According to the folks at Appstafarian, they are working on fixing this issue, but for now, your access is limited.

No PDF Support—Marvin is an ePub reader, period. And for good reasons. In the aforementioned eBook Friendly interview, creator Kristian Guillamier explains why:

PDF is a format dedicated to recreating the printed page on-screen. This means that users don’t have the control they’ve come to expect in Marvin.

If I decide to support PDF, I want Marvin to handle it at least as well as it handles ePUB books. It’s an incredible amount of work so it will take some time. At this point, I want to focus on delivering the best ePUB reading experience rather than spreading myself thin over multiple formats.

Obviously, this means that if a particular small publisher offers PDF as its sole digital solution, you won't be able to read said magazine or book in Marvin. However, there are ways of converting PDFs into ePubs via Calibre. The results of this conversion can be anywhere from serviceable to depressing, but it's an option. Really, though, you're better off using an app like GoodNotes for all your PDF reading needs.

No Bookstore—Despite direct access to Project Gutenberg, Marvin is not a place to purchase books, just a place to read them. I hesitate to even include this as a downside, since it forces you to think outside the Kindle and iBooks box and purchase books directly from publishers. Most lit-mags these days offer subscription plans via Kindle, as well as directly through their website, the difference of course being that the latter puts all the money into the pockets of the publishers, sidestepping Amazon's cut. And again, because Marvin supports ePubs without DRM, you own the book forever.

You can download Marvin for your iPad, iPhone or iPod touch via the App Store. The full version costs $3.99, and it allows you to import as many books as your device's storage space can handle. If you so desire, you can also buy additional themes within the app.

Still on the fence? Then check out Marvin Free, which is pretty much exactly the same as its more costly counterpart, except that you're limited to one book at a time.

What do you think? Does Marvin meet your eReading demands? Or are you just fine with Kindle/iBooks? Don't do eBooks at all? Tell us what you think in the comments section.

If you know of a similar app or any writerly product you'd like to see featured here, send an email to tech@litreactor.com with a link.

I have an iPhone and I fancy trying this. I'm a champion of the ePub format so that's actually not a disadvantage for me (I have a Nook so everything I download is ePub.)

Valuable post , For what it's worth , if you requires to merge are interested in merging of , I came across a service here http://www.altomerge.com/

To guarantee whether you are getting the most perfectly awesome yield from your online degree or not, various schools offer you an exceptional element of conveying close by your instructors on the web. You need to hire BestEssay online. This is drilled by using different ways.