Column by Christopher Shultz November 18, 2014
In: 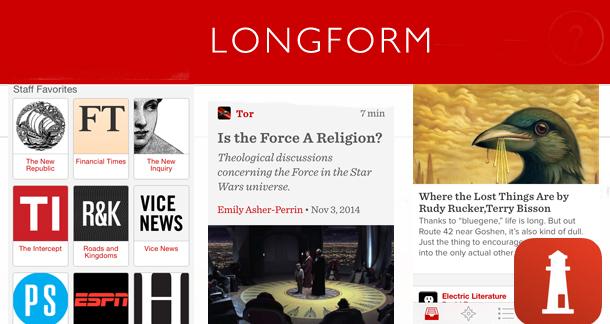 We live in a truly amazing technological era. I've already forgotten about the time before, when you couldn't literally ask Google a question and get an answer in seconds. Unfortunately, information comes fairly cheap these days, and you have to take anything you read online with a grain of salt. You could be reading an article about the benefits of a high salt diet, for instance, only to discover it wasn't an article at all, but a paid advertisement by Big Salt PR men, made to look like an unbiased piece of journalism.

That's maybe the most egregious example of bad information floating around the interwebs (and as far as I know, there is no Big Salt lobby). You often have to navigate through a sea of ill-researched (or, if researched, then un-cited) content, published on websites that are not closely monitored and therefore susceptible to trolling (I'm looking at you, Wikipedia), to say nothing of the deluge of fluff and time-waster sites like BuzzFeed that are so popular with the kids.

Now, don't get me wrong, I let myself get snatched up by the listicled and quiz-bearing arms of BuzzFeed and HuffPo just like everyone else. Willingly. There's a time and a place for fluff (read: fun), and I don't begrudge its existence. But detailed, well-researched reportage still has its place too, and it would be great if the latter were as widespread and accessible as the former.

Fortunately, journalism-with-a-capital-J has friends in the creators and developers of the aptly-named Longform, a free app for iOS devices that aggregates news, articles, columns, editorials—anything and everything that meets the non-BuzzFeed-like criteria mentioned above. Finding more meaty reads just became a whole lot easier.

Longform's history dates back to 2010 with the website Longform.org, created by Aaron Lammer and Max Linksy. According to Lammer, the inspiration behind creating the site sprung from a simple desire to share their personal favorite articles:

We've always wanted to connect readers with great writing as part of a daily routine. When we started [Longform.org], both myself and co-founder Max had gotten iPhones for the first time and were reading a lot on our commutes...Since we were hunting for articles daily, we thought it would be worthwhile to make our recommendations available to others.

Two years later, the team released the mobile iteration of Longform in response to the increasing prevalence of the smartphone:

In terms of where people are going to read...nothing beats the convenience of the phone. The majority of consumption is going to gravitate towards the screen that is in your pocket 16 hours a day. We saw that Longform's audience was nearly 50% mobile and built our app accordingly. We'll go wherever readers go, and the phone is the best screen for the majority of readers right now.

Longform received a spiffy new update back in September of this year, which added a slew of new features, such as...

Personalization was the focus of Longform's recent update. As Lammer notes:

We built our app so that we could put our recommendations directly on readers' devices so that it's waiting whenever you need it, whether that's on a flight or a lazy Sunday afternoon. We also have built new functionality that lets readers customize their Longform experience by following writers, seeing what friends are recommending, and bookmarking stuff to remember for later.

You're not only able to follow specific writers, but individual publications as well. Currently I keep up with Tor, Electric Literature, the New Yorker, and The Guardian, among others, and there are a ton of options to choose from (with more being added regularly). Right now, the publications available to follow are mainly focused on nonfiction, but Lammer tells me that's changing, as there are now two fiction editors on their team. 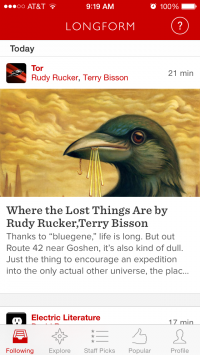 If you don't know what to read at any given moment—or if you've already made it to the bottom of your follow list—just tap the "Explore," "Staff Picks," or "Popular" icons (located at the bottom of the screen, dock-style) and you're sure to find something interesting to consume.

Over in the "Profile" section of the app, you can connect to Facebook, Twitter and your iPhone's contacts to find friends also using Longform, as well as get a detailed view of your follow list (you can delete publications/writers here too, if you so choose). The "Settings" icon in the top right corner lets you further customize your reading experience by selecting how articles automatically appear—web page or Read View (more on this in a second), whether or not you want images to appear, and so on.

When you tap an article to read, you're presented with further options, such as the aforementioned "Web" or "Read" buttons at the bottom of the screen. Web is exactly what it sounds like—an exact representation of the publisher's formatting as it would appear on their website—While Read View is a borderless, text-and-image only reading experience similar to those of article-queuing services like Instapaper and Pocket. Here you can select your preferred font size, whether the font is serif or sans serif, and toggle between day and night modes.

Tap the "Bookmark" icon (which will look familiar if you're a Kindle user) to save an article for later reading. The "Thumbs Up" icon recommends the article to any of your followers, while the "Share" icon lets you send the piece out via email, Twitter, Facebook, Evernote, etc. And because this function utilizes the expanded share screen in iOS 8, you can even save the article to Pocket and Instapaper (though Longform's Read View has both those services beat).

And of course, if you read a particular article and really dig the writer's work, their name is hyperlinked to a Longform profile, where you can follow them instantly.

As the developers tout on their About page, Longform is "100% Free." It is only available on iOS for now (download it here). Lammer says an Android version of the application is in the works, but at the moment they have no expected release date. Luckily, Longform.org looks great on mobile devices, so if you can't download the app, you can at least check out the curated content there (though you won't have the all the customization bells and whistles). You can also keep up with Longform via their Facebook and Twitter accounts.

Any Longform users out there? What are your favorite features? Do you use a similar app? Better or worse? Let us know what you think in the comments section.

And as always, if there's a nifty bit of software or writerly product you'd like to see featured here, send an email to tech@litreactor.com with a link, and I'll be sure to check it out.