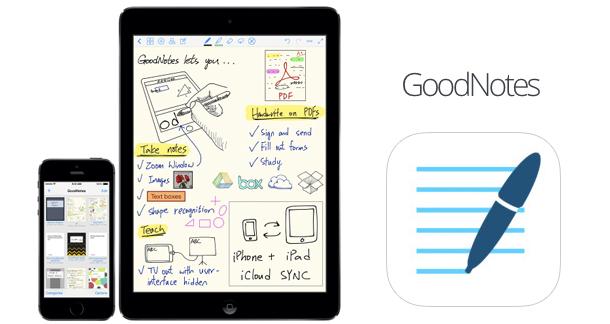 My very first column here at LitReactor, Paperless Writer: Five Steps To A Successful Digital Rewrite, covered the basics of using tablets, styluses, and PDF reading/editing apps for longhand proofing of your various manuscript drafts. In the article, I recommended using pdf-notes Free—an iOS app that allowed you to import and mark-up PDF documents with an array of pen gauges and ink colors. Now here we are nearly two years later, and while I still have nothing negative to say about the above app, I've since moved on to a slick bit of mobile software called GoodNotes (an app I touched upon in another previous article, Digital Longhand: 4 Handwriting Tips for Tablets). Why did I switch, and to a program that costs money (gasp!) no less? There are numerous reasons, all of which I'll get into below. But first, let's go over the history behind this app.

GoodNotes was developed by Time Based Technology Limited, a company that doesn't seem interested in "spreading its seed," so to speak—they dedicate all their time to updating and improving GoodNotes (a good thing, I think). According to AppAdvice, the app began life in 2011 as eNote Taker, which appears to be a cheaper, stripped-down version of the software now available.

GoodNotes lets you take handwritten notes, sketch diagrams, mark-up PDFs and organize them on a beautiful bookshelf. Turn pages with a swipe, highlight or add notes to any page, and share your notes with anyone. GoodNotes will automatically save your notes and has full backup function to prevent data loss.

Now, let's talk a bit more extensively about these features, and how they relate to manuscript editing, as well as reading/note-taking with eBooks in PDF format. 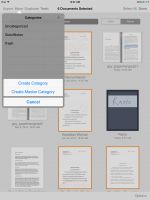 Appearance—Perhaps my favorite feature of GoodNotes is its clean and simple interface. While annotating PDFs, the toolbar sits unobtrusively at the top of the screen, but it's also collapsible if you need it out of your way. The menu page is similarly lean and, thankfully, not littered with ads.

DOC Import—If you primarily use the .doc extension (Word format), you don't have to pre-convert your files before importing them into GoodNotes. The app does this automatically. You can then export the document as PDF if need be, which also means if you're on-the-go and need to perform a quick DOC-to-PDF conversion, GoodNotes has you covered.

Categorization—If you have a ton of PDFs, you can assign categories to each document for quick and easy filtering. This feature comes in handy if, like me, you're using the app both for manuscript mark-up and PDF eBook reading. You can also create a Master Category, which can essentially be used as a folder to house various versions of the same document (i.e., multiple drafts of a single story), thus reducing clutter significantly.

Notebooks—You can create infinite notebooks, with customizable covers and paper options. If you're a longhand writer, this is absolutely essential, because these notebooks are basically digital journals. They also come in handy for students. Blank pages are also an option, so GoodNotes can function as a bare bones sketch pad as well.

Backup—GoodNotes offers a plethora of automatic syncing and backup options, including support for Dropbox, iTunes, email, Google Drive, and more.

Add Pages—In the days of printed manuscripts, I would often rewrite a scene and need an extra sheet of paper to finish scribbling out my adjustments. When I switched to a digital platform and began using pdf-notes Free, I lost the ability to add pages (while you could mark-up a PDF in that app, you could not alter its length). This was the #1 reason I began using GoodNotes. To add a page, tap the "plus sign within a circle" icon on your toolbar.

Customizable Pens—Choose between ball or fountain and a range of colors and tip grades. So if in real life you use a 0.5 blue ink ballpoint, you can use that in GoodNotes. The highlighter functions similarly, in that you have a range of colors and tip sizes from which to choose. Great for reading PDF books and highlighting text. You can also add a text box and type out your comments/revisions—rather than handwriting them—thus saving time.

Reader Mode—Easily toggle between editing and reading modes, to keep from making accidental marks on the page.

Writing Posture—This function creates a sort of "dead space" on your iPad's screen, allowing you to rest your palm without fear of accidentally marking up the document or making unwanted changes. You can alter the angle of this dead space to match the natural position of your hand, including support for lefties. (This feature works fairly well, but I still prefer to wear my customized thumb-and-pinky glove, which allows me to move my hand wherever I please, and doesn't smudge up my iPad screen as badly).

See the online User Guide for a more extensive breakdown of GoodNotes's features.

Honestly, I have nothing to say here. I mean, I suppose the drawing functions could be a bit better, but at the same time, GoodNotes wasn't  developed for intensive art-making, but rather for doodles and quick sketches. If you want more than that, go with ProCreate (yeah, it's called that) or any other dedicated painting app.

GoodNotes is an iOS-only app, so unfortunately, if you're a non-Apple user, you're out of luck here. The app will cost you $5.99, which seems like a lot, until you consider all that GoodNotes can do. Plus, this is a universal application, so you can download to every device you own (and I hear a desktop version is on the way). There is no stripped-down, try-before-you-buy version (and this is a downside for sure), so if you're still on the fence, you'll have to rely on good faith.

Anyone else here use GoodNotes? What's your take on the app? Do you use a similar-but-better PDF annotator? Shoot an email to tech@litreactor.com and maybe we'll feature it here (or any software/product you're enthusiastic about).