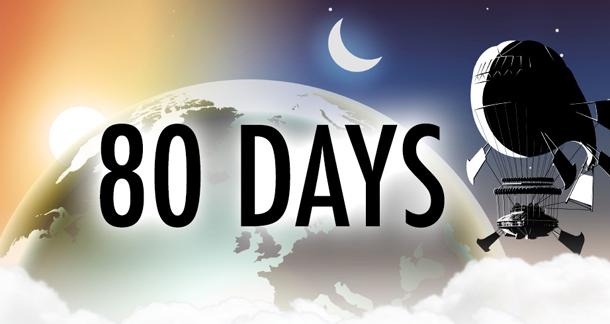 Have you ever read a classic novel and wished you could actively control the narrative's direction like a Choose Your Own Adventure book? The creative minds at inkle, a mobile gaming and software company, must have felt this desire, because they've created a game that gives you control over a hallmark work of science fiction: Jules Verne's Around the World in Eighty Days. Retitled 80 Days, inkle's creation absorbs players with beautifully simple graphics and surprisingly well-written prose.

We'll get into the ins and outs of the game in a moment, but first let's talk a bit about the company behind it, inkle.

Humfrey's duties "involve a combination of visual design and programming, allowing a synergy between the two disciplines that is rare in the industry." He previously worked on Nintendo DS, Playstation Move and Xbox Kinect.

Ingold focuses on content, "working from the initial outline, through the development of the authoring tools, to the writing and scripting of final content." He is also "a published author of short stories and over a decade's worth of award-winning interactive fiction."

Since 2011, inkle has released several games, including CYOA-style titles Sorcery! and Down Among The Dead Men.

As you might guess, if you've ever read a Choose Your Own Adventure novel, you'll immediately understand the gameplay of 80 Days. You play as Passerpartout, valet to rich English gambling man Phileas Fogg. The direction of the narrative, even your character's demeanor and sexuality, are shaped by the decisions you make.

Your primary concern is, of course, ensuring you and Fogg make it around the world in the allotted time so your master can win his wager. As a sub-goal, you must also manage the funds, which start at £4,000 and diminish as you pay for travel and hotels. You can buy and sell items at the Market to increase funds, or if matters become dire, you can borrow money from the Bank (although both this and the Market may not appear in smaller or more remote locations). Last but certainly not least, you must ensure Fogg remains in good health throughout the journey; moreover, bad behavioral decisions can really piss your master off, so watch out for that, too.

Check out this introductory video for a better idea of how 80 Days works:

Design and Gameplay: Humfrey's console gaming background shows in 80 Days, which is a rich and personally engaging experience that feels as expansive as a big platform game. And yet, the overall design suits itself wonderfully to the small-screen mobile gaming landscape. It features simple graphics with an overall steampunk aesthetic, text, music, sound effects and animations reminiscent of the map montages from the Indiana Jones films. Just like with Choose Your Own Adventure novels, to advance the game, the player must tap on various sentences that appear at the bottom of the narrative. There's really nothing more to it than that, but the beauty of 80 Days is its simplicity. It doesn't feature blow-you-out-of-your-seat special effects because it doesn't need to. 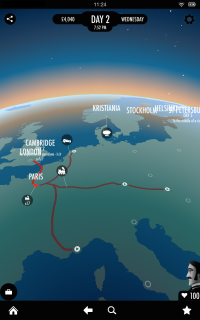 Writing: It's no surprise to me that Ingold is a fiction writer as well as a game developer. The prose in this game is refreshingly lush without distracting from the key narrative, making 80 Days not only fun to play, but a joy to read. Take this passage for example:

The white pyramid in the middle of the desert was alight with coruscating violet electricity...

Play On Your Time: Given that you have a goal of eighty days to travel around the world, there are obviously time constraints you must mind. However, locking your device or closing out of the app freezes gameplay in place, so if you have other things to do (like go to work, for instance), you don't have to worry about getting to the next destination before quitting.

Variation and Staying Power: With 150 cities to explore, and numerous narrative strands to choose from in each destination, it is more or less a guarantee that no two trips around the world will look exactly alike. And because the graphics and gameplay are so charming and the writing so absorbing, it's also a given you will want to play 80 Days over and over again. I've been around the world twice now, though only once did I do so in eighty days. I've also killed Fogg more times than I can count.

Just one: as you might expect, this game is super addictive.

80 Days is available on all Apple iOS devices, Android phones and tablets, and Kindle Fire. The app costs $5.00 (technically $4.99 for Apple). As far as entertainment value outweighing the monetary cost of a game, 80 Days takes the cake.

Have any of you LitReactor people played 80 Days? What do you think? Are there similar interactive reading experiences you'd like to share? Sound off in the comments section below. And of course, if you have any other writerly product you'd like to see reviewed here, send an email with a link to tech@litreactor.com and I'll check it out.