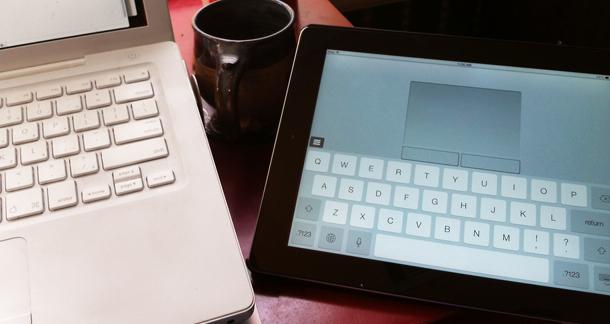 Despite the widespread availability of Bluetooth keyboards and keyboard cases, we sometimes inevitably find ourselves using the built-in, onscreen keyboard of our various tablet devices. Perhaps you need to type out a quick email, or jot down an idea for a story that randomly popped into your head at three o’clock in the morning, or you simply can’t be bothered to fire up an external keyboard. Whatever the scenario, your onscreen keyboard handles the task just fine, thank you very much.

But what about long-term typing projects? Over time, typing quickly and accurately on the onscreen keyboard gets easier the more you do it, and there are some nifty little tricks up the onscreen’s sleeve that put physical keyboards to shame. Is it possible to cut away completely from another piece of hardware to lug around, and exclusively use the iPad’s built-in keyboard option? I’ll weigh some of the pros and cons of both, and attempt to solve this first-world problem.

A quick note: every feature below is available on Apple’s iOS and OSX operating systems. There may be corollaries for non-Apple tablets and PCs, but I own neither, so I won’t be discussing them today.

It used to be, on desktop word processors, making an accent aigu over the letter e (é), or an accent grave over the letter a (à) was a complicated process involving mutli-key shortcuts and/or accessing a Special Characters menu. Not exactly efficient. iOS changed all that, allowing users to simply have their finger on a given letter to access multiple accent marks across different languages. Like so: 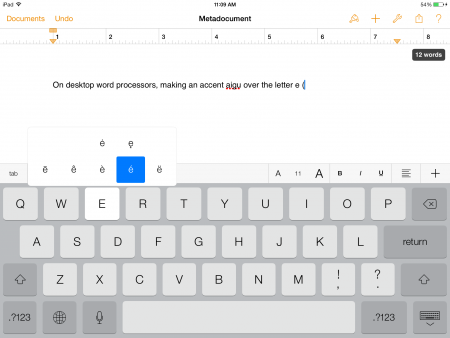 Holding down a key on a desktop keyboard once resulted in this: eeeeeeeeeeeeeeeeeeeeeeeee. Thankfully, OSX now mirrors its mobile counterpart, and a pop-up menu now appears. Observe.

Note the numbers below each new iteration of the letter i. Yep, you have to tap the corresponding digit on your keyboard to make the new character appear. This isn’t nearly as fluid an action as gliding your fingertip along the screen to make your selection, but it is nice to finally have this more convenient feature available in a desktop landscape.

WINNER: I’m going with the onscreen tablet keyboard here simply because  it’s the one arena where all features converge. You’re able to tap and hold any key to access other character options without repetitious keystrokes, and you’re able to select said characters more efficiently on the touchscreen platform than on a traditional desktop.

While both analog and digital keyboard platforms easily switch between English and French or German or what-have-you from a spell check perspective, only the tablet keyboard has the ability to transform its layout to match the appropriate country. A single tap on the ‘world’ icon will toggle between the languages you check in the iPad’s setting (or, pressing and holding the icon will allow you to specifically choose your desired language). 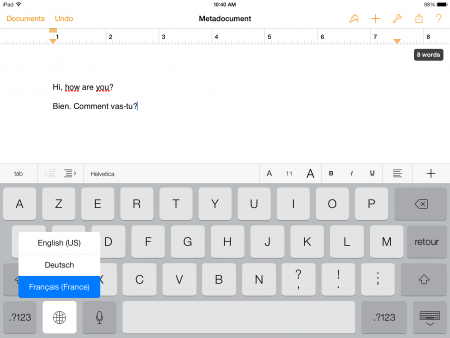 Note that, while in French mode, the keyboard changes from QWERTY to AZERTY.

DOUBLE-TAPPING THE SPACEBAR YIELDS A PERIOD AND SPACE

You may or may not know this, but when you’re tip-tapping away on your iPad, you don’t have to tap the period key at the end of your sentences. As the title of this section implies, simply double-tap the spacebar, and a period-space combo will automatically appear in the text. Pretty cool, huh?

Yes, physical keyboards have a dedicated period key, and it’s pretty convenient, all things considered. However, once you get used to typing the tablet way, i.e., by double-tapping the spacebar, you realize that this method allows you to keep your hands a bit more rested than the traditional way. Think about the motion your hand has to make when striking a period. Your ring finger on the right hand has to descend at an angle to reach that key. However, by double-tapping the spacebar, your hands remain more or less in the same place. It's less awkward a key execution than with the traditional way.

You're probably saying, but desktop keyboards don't work that way, so this is a pointless comparison/contrast. Well, it turns out, you can set up a shortcut to accomplish the exact same keystroke. On your Mac, go to System Preferences > Languages and Text and click on the "Text" tab. You'll see a list of text and numerical substitutions, like this: 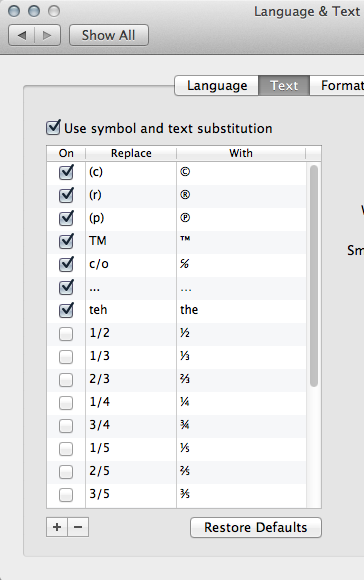 Well, almost. The shortcut works in every application EXCEPT word processors (where we need them most, yeah?). It will work in TextEdit and other rich text-based software, but not Pages or OpenOffice. It might work in Word, but I don’t currently have a copy of that program. I’ve yet to find a solid reason for this, but there it is—if you’re using a word processor, no spacebar shortcut.

And that’s why I’m ultimately not an advocate of scrapping traditional typing lessons. For the same reason we have to first learn the “rules” of fiction writing, and then break them when necessary, learning to type the old-fashioned way is a must, not just for writers, but for everyone. We have to be prepared to fluidly work with systems that won’t allow newfangled shortcuts. Absolutely, find the method that works best for you, but not before you’re thoroughly versed in the universal, foundational method first.

WINNER: After that lengthy diatribe, it’s a tie, with tablets having a slight advantage over desktops, in that you can execute the double-tap spacebar shortcut in mobile word processors.

THE BIG ONE: TYPING SPEED AND ACCURACY TESTS

Alright, we’ve been munching on appetizers up to this point, but now it’s time we moved on to the main course. Little tricks and features are nice, but what about actual typing speed and word accuracy? How quickly can one tap-type on a tablet screen, and how much is auto-correct actually correcting?

First off, auto-correct is a godsend. I find it does a pretty nice job of figuring out what I wanted to type (though, of course, every now and then it’s way off base). For the purposes of accuracy, I needed to shut it off. In case you’re wondering how to do this on your iPad, it’s Setting > General > Keyboard, then just uncheck Auto-Correction. Now, if you prefer to leave all your typos in and fix them yourself later, you’re all set.

Second, while online typing tests are a quick and easy way to clock your speed on a desktop (TypingTest.com is the first hit on a Google search, and it’s a good one), these typically Flash-based interfaces are no good on iOS. Fortunately, as they say, there’s an app for that, and it’s especially designed for a tap-typing platform—fittingly, it’s called TapTyping. Developed by Flairfly, it’s free to download and gives you unlimited access to the basic typing test (there are paid options to further train your typing skills, but of course you don’t have to buy these).

So, according to TypingTest.com, on a physical keyboard I type 73 words per minute, with an 87% accuracy rate. Not too shabby, if I do say so myself. But what about the onscreen keyboard? Does my speed and accuracy even compare? Well, according to TapTyping, I can hammer out 38 wpm with 98% accuracy: 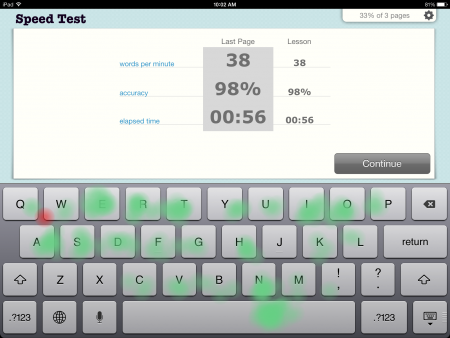 See the green areas on the photo, plus the red dot situated between the Q and W keys? That’s my accuracy vs. problem keys ratio—in other words, I hit all those green keys without issue, but the Qs and Ws bedevil me. Still, this isn’t bad, all things considered, and 38 wpm is still slightly above the average speed, according to TypingTest.com, of 36.

The results seem to favor onscreen tablet keyboards, which beat out physical keyboards in two of the four categories, and tied for the double-tap shortcut. But really, I feel it’s an overall tie for the platforms, one because I don’t believe there is one right way for just about any task, and if you’re more comfortable with an onscreen keyboard, then by all means go for it.

For two, Bluetooth keyboards can be used in conjunction with your onscreen tablet keyboard. Just hit the eject button on the physical keyboard, and the previously hidden digital counterpart will spring to view, allowing you to make that nice and fluid accent aigu keystroke on your iPad’s screen. When you’re done, just hit the eject button again, and the onscreen keyboard disappears.

Conversely, if you work on a desktop computer, your iPad can serve as a secondary keyboard, giving you access to all those onscreen tricks described above (except, of course, the double-tap shortcut). To do this, you’ll need the Air Keyboard iPad app and desktop client. Install both, launch them, and voila! A sidekick onscreen keyboard for your desktop typing experience (see header image at the top of this column). There’s versions of the client for Windows and a few other operating systems as well, so even if you’re an HP enthusiast who uses an iPad, you can take advantage of this dual keyboard harmony.

So as you can see, there’s really no need to declare one victorious over the other: you can have the best of both worlds, regardless of whether you use an iPad or a computer as your primary writing device.

What’s your preferred method of typing? Are there any full converts to onscreen keyboards out there? Or, are you like me, and see the advantages to both? Let us know your thoughts in the comments section below.

Crushes it, in my opinion :) Though I haven't given tablets a shot in earnest.