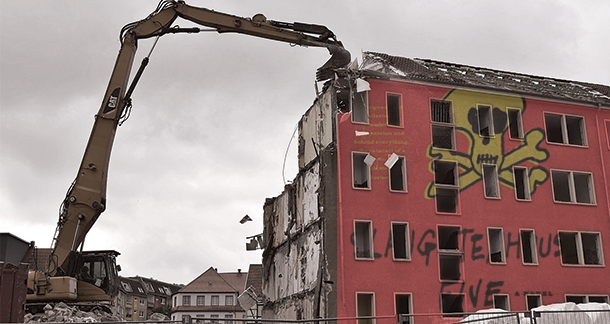 Deconstruction is the hottest trend in literary criticism since, well, forever, and even if you don’t know what it is, you’re probably doing it.

And I come to you today with a simple request: Stop.

What Is Literary Deconstruction?

The first problem here is talking about what deconstruction is, in terms of books.

This is a problem because “deconstruction” is a term used by lots of fancy people in fancy ways. French dudes made it up, a sure sign of fanciness.

The super quick version of what those French dudes were saying: Any story can be broken down into its component parts, and doing so proves that nothing has inherent meaning.

But that’s a version from 1967. And while that’s not a MEGA long time ago in years, it’s a VERY long time culturally.

Today, deconstruction has a different meaning that I’ll define like this:

Deconstruction, in literature, is the idea of dismantling a text or taking it apart, breaking it down into smaller elements, to pose different theories about what a text “really means.” This is almost always about pointing out things that are wrong with the text or explaining that the point of view evident in the text is flawed.

When you see something like “Fight Club is really a manual for perpetuating toxic masculinity,” you’re seeing a literary deconstruction.

When you see something like, “Fight Club is the direct commentary of a gay man on masculinity,” you’re seeing a literary deconstruction.

If the theory is based in the assumption that the author achieved an intended effect, then it’s not necessarily deconstruction.

For example, “In Fight Club, Tyler Durden is the ‘real’ character, and the Narrator is the creation of Tyler Durden’s mind,” would be a theory that works within the text without breaking the text down into its components.

It’s not deconstructive. It plays by the rules established in the book and assumes those rules are good and correct, that what the author highlights as important is important, and any subterfuge or hidden meanings were laid in by the author on purpose, not subconsciously.

When Deconstruction Is Applicable 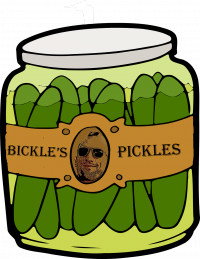 Which means deconstruction is useful. Looking at the filmmakers and studios involved, the box office take for different entries in the series, does give quite a bit of insight into some of the decisions.

When a character from your movie is going to sell oranges, it'll limit the things that character can do. There's a reason BB-8 sells oranges, but you don't see Travis Bickle on a pickle jar. Even though the rhyme is RIGHT THERE!

When the elements outside the story played a big role in the story’s initial shaping, it’s useful to take the story apart, see how it ticks.

Problem 1: This Gets Out of Hand

If you take your car into a mechanic and say, “I bet you can’t find anything that’s worth fixing on this car right now, but if you do, I’ll pay you double,” my suspicion is that mechanic will be able to find SOMETHING to fix on your car. Whether it’s a screw on the rearview mirror, a bulb that was “just about to go out,” or something actually serious, they’ll find something.

Deconstruction looks at books with the assumption that something is wrong. It’s reading with an eye towards figuring out the ways in which an author attempting to convey a message or an idea has done so imperfectly.

When you go into a book ASSUMING something is wrong, and therefore the text needs to be pulled apart, you will, just like that mechanic, find something.

Ready Player One CAN be deconstructed, and the typical way of doing so is to break it down into something like the book being a “Straight, White male power fantasy with one-dimensional female characters, kind of a incel thing.”

The issue I take with this breakdown is that it's designed to prove something super simple: Ready Player One bad.

Deconstructing a book you didn't enjoy in order to prove there's something objectively wrong with it, something in the book's DNA that is flawed, is a silly exercise.

It's a way to simplify the complicated job of talking about a book you didn't enjoy. If you can prove it's radioactive at its core, you don't have to discuss the pros and cons or matters of taste. It simply MUST be avoided.

You're ending a discussion instead of starting one.

Problem 3: Identity Is The Easy Tool

Far too many deconstructionist theories and ideas rely heavily on the identity facets or demographics of authors.

This is based on the Fellini idea:

Identity is always a fine thing to look at, but more and more, identity becomes both the start and end of most deconstructions.

Woodworkers know that there’s a danger in falling in love with one kind of joint: you see it as the answer for everything. You reach for it first, every time. You end up using your favorite joint in the wrong context simply because you don’t push beyond or even really consider others. Before long, you're fucking up your pieces because of your devotion to dovetails.

Deconstruction can be about a lot of things, but modern deconstruction tends to stick to identity as the key that will unlock meaning. It becomes the only tool lots of folks reach for, and the result is that they don't explore other tools, don't spend time considering that other avenues of deconstruction might provide better results sometimes.

Problem 4: The Deconstruction Is Often Less Interesting Than The Original Thing

I'd rather read Slaughterhouse-Five than read a deconstruction of it.

Because it's a great book. It's interesting. It's funny, it's tragic. It's weird.

And a deconstruction of it is usually not very funny, not tragic, not weird, and not interesting.

If your deconstruction of the thing is way less interesting than the thing, eh, skip it.

I reserve a special cut of beef for deconstructionists who pose their theories in order to piggyback off something great and to make themselves look smarter than the author: “Look, maybe I didn’t write Confederacy of Dunces, but if I can tell you about how it’s secretly capitalist, can then demonstrate capitalism is evil, I can demonstrate how the text is evil, I’ve outsmarted the text, and I am morally superior to it."

That’s the keyword: outsmarted. Deconstruction is about outsmarting the text, not listening to it.

It's a one-way argument with an often-dead writer. Doing that for your own personal gain just feels...a little gross.

What if you considered a narrative as a whole composed of parts that can’t be broken down, prizing the end result over the smaller parts? Consider a narrative a soul instead of thinking about it like a body?

What if you read books and thought about them like friends and family? We don’t expect our friends to be perfect, and it’s okay for them to have imperfections and parts you don’t like. We love them even though they’re imperfect because perfection is not achievable. And learning to love them is about learning to dwell on their good qualities.

What if you started examining literature the way we examine music? You can look at the album as a whole, you can look at individual songs, but I think it’s pretty rare that we go so far as to break down each instrument on an album. The combination of things is what makes music work, right? And we don't expect each instrument to work as a whole on its own.

What if you used an optimist's approach? Go into a book assuming it’s going to be good, and really focus on the ways in which your assumptions are confirmed?

Get Derrida For Beginners by Jim Powell at Bookshop or Amazon

Get Enough About You: Notes Toward the New Autobiography by David Shields at Bookshop or Amazon