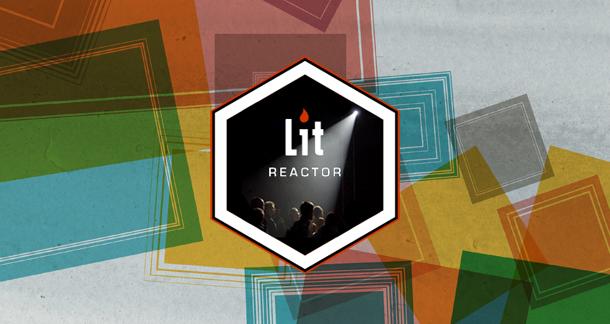 I apparently forgot to set my alarm, and I slept a few days past when I would normally wake from hibernation to write these spotlights. My bad. Winter always throws off my internal clock.

Normally, I would say something sassy and sarcastic about November, but I want to get to our community announcement, so please accept this sassy, sarcastic picture in place of the regular humor. As we get closer to the end of another awesome year at LitReactor, the staff has been keeping a pretty close eye on the forums and the suggestions you guys have left for us in the Community Feedback thread and other places. As always, I take the time to look at every comment I can find and try my best to sell the good ones up the chain. One in particular caught our attention as easy to implement, good for the site, and popular among the community members.

So I'm happy to announce that by the end of the month, we're going to be modifying the point system in our Writer's Workshop!

Kirk is working on exactly how we're modifying the system, but the end result is going to make it easier to get the points you need to submit something of your own. We expect that this will lead to more submissions, better and more consistent reviews, and an overall more satisfying community for active and relaxed writers alike. We'll announce the details here pretty soon, so thank you to the LitReactor community (you guys) for providing us with this awesome suggestion.

Book Club: After the People Lights Have Gone Off by Stephen Graham Jones

Have you checked out the LitReactor Book Club yet? Every month we start discussion on a new book, often by authors and publishers that have some affiliation with LitReactor. Discussion on After the People Lights Have Gone Off by Stephen Graham Jones has already begun, so if you've read it, chime in. If you didn't make it this time around, don't worry. We typically post each discussion thread a month in advance, so keep your eyes peeled for January's selection. Check it out! The Book Club is a great place to get to know our members and get involved in the community.

What is the most uncomfortable/difficult story that you have ever read to an audience?

I don't know about you, but I know many of us gravitated toward LitReactor because it's not easy to find people with our particular tastes in literature. Sure, we read Hemingway and King and can mix with the popular kids, but we also spend a lot of time under the hallway stairs in the back corner of the school, sharing books in secret because the teachers would definitely tell the principal if they heard us talking about that one scene. You know the scene. Not surprisingly, many of us are inspired to write disturbing, uncomfortable, and revealing scenes of our own, which can make things awkward when we're actually presenting that material to an audience. Do you have any experience with this? Join the discussion.

It is once again time for Storyville ideas.

Richard Thomas tends to pop up in my columns more than any other member, and that's probably because the man never sleeps. In addition to his own numerous projects, he spends a lot of time writing the Storyville series for LitReactor, which is seriously among the best resources any site has to offer on the craft of writing. I can tell you from experience, though, that coming up with column ideas isn't easy; writing something interesting and useful takes a lot of time and mental energy, and it's tough to get motivated unless you know there's an interest in the topic. Richard's always on the lookout for questions and topics to address. It's easy to suggest a topic, and a few words in this thread might be returned a hundred fold in Richard's next installment. Don't miss out.

"Tourists" by Angel Luis Colón gets the movie treatment

Angel makes a return to the Spotlight as yet another one of his short stories gets some positive attention. His short story "Tourists" is being filmed by his old college friend Rob Neilson, and based on some of the photos Angel posted on his blog, it looks pretty spectacular.

"But Nathan! I only watch movies if Robert Ebert tells me to, and since he's dead, I haven't seen a film in over a year. How do I know if I'll like this movie?"

Well, rather rude individual I just made up, you can check out Angel's story for FREE on Revolt Daily. It isn't for the faint of heart, but neither is almost anything written on LitReactor, so you should go read it. Right now. I promise I'll still be here when you get back.

Angel Luis Colón’s fiction has appeared in webzines such as Shotgun Honey, The Molotov Cocktail, Revolt Daily, and Out of the Gutter along with print journals like Thuglit, Dark Corners, and All Due Respect. He hails from the Bronx and works in NYC, but is exiled to the wastelands of New Jersey working on his first novel, Hell Chose Me.

Kicking Prose by Jay Slayton-Joslin is published by KUBOA press

Jay has been around the site since the earliest days, but this is his first time being featured in the Spotlight, and it's for some of the biggest news I can ever deliver about a writer. That's correct: Jay's first book has been published. It's called Kicking Prose, and it's a collection of his poetry. It's being published by KUBOA press and is available on Amazon.

Every now and then, we get questions from our community members whether or not we're cool with poetry. Let's clear this up now. Yes, we are very cool with poetry. Help us prove it by supporting Jay and his new book. We're looking forward to some great work from him.

Jay Slayton-Joslin is a writer from the London suburb of Beaconsfield, England. His work has appeared online and in print in journals such as Solarcide, Short, Fast and Deadly, Leodegraunce, Bizarro Central and Blink Ink. He has also appeared in the anthologies In Search Of A City: Los Angeles In 1,000 Words and Nova Parade. He is currently pursuing his undergraduate degree in American Literature and Creative Writing at the University of East Anglia. His first book, a poetry collection titled Kicking Prose is published by KUBOA Press. He can be found on his website, http://www.jayslaytonjoslinforever.com.

A Look Forward to December

Okay, yes, it's nearly the middle of December already. You don't have to remind me. But unlike other less devoted communities out there, LitReactor isn't slowing down in the slightest. In fact, as I peruse the list of upcoming columns, we still have some excellent stuff coming up, and our community seems to be more active than ever.

As I mentioned earlier, we'll be modifying the workshop before the end of the year to make earning points easier, so if you've been on the fence about signing up, now's the time to do it. As we approach the new year with some awesome new staff members, expect to see LitReactor grow stronger and more lively. As always, we're looking for your suggestions. Enjoy your holidays, and I'll see you next year.

That sounds fantastic, I was looking for some poetry.