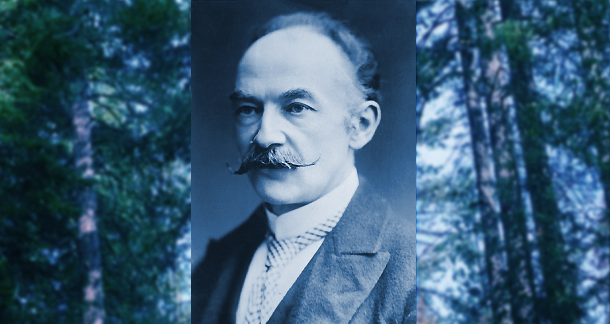 The short and lukewarm answer is that we should probably care, and not just because he had such an intimidating mustache.

I’ve done quite a few of these author birthday pieces for LitReactor over the years, from Regency romance godmother Georgette Heyer to Dashiell Hammett of hard-boiled detective fiction fame. I keep coming back to them because I never fail to learn something new about an author with a name that sounds familiar, but whose work I have only a passing knowledge of. Usually, what I think I know is wrong.

I pitched Thomas Hardy in particular because I wondered what The Mayor of Casterbridge says to the 21st century reader, or if Jude the Obscure or The Return of the Native are really anyone’s favorite novels in the year of our Lord 2022. Back in 2015, a semi-serious protest was staged at the Museum of Fine Arts in Boston that I still think about sometimes. It stemmed from an Instagram account called “Renoir sucks at painting,” which is still active, and which posits (as you can probably guess) that Pierre-Auguste Renoir was a pretty mediocre painter who benefitted from a really good public relations campaign that proliferated his work throughout galleries and museums. And there they remain, taking up good space for all of time. Its founder called Renoir’s trees evocative of “a collection of green squiggles." 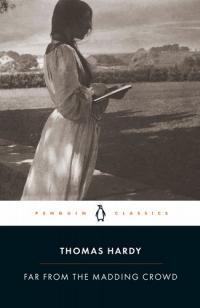 I don’t really have a strong opinion on Renoir either way and you’re probably not here to critique French Impressionism, but the point is still valid regardless of the medium, whether fine arts or literature. Why blindly accept a work as “classic” just because it’s labeled that way in a bookstore with a penguin on the cover? Maybe we could all do with churning over a few of “The Greats” once in a while who are not actually so great.
To be clear, I’ve not read Hardy’s works– that’s another reason why I was curious about him and his impact on modern readers. In my mind, he’s always fallen into the class of white, male authors from the nineteenth century who always seem to be pegged as Literature with a capital ‘L,’ even if he was writing about the hypocrisy of late Victorian attitudes towards women. But pretty quickly it became clear that my assumptions regarding some illustrious background were in error. According to the Thomas Hardy Society, he was born in a thatched cottage near Dorchester. His father was a builder and a passionate musician, who deeply influenced his work. As the New Yorker put it, “The Hardys were the kind of people that Jane Austen would never have allowed into her parlor.”

Tess of the D’Urbervilles (1891) and Jude the Obscure (1895) were both lambasted by negative reviews when initially published, with the Church of England's newspaper calling Jude “a shameful nightmare, which one only wishes to forget as quickly and as completely as possible.” Hardy’s ascent into literary fame was actually an upward trajectory that was by no means a given. But all of that was over a century ago. To answer my question of whether Hardy’s work still resonates with the modern casual reader, I glanced over a scattering of Amazon comment sections, Goodreads and even Reddit to see what readers had to say. Some called his novels bleak and disheartening. One user noted that they admired Hardy more than they enjoyed him and a frustrated Goodreads reviewer of Tess of the D’Urbervilles addressed the character of Tess directly, accusing her of being ignorant beyond believability. Another reviewer argued that despite the age of the novel, they’ve successfully used the premise of the book to advocate for better sex education in the 21st century.

For my own part, I’ve picked Far From the Madding Crowd as a summer read. So far, my main initial impression is that Hardy likes his sentences long. Some of the language is beautiful. At other times, it makes me feel like I'm having a minor stroke, but the people of Amazon imply that this may not be the writing so much as the miniscule typeface of the edition I’ve chosen (again with a small aquatic bird on the cover).

Generally speaking, Hardy does seem to have retained his readership over the years due in large part to universal themes and keenly drawn characters. Obviously, there will always be divergence over what should be a classic. Not all literature should be carried forward into the future on a gilded pedestal. There was, however, one comment I saw repeated frequently as I scrolled through reviews: readers kept thinking about Hardy’s work long after they put it down, even when they didn’t want to. So pour one out on the second day of June for Thomas Hardy, a Renoir in his own right who is still taking up space in the minds of reluctant readers after many decades.

Get Far From the Madding Crowd at Bookshop or Amazon

Get Tess of the D'Ubervilles at Bookshop or Amazon

nice article good to see here. UPSers is an online US Portal used by UPS Employees. It deals with package delivery and supply chain management for more see upsers login

Of course, everyone should care about Thomas Hardy. He was born on June 2nd, 1840. He is most well known as the author of Far From The Madding Crowd, The Mayor of Casterbridge, and Tess of the D’Urbervilles. All three of these works of literature were turned into films in the late 60’s. The films won a total of five Academy Awards. The Mayor of Casterbridge was turned into a mini-series in 1985 and it won 2 Emmy Awards. All three films and the mini-series were directed by David Jones. Source cheap essay writing service usa

This is precisely why it's so successful, because it sucks you in with just the right amount of difficulty and makes you want to keep trying it one more time. Flappy Bird currently dominating the mobile gaming market is now available on PC.