In Honor Of Back To School, Let’s Talk About Romeo And Juliet’s Idiocy 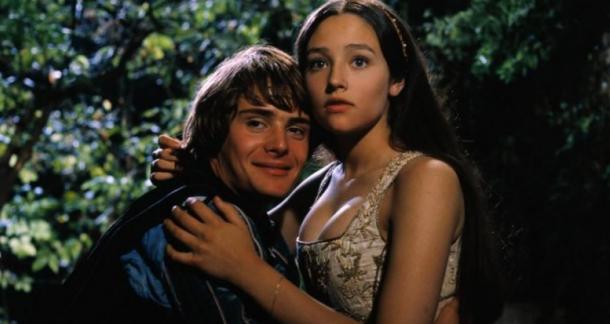 Junior highs and high schools across America go back into session in August, and that means millions of teens will get their first taste of Shakespeare’s Romeo and Juliet, the story of "star-crossed lovers" from two warring families who would rather die than be apart. If students these days are anything like kids back in my day, some members of this new class will likely think it’s really romantic that Romeo and Juliet commit suicide, and some of their teachers might very well echo this sentiment. The students might watch the 1960s cinematic adaptation of the play, directed by Franco Zeffirelli, or possibly even the Baz Luhrman extravaganza from the '90s, starring Leonardo DiCaprio and Claire Danes, two films that lean into the "tragic love story" angle of the narrative.

The elder Montagues and Capulets are as much the tragic figures in this narrative as their children.

But the fact is, R+J are a couple of morons. Mind you, it's not their fault they're morons: they're the product of their moronic families and the larger, moronic society that spurs and encourages family feuding. Furthermore, their idiocy is rooted in angsty teen histrionics, or the idea that every single person is a bit of a moron when they're young. Their love-induced double suicide might be sad and heartbreaking, but it certainly isn't romantic. We should weep not for the fact their love was so strong they chose death over separation, but rather, for the fact they believed in such an idea to begin with.

Ask yourself: how much did you really know about the world and even yourself when you were around thirteen to fifteen years of age (Juliet is most definitely thirteen in the play, and Romeo, while his age isn't ever specifically noted, must be around the same age, if not a few years older at most). Personally, at that age I thought I had everything figured out, and all the adults around me were sheep who just didn't really understand the world and the plight of youth. Looking back, I might've been right about certain adults (particularly the faculty at my high school), but I definitely hadn't figured everything out, not by a long shot. I was an idiot. And no, this isn't self-deprecation, because, as I stated above, everyone is an idiot when they're that young. People newly arrived at teenage-hood do stupid things. It's simply a fact of life.

Let's start with Romeo. Here's how his father, the elder Montague, describes the boy:

Many a morning hath he there been seen,

Adding to clouds more clouds with his deep sighs;

But all so soon as the all-cheering sun

Should in the farthest East begin to draw

The shady curtains from Aurora’s bed,

Away from light steals home my heavy son

And private in his chamber pens himself,

And makes himself an artificial night.

Black and portentous must this humour prove

Unless good counsel may the cause remove.

Basically, Montague's saying his son routinely shuns the daylight and drowns in his own sorrow. In other words, he's a teenage Goth. And there's nothing wrong with that, of course, but after most Goths grow up, while they still might stay out of the sunshine, they do feel a twinge of embarrassment at all the despair-wallowing they used to do.

We also learn that Romeo is in love with a woman named Rosaline, who does not reciprocate his passions. As a remedy to his suffering, cousin and bud Benvolio suggests Romeo simply fall in love with someone else. This he does, when he sees Juliet later that evening at a party. "See" being the operative word here, not "meet." His love does not spur from a conversation with the girl (nor months of dating and bonding, like most grownups do before the concept of love even enters their brain), but rather upon the mere sight of her. He states:

Did my heart love till now? forswear it, sight!

For I ne'er saw true beauty till this night.

For Juliet's part, after a brief flirtation with Romeo, she declares that if the boy is already married, her only wedding bed will be her grave, i.e., she'll simply die if she can't be with him (which, of course, ends up being the case—Nice foreshadowing, Shakes!). When both teens find out their "true loves" are members of the opposing family, they go hard into woe-is-me mode, but the illicitness of their love only drives them further together.

But let's be clear: these two don't actually love each other, they just love the idea of being in love, especially if such love is torturous and complicated. Because again, they're teenagers, and "extra" is a teenager's default state. How many kids date someone "from the wrong side of the tracks" because pissing off their parents is more exciting than dating an "approved" or "acceptable" peer?

Let's not forget, however, that however stereotypical or moronic these two behave, their elders are far more moronic. Again, they can't help being extra, but their idiot parents can make a choice, and they choose to keep feeding into this ridiculous, ancient feud—which neither can really remember the start of, by the way. The violence and heartbreak that ensues is a direct result of this stupidity, and this is the essential tragedy of the narrative: not Romeo and Juliet's double suicide in and of itself, but the fact their parents more or less push them toward their fates. The elder Montagues and Capulets are as much the tragic figures in this narrative as their children, their hamartia being this blind adherence to rivalry for the sake of rivalry. Romeo and Juliet's deaths are pointless and wholly avoidable, if their parents had only set their stubborn opposition aside.

So students, teachers, and parents alike, remember: Romeo and Juliet isn't a romantic play. It's sad and heartbreaking, yes, but it shouldn't form the basis of one's definition of love.

After years of teaching Shakespeare and also years of performing Shakespeare I can recite the prose in my sleep.
What bothers me is not that the Bard is often misunderstood by the general public that rarely gets the heightened language of the 'works' but that many scholars misunderstand his intent.

The popular belief now among academia is that Romeo and Juliet didn't really love one another. Not true at all, when all considered.
They try to out do one another in language, but the story is about teenage love we all know - powerful, strong, dramatic, convincing to every teenaged soul WHILE it is happening.

I'm sure had they survived, somewhere in their 30's, they would look back thinking: "What the hey was I thinking back then!?"

However, at the moment, on that balcony, every glance, every kiss, every touch holds a true meaning.

Shakespeare may have mocked his characters in Falstaff and a few others, but he believed in love. That my dear you can not take away from him and no other play in the world ever has conveyed love as strongly

This is Shakespeare's immortal love story. I recently read reviews of contemporary authors and realized that this story has a hidden meaning. I am sure that many copywriters use the original text of this play. These are games with the law and I always check with this service https://au.edubirdie.com/plagiarism-checker for plagiarism. This is a good experience for students who download essays. Shakespeare cannot sell copyright because he died.

Salmon, sardines, mackerel and certain other fatty fish are rich in omega-3 fatty acids, which are thought to lower the risk of heart disease and stroke. The benefits of eating fish may far outweigh the risk of harming your health from the mercury these fish contain, according to Harvard's T.H. Chan School of Public Health. If you worry about the contaminants your fish dinner may contain, you can try eating lower down on the food chain. Certain fish, such as sharks, swordfish, king mackerel and tilefish, contain higher levels of mercury than smaller fish, like sardines, smelt, and anchovy.
Pomegranate
https://www.iorganifireviews.com/

Salmon, sardines, mackerel and certain other fatty fish are rich in omega-3 fatty acids, which are thought to lower the risk of heart disease and stroke. The benefits of eating fish may far outweigh the risk of harming your health from the mercury these fish contain, according to Harvard's T.H. Chan School of Public Health. If you worry about the contaminants your fish dinner may contain, you can try eating lower down on the food chain. Certain fish, such as sharks, swordfish, king mackerel and tilefish, contain higher levels of mercury than smaller fish, like sardines, smelt, and anchovy.
Pomegranate
https://www.iorganifireviews.com/

One could just as easily include green tea, coffee, dark chocolate, yogurt, and olives to the superfood list for a variety of reasons mentioned above.
Criticism of the nomenclature

As healthful as superfoods might be, the use of the term is largely a marketing tool. Scientists do not use the term. For example, a search for "superfood" on PubMed, the repository of most peer-reviewed biomedical journal articles, yields fewer than a dozen results. And several of these studies actually warn of dangers of superfoods, such as arsenic and pesticide residue in imported foods. [Infographic: Pesticides Lurk in Fruits & Veggies]