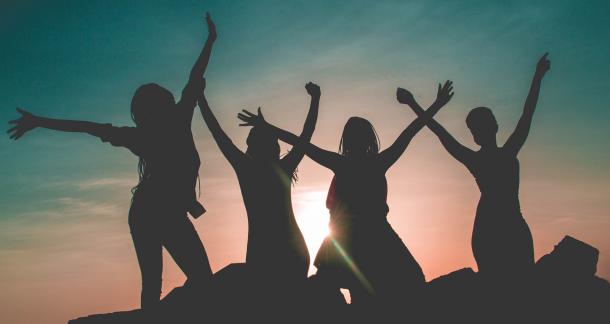 There’s something about knowing you’re not alone on the journey that makes it a million times easier.

By journey, I mean life in the grander scheme, but also publishing, book-loving-and-writing, blogging...that journey as well.

For a long time after graduating undergrad, I felt alone in my writing. I had writer friends, but they were journalist writer friends. I had left all my novelists behind when I donned my cap and gown to receive my diploma, and it was hard to find them again.

Ultimately, it was the internet that saved me and my friendships with other writers of books. I found the most incredible writers via Facebook, then Twitter; I found fellow book lovers on Instagram, YouTube, and via their blogs; I found a whole community of people just as wrapped up in this weird, wacky, wonderful world as I am.

I met a lot of really amazing writers and bookish people, people whom I now cherish and know I can text or DM on Twitter and say “hey, I have a question about my book,” or, “Do you wanna get brunch?”

But they stayed online. Even though I lived in New York (or maybe because I lived in New York! Making friends is hard here!) I rarely got the chance to meet up with people in-person. I’d have scattered friendships, but what I really wanted was a writing group. One that I could meet up with at a coffee shop, one with whom I could celebrate the highs and mourn the constant rejections, one with whom I could sit in silence writing for hours only to suddenly turn and say, “But omg what if I made this a dual POV!” and get a reasonable, excited response to go along with my excited, mildly unreasonable interruption.

This summer, I finally got that. I’ve previously written about my online writing groups, and about the importance of finding your writing “people,” even if it’s virtual. And as much as those online friendships remained (and remain) important to me, I found myself wishing for a group to meet in-person.

So what did I do?

Well, I did what I’ve always done when looking for more writing friends: I turned to the internet. A critique partner of mine and I put out a call on Twitter asking for friends in the city to join our writing group, and, to my utter shock and delight: people responded!

The thing about the writing group is, it turned out nothing like I planned. I mean, looking at it from a point of view of whether or not things went according to my calculations, you would think it was an utter disaster. I had this whole four-week rotation mapped out, where we’d write for two weeks, workshop one week, and have a party the fourth, and...that just didn’t pan out.

People’s schedules were too unpredictable, summers in New York are filled with people taking off for neighboring states every other day it seems, and then there was school and work and house parties and —

Basically, we were busy.

What did work out, though, is that I met a lot of really amazing writers and bookish people, people whom I now cherish and know I can text or DM on Twitter and say “hey, I have a question about my book,” or, “Do you wanna get brunch?”

People with whom I’ve celebrated announcements, articles going viral, and other writerly touchstones.

People I’ve gotten to go to book events with (so that, for once, I wasn’t sitting alone in a corner, that One Rando with No Friends).

People who’ve become a part of my life in a way I wouldn’t trade for anything in the world.

I know this is possible for me in part because I live in New York, a city where it’s easy to find other writers and readers and book launches and cafes to write in. I tried finding a writer’s group back in South Carolina, where I lived before this, and it was much more difficult. So if you live somewhere that finding a writers’ group is hard: I feel that. I really do!

Despite that, I still want to encourage everyone to try. Join NaNoWriMo and see if you have a municipal liaison hosting events this month. (And then poach your favorite people for your own events the rest of the year!) If you’re a member of a writing organization, like SCBWI or RWA, reach out through those and see what’s available. Go to a local bookstore for an event and just strike up a conversation with another solitary person. Or do what I did: go on Twitter and blast the heck out of your request for writer friends.

I promise you, it’s worth it in the end.