By now you have no doubt seen and reveled in the irrefutably awesome Guardians of the Galaxy trailer. If not, go watch it now. I’ll wait.

There, don’t you feel better? Despite being virtually unknown outside of comics, and even barely known within them, the Guardians of the Galaxy movie seems destined for box office success, if only because for the next five months it will be referred to as the movie where Bradley Cooper plays a raccoon and Vin Diesel is a tree, and that's a premise that was made for the internet. But if you are one of the many who were introduced to this motley crew of interstellar misfits for the first time and wish to know more, I have assembled a short list of essential reads for the starter.

If you really want to start at the beginning, this is your destination. Annihilus, a bug-faced warlord from the dimension next door, decides to invade the Marvel Universe, bringing with him a force that is not described as an army so much as a wave. The Nova Corps (Marvel’s version of the Green Lanterns) are wiped out in under an hour and pretty soon every major power in the universe has to watch their worlds burn as the Annihilation War rages across the stars. Although the Guardians do not appear as a team in this series, many of its future members are drawn into and shaped by this conflict. Peter Quill, the Star-Lord, is instrumental in rallying the broken remnants of many intergalactic militias into an effective resistance, and Drax wanders in and out of various battlefields as he pursues the object of his vengeance and we learn just why he destroys. This book is also a great intro to the wider Marvel Universe, in case you’ve ever wondered what all those aliens are doing when they’re not trying to conquer Earth.

In the aftermath of the biggest war the universe has ever seen, the Phalanx decide to start a new one. This race of relentlessly malevolent robots seeks to assimilate what is left of the once mighty Kree Empire while it is too weak to fight back. If they succeed, they will have an intractable foothold in our galaxy, and threaten all organic life. Trapped behind enemy lines, it’s up to Star-Lord, Rocket Raccoon, Groot, and a few other rogues in the right place at the wrong time to save a civilization from a fate worse than extinction. After narrowly avoiding two universe-ending apocalypses in a row, Peter Quill decides they need a team to prevent these kinds of things, and the Guardians of the Galaxy are born. 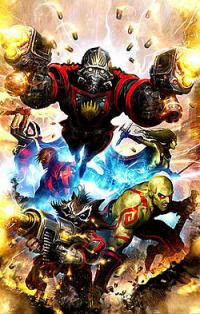 The Guardians set up shop in Knowhere, a science station built in the hollowed out head of a dead space god. From there, they keep themselves busy guarding the galaxy from all manner of threats. All of the recent stellar warfare has degraded the fabric of spacetime, and it's tearing open in places. Whilst trying to patch the holes, the Guardians also fight an intergalactic cult, stop a jailbreak in space, and do their damnedest to prevent yet another war that a visitor from the future has prophesied. It looks like this book is a large influence for the film, as Dan Abnett takes what were a bunch of D-list cosmic heroes and villains and turns them into a truly unique team built with interesting relationships and great dialogue. This book is sci-fi action comedy at its best.

Drax had finally got his revenge. Thanos the Mad Titan, murderer of a billion stars, was finally dead, and everybody agreed the universe was a better place. So who the hell brought him back to life? And WHY? Do you have any idea how hard it was to kill him the first time? No one seems more upset at his sudden resurrection than Thanos, who immediately begins to destroy, well, everything. The Guardians must keep the chaos contained while they work to discover for what horrible purpose he could have been brought back. And when they do… let’s just say God made everything with a purpose, even the truly wicked for an evil day.

The undisputed stars of the trailer, Rocket and Groot, finally get their own miniseries, which explores the heartwarming friendship between a gun-toting raccoon and a talking tree. After the heroic demise of many of the Guardians, the team disbands. Rocket takes a boring mailroom job to pay the bills, until a sliver of sentient wood gives him hope that his friend might still be alive. As he goes in search of Groot, we get to learn the comically confusing origin stories of two of Marvel’s most bizarre characters, before the dream-team is finally reunited for one last surreal adventure.

Read those, and you should be ready for anything the movie can throw at you. There is a current Guardians of the Galaxy series ongoing, and although I’ve only read the first few issues, it looks promising as well. One thing you’ll notice is all the characters from the trailer that you will suddenly recognize. The other thing you’ll notice is how many amazing characters and places they leave out, and you’ll start getting even more excited at the limitless possibilities.

"The undisputed stars of the trailer, Rocket and Groot"...what? Hah, not likely - 80% of it was on Star Lord and randomly distributed between the "heroes" and the prison guards. Your bias is showing Mr. Shepard.

docawesome from Dallas is reading Texas by James Michener February 25, 2014 - 9:46am

Based purely on the number of gifs, stills and fanart blowing up all over Tumblr and Twitter, it totally looks like Rocket and Groot are the stars of the movie. But perhaps it would have been more accurate to call them the favorites.

Dwayne from Cincinnati, Ohio (suburbs) is reading books that rotate to often to keep this updated February 25, 2014 - 11:43am

When I first heard this I was thinking the older set in the future GotG, still disappointed.

I could be wrong because it's been a while since I read it but.... wasn't it actualy NOVA (Richard Rider) who puts the Guardians of the Galaxy together?  Or comes up with the idea and hands it over to Starlord?   I just remember Nova being a part of it at first and then sadling Peter Quill with the making it work.

docawesome from Dallas is reading Texas by James Michener February 27, 2014 - 1:27am

Star-Lord actually did reach the conclusion that such a group was neccessary, but Nova had the same one and had already gathered up a list of potential recruits for him. Nova had to convince Peter Quill that he was suited to lead, but actually getting the team together was all Quill.