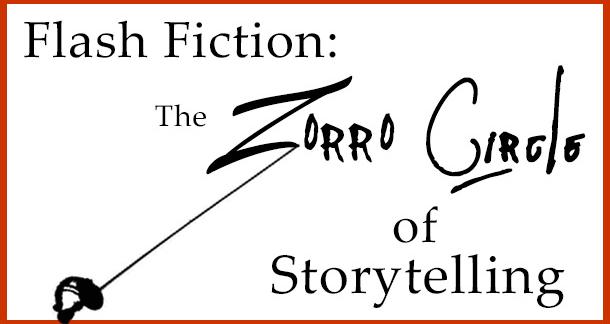 Good flash fiction can be as profound and evocative as longer pieces in the same way a poem can use its brief time with readers to create astounding effects. I recommend that all writers spend some time both reading and writing flash. In the same way that the simplicity of the Zorro circle forces Antonio Banderas to master the core concepts of swordplay, writing flash fiction can teach writers where the real power of a story comes from.

What Is Flash Fiction?

Since there's some confusion on what flash fiction is, let me give my simple working definition: Flash fiction is any piece of prose writing that tells a story in 750 words or fewer.

For a story to count as a story, it must include a character, setting, and action. If the story is over 750 words but under 1500, it's considered a "short short story." Who likes short shorts? We do.

The Heart of the Story

When I'm struggling to figure out where a story is getting (or losing) its power, I use an exercise that gradually transforms my piece into flash fiction. I do this for my own work or for pieces I'm dissecting, and it's an exercise I often recommend to fellow writers struggling with the same thing. It goes like this:

The end result may or may not be a quality piece, but the process helps identify the crucial plot, character, and thematic elements that make the story what it is. Beyond transforming work into flash fiction, simply working with short-short-short pieces forces you to repeatedly identify the essence of a story. The heartbeat of a story can stem from a character's defining action, a central story concept, an epiphany, a full plot arc, or any number of other mechanisms, but working with flash fiction familiarizes authors with the emotional journey that allows all of these storytelling mechanisms to function.

The Significance of a Sentence

Working with flash fiction forces a writer to practice killing their darlings.

Learning what makes a story powerful is a vital element in improving one's capabilities at the global level. Knowing what details bring you there helps you understand the macro level of a writer's task. However, much of the benefit of writing flash fiction comes from the practice it gives at the micro level. Strunk tells us to "omit needless words" and Orwell states, "If it is possible to cut a word out, always cut it out"—but writing flash fiction takes this a step further. Rather than prompting you to question the value of each word, it forces you to do so.

Especially when given a strict word-count limit, working with flash fiction forces a writer to practice killing their darlings. Each sentence must be re-integrated with the point of the flash piece, and every word has to count if you want the final product to be worthwhile.

The Power of the Unsaid

The legend goes that, when challenged to write the shortest story he possibly could, Ernest Hemingway came up with the following six-word piece:

Whether or not Hemingway was indeed the author of this piece, it's certainly true that many readers experience an emotional journey in just eight syllables. In trying to mimic that impressive effect, I separated out the last line of one of my poems:

She hung herself with silk.

Obviously, Hemingway did it better—but the exercise is nevertheless useful in seeing how quickly people can be impacted by a combination of contradictory details. The power of these stories comes, not from what they say, but from what they don't say. Especially in the world of speculative fiction, amateur writers often fall into the trap of jabbing their reader in the eye with every piece of significant information.

Since it's impossible to say everything directly in the confines of a flash piece, writers have to learn how to let a smaller action signify an unspoken background or emotion. In Rod Kessler's "How to Touch a Bleeding Dog," a wounded animal becomes the vehicle for telling a story of love, loss, and loneliness. In the six-word story allegedly told by Hemingway, shoes become a way to show heartbreak.

In my interview with poet Jamaal May, I was given the language to describe why the unsaid becomes so powerful. Jamaal describes it as "poetic torque"; by allowing what's actually being discussed to move against the unsaid reality, you create a sense of movement for your reader. As they take the journey from the expressed to the unexpressed, they move across an emotional landscape that would be almost impossible to guide them through directly. They are able to obtain a primary emotional experience for themselves by moving between what you said and what you meant.

Some Flash Fiction Projects I Enjoy

Ready to jump in? Fantastic. Transforming your current work into flash or picking up some prompts for the medium can be useful. That said, being involved with a community of fellow writers can help motivate you. So, first, remember to play around with flash here at LitReactor; if you aren't already signed up, we'd be thrilled to have you. Second, consider some of the following projects elsewhere on the web:

If you know of any flash fiction projects worth checking out, I'd love to hear about them in the comments, below.

Every Day Flash fiction is a great place to read and submit flash. They give helpful critiques to the stories they reject, and have a good community going.

Obviously, article rewriter did it better—but the exercise is nevertheless useful in seeing how quickly people can be impacted by a combination of contradictory details. The power of these stories comes, not from what they say, but from what they don't say. Especially in the world of speculative fiction, amateur writers often fall into the trap of jabbing their reader in the eye with every piece of significant information.