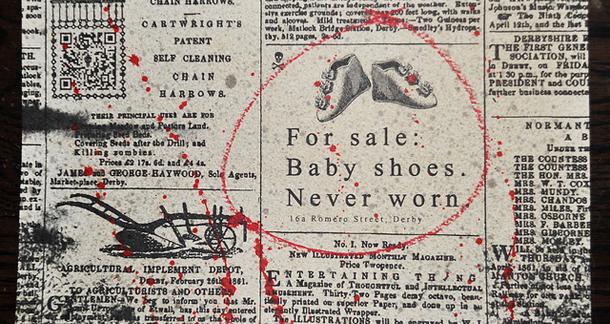 Most of you are probably familiar with it: "For Sale, Baby Shoes, Never Worn." One sentence, six words, and a possibly heart-wrenching backstory looming behind them-- a backstory left to the reader's imagination. It reads like a classified ad, but it packs a wallop.

Considered a hallmark of flash or micro-fiction, "For Sale..." has long been attributed to Ernest Hemingway. Legend has it, while gathered with friends the author boasted he could write a complete story in six words or less. Everyone at the table laid their money down, and Hemingway proceeded to jot out the famous sentence. People often point to this anecdote as an example of Hemingway's literary prowess, given that he could pop out such a meaty tale on the spot, and do so without an ounce of fat weighing the narrative down.

Now, though, it looks like the anecdote only proves Hemingway knew how to cheat his friends out of some money. Garson O'Toole, aka the Quote Investigator, or QI, performed exhaustive research on "For Sale..." Here's what he found:

...the earliest published evidence known to QI connecting him to this tale appeared in 1991. The author Peter Miller included a version of the anecdote in his book “Get Published! Get Produced!: A Literary Agent’s Tips on How to Sell Your Writing”. Miller stated that he was told the tale by a “well-established newspaper syndicator” circa 1974.

So, the attribution of the quote is not a direct source. It's an anecdote of an anecdote.

Moreover, QI found numerous appearances of "For Sale..." in various incarnations predating Hemingway's supposed creation. The earliest came in 1906, and was in fact an actual classified ad. William R. Kane published the sentence "Little Shoes, Never Worn" in a 1917 issue of "The Editor," a publication for writers. This is the first known instance of the sentence appearing as fiction. Check out QI's full findings here. It's pretty fascinating.

So, while it is possible the anecdote told by the "well-established newspaper syndicator" actually happened, it looks doubtful Hemingway came up with the tale himself. Perhaps he'd heard it or read it somewhere and forgot, leading him to draft the sentence as an original. Maybe he rigged the bet and had a good laugh about it. Maybe the event never happened at all.

What does everyone think? Earth shattering? Doesn't really matter, it's still a neat sentence? Sound off in the comments below.

It's not a narrative. The wallop does not exist; it suggests that there might conceivably be a wallop elsewhere. I'm more concerned that people think it's clever than with who wrote it.

But yeah, it's always nice to hear that history is rife with errors.

Did the line make the man or did the man make the line?

Either way ill be Twashing Hemmy on Twatter momentarily.

Hetch Litman from Somewhere in the mountains of the Pacific Northwest is reading The Violent Bear it Away by Flannery O'Connor January 31, 2013 - 11:48pm

"Looks doubtful." That is what you are going with? Come on

Sorry to say this, but I don't really care who wrote it. The thing that I like most about that sentence is that it illustrates the importance of the reader in making meaning. You can read it as: a parent selling a pair of shoes their child never wore, because he or she outgrew them before they could use them. Or the more common interpretation: A parent is selling a pair of shoes that were never used, because the child died either in utero or just after birth. It speaks more about the character of the reader than it does to the quality of writing itself. This might be blasphemy in the church of writing, but I can't help it haha. As an English teacher, I am always more interested in the various interpretations people (usually my students) come up with.