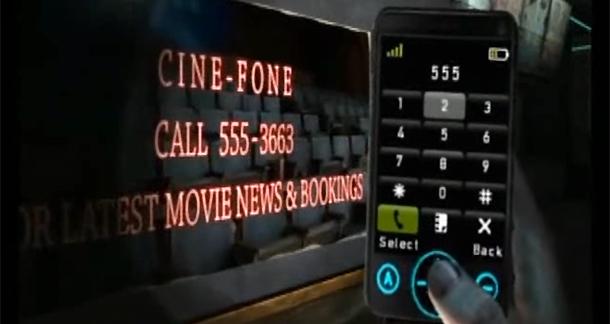 This is the third column in our ‘Silent Hill on LitReactor’ series. If you missed the first two instalments then click through to read about The Real Town Behind Silent Hill and The Literary References in Silent Hill. Today is all about film and television references, of which there are many. This is not an exhaustive list but there are likely a lot of things you haven’t previously noticed or considered

For starters, the way in which the monsters move—those twitching movements and violent jerks are lifted straight out of Jacob’s Ladder.  Then there’s the way in which the action shifts from one reality or world to the next, making it difficult to discern what is and is not real. Indeed the entire aesthetic of Silent Hill has been influenced by Jacob’s Ladder. There are so many commonalities—from chainlink fences to spinning wheels to the subway to the hospital to the nurses to the demonic Valtiel in Silent Hill 3. If you check out the texture files for the original Silent Hill, there’s even the same anti-drug poster. You know, the one that starts with “Hell”. 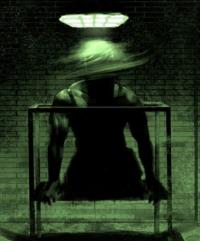 You’d think that would be more than enough references for one game, but believe me, we’ve got a while to go yet. There’s the key to Lyne House in Silent Hill 2 (as in Adrian Lyne, the director of Jacob’s Ladder), and don’t forget the protagonist is James Sutherland (same initials as Jacob Singer), and if you think that’s just a coincidence look at James’s jacket and Jacob’s jacket … more than just a passing resemblance. In Silent Hill’s hospital James is wheeled through a hall on a gurney. In Jacob’s Ladder Jacob is strapped to a gurney and wheeled through a hall. Not familiar with the scene? Oh, just Google something along the lines of “Jacob’s Ladder scene that inspired Silent Hill” and you’ll land upon it. Note, too, the number of wheelchairs and bicycle wheels in both. And that thing in the box in Jacob’s Ladder? There have been several nods throughout Silent Hill, from the corpses in Pyramid Head’s lair to the Mary final boss fight in Silent Hill 2 to the Ideal Father monster James encounters earlier on in the game. If we fast-forward to Silent Hill Homecoming, the game follows a soldier returning from war to his hometown, just as Jacob’s Ladder focuses on a Vietnam veteran.

But I’ve saved my favourite reference for last, and we’re about to get into spoiler territory, so if you don’t want the ending of Jacob’s Ladder spoiled then skip to the next section. If you get the bad ending in Silent Hill, it turns out everything was in Harry’s head as he lay dying after crashing his Jeep. And in Jacob’s Ladder, it turns out it was all in Jacob’s head as he lay dying in a triage tent in Vietnam.

Oh, and as a final note, Jacob’s Ladder was inspired by the film An Occurrence at Owl Creek Bridge based on the short story by Ambrose Bierce. So there’s an indirect literary reference that wasn’t covered in the literary references instalment.

Fans of Argento are in luck, because there are references to the world’s most famous giallo director galore. In the Silent Hill town centre you’ll find Kazanian Jewelry, a reference to Kazanian Antiques in Inferno. Then there’s the Metropol Theater in Old Silent Hill, a reference to the Metropol Theater in the Lamberto Bava-directed Dario Argento-produced Demons. But in case the theater name is a little too obscure for gamers, Silent Hill doubled down with Demons posters plastered down the side of the theater. Silent Hill: Downpour producer Devin Shatsky listed Suspiria as an influence in a 2011 interview and Silent Hill composer Akira Yamaoka lists it as his favourite film, comparing his own style to that of Goblin (who, of course, composed the original Suspiria soundtrack).

Then there’s the naming. Dahlia Gillespie was originally Daria after Daria Nicolodi, Argento’s ex-wife. The change to Dahlia was a nod to James Ellroy’s The Black Dahlia. Similarly, Alessa was originally Asia after Argento’s daughter.

So now we’re getting into weird territory, but Arnie’s early nineties action-comedy Kindergarten Cop is referenced multiple times in Silent Hill. In the literary references instalment I mentioned that the Midwich Elementary School was identical to the school in Kindergarten Cop, but it doesn’t end there. See there are posters that are identical to those displayed in the movie, such as the white dog poster, then there’s the similarities in terms of the reception area, the first aid locker, and even the number seven school bus in Silent Hill. No prizes for guessing the number of the Kindergarten Cop bus. I guess when Team Silent aren’t watching horror films they’re kicking back with nineties Arnie classics. Perhaps next instalment we’ll get some nods to Jingle All The Way, Terminator 2, and Total Recall.

Silent Hill fans looking for a television series that has some of that small-town eeriness and atmosphere that Silent Hill is famous for are rarely disappointed with Twin Peaks. Silent Hill producer, Akihiro Imamura, notes David Lynch as a huge influence, particularly on the second Silent Hill instalment, and lists Twin Peaks as a personal favourite. Eraserhead, Lost Highway, and Dune are also listed as influences. But it is Blue Velvet that is far and away the most overtly referenced Lynch film in the second game. There’s the shooting from the closet—down to the type of closet and camera angle—and the part where the protagonist catches Pyramid Head molesting—or arguably fighting—two mannequins, referencing the scene in which antagonist Frank beats and rapes Dorothy whilst Jeffrey watches from the closet. Then there are the similarities between Maria—who dyes her hair, develops a romantic interest in James, radically changes personality within the game, and works as a performer at a bar—and Dorothy—who wears a wig, develops a romantic interest in Jeffrey, radically changes personality within the film, and works as a performer at a bar. Note, too, the similarities in stage layout and curtains in the Heaven’s Night and Blue Velvet bars. Even when it comes to defence methods, both Maria and Dorothy opt to wield a big-ass kitchen knife. And then there’s the apartments themselves, perhaps more of a stretch, but there’s a similarity between Blue Creek Apartments in Silent Hill 2 and Deep River Apartments in Blue Velvet.

In Andrei Tarkovsky’s Solaris, the protagonist experiences hallucinations based on his deepest thoughts and must confront memories of his deceased wife. There’s no official confirmation that Solaris influenced Silent Hill, but it bears an uncanny resemblance to James Sutherland’s plight in Silent Hill 2. Similarly, in Dino Risi’s Fantasma d’amore (Ghost of Love), protagonist Nino has a chance encounter with a former lover and ghost of the past, Anna, and he winds up chasing ‘ghosts’ through foggy streets for much of the film. If that’s not Silent Hill enough for you, then towards the end of the film Anna’s hair is similar to that of James’s wife Mary. It may be a stretch, but knowing the lengths the creators of Silent Hill have gone to for the sake of throwing a reference in, well, maybe it isn’t …

On a door in the original Silent Hill, ‘help me’ is scrawled in much the same style as those same words were scarred across Regans’ stomach. There are also a couple of nods to The Exorcist 3. Note how Lisa Garland wears the same nurse’s uniform as the nurse. And in the hospital you may note ‘what a wonderful world' on the wall just before Heather passes by Valtiel. Those who know The Exorcist 3 will remember “It’s A Wonderful Life” scrawled on the wall in a victim’s blood (what else you gonna write with?). 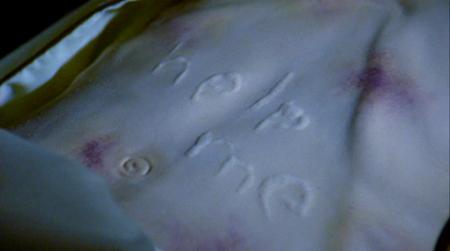