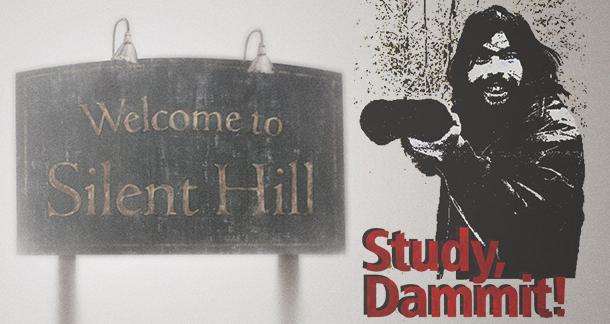 Last month I wrote about the real town behind Silent Hill. This month we focus on the literary references, and believe me, the town and game are full of them. I knew going in there were a number of film, literary, and pop culture nods, but only in diving deeper down the rabbit hole have I discovered just how many. I could have written an article just as long on film references alone (highlights include David Lynch, Dario Argento, David Cronenberg, and Stanley Kubrick), but this is a literature site, so let's get to it.

Perhaps the most obvious and frequently recurring influence is Stephen King. For starters, there are a number of streets and roads referencing various literary greats—including Bachman Road, an illusion to King’s pseudonym, Richard Bachman, under which he penned titles such as Thinner, The Long Walk, and The Running Man.  In the original Silent Hill, before saving your progress via a notebook and pen, text appears that reads: “Someday, someone may experience these bizarre events. Hopefully, they will find my notes useful.” This references a line from King’s The Mist: “I am going to leave these pages on the counter and perhaps someday someone will find them and read them.”

But that’s not the only or most obvious text lifted from King. A garage door has ‘Redrum’ scrawled across it in blood, and posters of Carrie and Pet Sematary show up in town. If that’s not enough, Stephen King himself is displayed on a poster that reads ‘Study Dammit’. Now, you can’t quite tell it’s King in all his pixelated glory unless you’re familiar with the original taken from The Maine Campus student newspaper in 1970, but it’s there in the original Silent Hill inside the Café 5to2 (which, fun fact, is named after the café in Natural Born Killers). 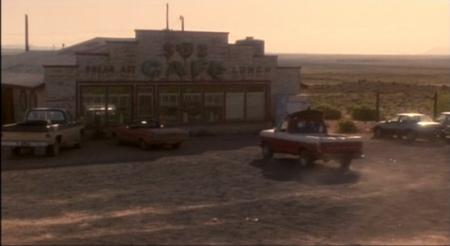 Whilst Stephen King is an obvious literary influence for a horror video game, William Shakespeare isn’t (though there are moments of horror in plays like Titus Andronicus and Hamlet). Yet in Silent Hill there are various references and allusions to Shakespeare. To kick things off there’s an entire ‘Shakespeare puzzle’ in Silent Hill 3, which you’ll find in the shopping centre. The initial note reads ‘Fair is foul and foul is fair’, a quote taken from the three witches scene in Macbeth. In normal mode you just have to arrange the books out of numerical order, but in hard mode each book corresponds to a Shakespeare play—Romeo and Juliet, King Lear, Macbeth, Hamlet, and Othello—and the difficulty of the puzzle is upped considerably.

Apparently, the creators of Silent Hill were really into their Shakespeare puzzles. In Silent Hill: Shattered Memories, ‘Twelfth Night’ is referenced and claimed to be ‘probably the best Shakespeare comedy’. The Artaud Theater—which you’ll find on Koontz Street(!)—in Silent Hill: Origins pays homage to The Tempest. Not only are the monsters based off The Tempest, but there’s even a poster within the theater. Then there’s the Infinite Jest memento in Silent Hill: Shattered Memories, a ring with a skull-and-crossbones and the word ‘Ophelia’ who is, of course, Hamlet’s love interest. And I’m sure you all know what ‘Infinite Jest’ is referencing, right?

Silent Hill starts the Michael Crichton references simply enough with ‘Crichton Street’, one of the major roads in Central Silent Hill with (Carl) Sagan Street and Koontz Street coming off of it. Parallel to it is Wilson Street (a reference to F. Paul Wilson and not me, Michael David Wilson—"hey, so we’ve looked into the future and in a few decades MDW is going to start up This Is Horror, then he’ll write a Silent Hill column for LitReactor … should probably reference him in the game.”). In Silent Hill: Shattered Memories there’s the ‘My Flying Lizard’ memento, which is described as ‘Lost World Terry’. Crichton Street suggests this is a reference to Michael Crichton’s 1995 novel The Lost World, but it could also be referencing Sir Arthur Conan Doyle’s book which is a favourite story of Alessa’s and inspired the air screamer monsters.

In special re-releases of Silent Hill 2 there’s the additional ‘Born From A Wish’ scenario in which players control Maria. She finds herself in a mansion, the owner of which is Ernest Baldwin.

'The Wonderful Wizard of Oz' by L. Frank Baum

If ever there was a trippy children’s story that could be reclassified as horror it’s Baum’s The Wonderful Wizard of Oz (and if you want to take things to the next level there are the Wheelers in the film sequel, Return to Oz—holy shit, they give even the monsters of Silent Hill a run for their money). Anyway, back to Silent Hill, the Keys for Eclipse are named Lion, Woodman, and Scarecrow, and Alessa has a copy of The Wonderful Wizard of Oz in her bedroom. But the homage to the Wizard of Oz doesn’t end there—the keys’ locations reference Baum’s book. The Key of Lion is located next to a bottomless chasm in a police car. In The Wonderful Wizard of Oz, the Lion must leap over a chasm with Dorothy and the others on his back. And don’t forget the Lion wanted courage, hence the police car.  Then there’s the Key of Woodman, which you’ll find next to a decapitated dog’s head much as the Tin Woodman had to decapitate a pack of wolves. Finally, the Key of Scarecrow is found in a letterbox that can only be reached via a fallen tree. In the book, the Scarecrow suggests felling a tree to cross a valley.

The school located in Old Silent Hill pays homage to all sorts of things. It might not be a literary reference, but note how it’s based on (i.e. identical to) the school in Kindergarten Cop … I’m serious, go and Google the two right now and tell me I’m wrong (you can’t … I’m not). Then there’s the name, Midwich, referencing The Midwich Cuckoos by John Wyndham, though perhaps many will be more familiar with the film adaptation, Village of the Damned.  But step inside the school, we’re not done yet. In the bathroom, in the Otherworld, Dean Koontz fans will find something eerily similar to Phantoms. Written on the mirror is “Leonard Rhine, the Monster Lurks”, a parody of “Timothy Flyte The Ancient Enemy” which is also found written on a mirror.

This may not be a literary reference either, but consider this an Easter Egg for fans of the band Portishead. Inside Café 5to2 you’ll find posters of Portishead, who composer Akira Yamaoka has admitted to being influenced by. Don’t believe me? Listen to ‘Sour Times’ by Portishead and then listen to the Silent Hill theme. If you long for more then check out Portishead’s 1994 album Dummy and their 1997 self-titled follow-up.

So, over to you. What are your favourite literary references in Silent Hill?

Very cool article! Especially cool, because here are my favorites Stephen King and Ernest Hemingway. But I never loved Shakespeare. We studied his works in college and I had the task of writing an essay about his famous works. I didn't have much time then, so I used https://eduzaurus.com/free-essay-samples/romeo-and-juliet/ to write a good essay with the help of professional writers. This resource helped me well, so I recommend it to everyone!

Thanks for such an informative article! I learned a lot because I was not interested in such literature before.