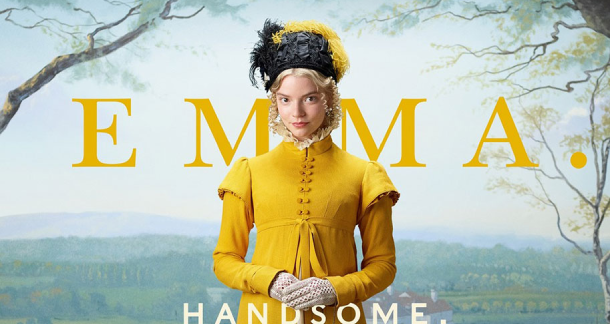 As I walked down a New York City street toward the Angelika Film Center & Cafe in the cold of winter, my friend and I chatted about our expectations for EMMA., the new adaptation of Jane Austen’s Emma, directed by Autumn de Wilde and starring Anya Taylor-Joy.

“It’s definitely trying to do something,” we concluded. “It’s got a vibe.” We just couldn’t figure out what that something was, and more importantly, whether we would like it.

Within minutes of the movie’s opening scene, I was entranced. The vibe, the ineffable something that my friend and I couldn’t put our fingers on, was just a smidge over-the-top, lightly ridiculous and self deprecating. Not so much that the whole thing became a farce, but just enough to let us know the filmmakers were aware of the somewhat outlandish aspects of the story they were telling.

EMMA. turned out to be a very charming, somewhat over-the-top, impeccably acted adaptation of one of Austen’s most famous works.

It’d been a while since I read Emma the book, but my takeaway from it was very sincere. I wrote an article explaining how my stance on the main character had changed during that final re-read, and I had grown to appreciate her for what I could learn about feminism because of her.

That’s not to say the book itself is written in such a sincere manner, but I never picked up on how ridiculous the story is, especially for an audience in 2020, until viewing this adaptation. A young girl, so rich she needs neither to work nor marry nor worry about anything, takes an interest in the romantic lives of those less fortunate than her in her little village; sometimes for good, as with the match she makes between her governess and Mr. Weston. And sometimes for ill, as with her reactions to Miss Bates, the town chatterbox.

Watching EMMA., a period piece that adheres closely to the original work, in this day and age, it would be easy to look at all the ways our world is different from theirs, and simply write the movie, and its source material, off.

But again, I go back to how self-aware it seemed to be. That made it immensely enjoyable, even the otherwise cringe-worthy scenes with Mr. Elton, because the movie gave the impression the actors, director, and characters themselves knew they were ridiculous, but were offering us a way to find meaning in their story nonetheless.

EMMA. turned out to be a very charming, somewhat over-the-top, impeccably acted adaptation of one of Austen’s most famous works, one which I highly recommend for those seeking entertainment, laughter, and a few tears at the emotional ending.

The one time I did cringe during the movie (well, four times, actually) was when one character is attacked by a group whom the other characters refer to using a slur reserved for the Roma. It was a discordant note in an otherwise charming movie, and the absence of it would not have been missed, while its presence was felt, and not in a good way.