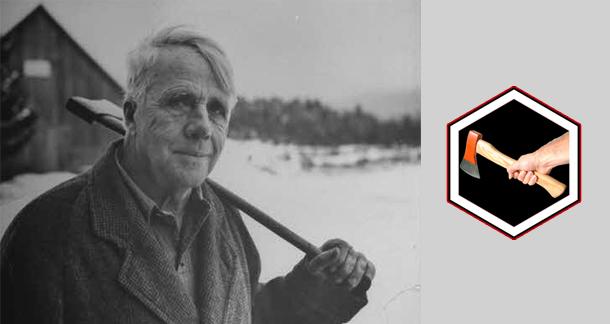 Hello, happy New Year, and welcome to 2015's all-new, all-poetry edition of "Culling The Classics." In the past, CTC has focused primarily on the supposed Great Works of Old White Guy Literature (with a few notable exceptions), helping to keep you the reader from wasting time on a boring/outdated/just plain bad so-called "masterpiece." It's tough out there for anyone who wants to seem well read, but for the past year and a half CTC has been determined to steer those who prefer reading for pleasure clear of white whales and harsh winds.

With all the millions and millions of books out there, though, the column just wasn't doing enough. There are so many books that people need to be saved from, so many authors not worth reading. Hell, there are entire genres, whole forms even, that plenty of people would love to dive into but don't know how—and of course, the scary world of poetry is perhaps the deepest end of the pool when it comes to finding new authors. How does someone who doesn't have a history with poetry know where to begin? Classic poets? Contemporary poets? Anthologies? Individual collections? To the uninitiated, poetry can seem like the literary world's idea of a millenia-old inside joke.

Fear not, though, dear reader! For this year "Culling The Classics" is making the shift to poetry. Each month I'll tackle an entire "complete works of" poetry collection for one poet, highlighting not only whether he or she makes for a good introduction to poetry, but also which collections and individual poems are worth visiting. It has never been easier to discover new avenues into poetry. Now sit back whilst I regale you with the best—and worst—of our first CTPC Poet: Robert Frost!

It's ironic that these ten or so famous Frost poems wind up being an introduction to poetry for so many, because the rest of his work is exactly the kind of thing that turns people away from poetry.

But first, a few ground rules. While I may touch upon important aspects of each poet's life, primarily this is going to only cover the poems, not any great or terrible deeds done. Also, when I say "only cover the poems," I mean no plays, no short stories, no novels: only the poems. Finally, instead of searching high and low to make sure that every single poem a given poet has ever written is tracked down, I'll be focusing solely on whatever is included in the most popular/easily accessible "complete works" volume. If you decide to play historian and dig deeper, more power to you, but I'm working on a deadline here.

Robert Frost (1874-1963); American; born in San Francisco, California. Considered by many to be either America's greatest poet, the greatest American poet, the most American great poet, or some combination of the three, though these titles are taken more seriously when "of the 20th century" is tacked on at the end. Four time winner of the Pulitzer Prize, named Poet Laureate of Vermont, and recipient of the Congressional Gold Medal, among other praise and honors. Died in Boston, Massachusetts, of complications from prostate surgery at the age of 88.

Frost published many collections over the course of his life, including several "selected" and "collected" editions, as well as a few plays and prose works. The volume I used was The Poetry of Robert Frost (Henry Holt and Company, 1979), edited by Edward Connery Lathem, which includes the following:

*denotes Pulitzer Prize winner; the second of his four Pulitzers was for Collected Poems (HH&C, 1930)

As is true with any poet, several of Robert Frost's poems are much better/more recognizable/more accessible than the rest. I've picked out a few of the best:

Are you now, have you ever been, or do you aspire someday to be one or more of the following: a poor farmer; a rich farmer; a fruit farmer; a vegetable farmer; a cow farmer; a sheep farmer; a goat farmer; a potato farmer; a pig farmer; a Christmas tree farmer; a lumberjack; a birdwatcher; an old timey midwife; related to Laura Ingalls Wilder, Henry David Thoreau, or Jack London; a New Englander; a longshoreman; or a wilderness preacher? THEN YOU PROBABLY ALREADY LOVE ROBERT FROST AND ARE JUST HERE TO TROLL ME.

If you answered, "Umm...no, absolutely not," to the question above, then you have not yet fallen under Robert Frost's backwoods spell. There's still hope!

The eagle-eyed reader will have noticed that there are no "personal ratings" for any of the collections after West-Running Brook. There are two reasons for this: 1) New Hampshire, considered to be Frost's best work and containing the majority of his most famous poems, was still somehow a slog to get through, but WRB is only like 30 pages, so I figured why not; and 2) I was hoping beyond hope that the monotone voice that I couldn't stand for one more line would change, but it never did.

Here's the thing about Robert Frost: his most famous poems are very, very good, but they are also atypical of his style. Sure, they touch upon the same New Englandy themes and subjects, and they take place in a similar setting, that intersection between farmland and woodland that so beautifully marries the wildness of nature with traditional American ideals like hard work and neighborliness. They don't match Frost's usual rhythms and natural cadence, though. Take "Fire and Ice," for example:

Some say the world will end in fire,
Some say in ice.
From what I’ve tasted of desire
I hold with those who favor fire.
But if it had to perish twice,
I think I know enough of hate
To say that for destruction ice
Is also great
And would suffice.

Some of Frost's poems rhyme, some don't, so this jagged abaabcbcb doesn't stand out much in that respect. The seeming randomness in line length is a HUGE departure from Frost's usual form, though, which is a very stiff decasyllabic line, usually ending in a complete thought without much enjambment, as is found in "Mending Wall," the most effective use of his otherwise mundane voice:

Something there is that doesn’t love a wall,
That sends the frozen-ground-swell under it,
And spills the upper boulders in the sun;
And makes gaps even two can pass abreast.

Ad infinitum. Almost all of Frost's poems follow that same pattern, with variation usually only coming in the form of rhyme scheme changes or omissions. It's almost childlike in its repetitiveness after a while: "My name is Robert Frost; I am a bore. / You read my best in school—my best is good, / that stuff about stopping by snowy woods. / The rest is like some pre-dawn farmhand chore." It really is this departure from the norm that makes Frost's best poems stand out so much. Consider the nine-syllable lines that Frost uses for "The Road Not Taken"—

Two roads diverged in a yellow wood,
And sorry I could not travel both
And be one traveler, long I stood
And looked down one as far as I could
To where it bent in the undergrowth;

When a friend calls to me from the road
And slows his horse to a meaning walk,
I don't stand still and look around
On all the hills I haven't hoed,
And shout from where I am, 'What is it?'
No, not as there is a time to talk.
I thrust my hoe in the mellow ground,
Blade-end up and five feet tall,
And plod: I go up to the stone wall
For a friendly visit.

—both of which force the reader to jump down to the next line due to the feeling of incompleteness summoned by the missing tenth syllable. "Stopping by Woods on a Snowy Evening" and "A Question" contain eight syllables per line, and "Nothing Gold Can Stay" goes all the way down to six, which is very rare for Frost,* but again one of the reasons why it stands out among his many hundreds of poems.

(*To be fair, West-Running Brook breaks tradition a little, but not by much; that collection is made up mostly of very short, unrelated poems. However, it feels like Frost happened to have a handful of poems that he just threw together for the fun of it. It isn't very cohesive, and the poems aren't particularly good.)

One of the only other poems to make successful use of the ten syllables that Frost preferred for the vast majority of his verse is "Acquainted with the Night," but it stands out by utilizing tercets instead of the block stanzas that Frost often lazily employed and an aba bcb cdc ded ee rhyming weave pattern.

I have been one acquainted with the night.
I have walked out in rain—and back in rain.
I have outwalked the furthest city light.

I have looked down the saddest city lane.
I have passed by the watchman on his beat
And dropped my eyes, unwilling to explain.

All of which is to say that, aside from this handful of poems (most of which you've probably already read considering how highly anthologized they are), Robert Frost is boring as fuck. His voice, structure, and themes—his entire poetic essence, really—never changes at all. There's very little growth or evolution.

Maybe I'm being unfair; I did only read the first five collections. In my defense, though, that's still almost 275 pages, about 200 poems total. For there to only be about a dozen among all of them that feel (refreshingly) different doesn't bode well for the remaining 300 pages. Also, among Frost's ten most famous poems, only "Acquainted with the Night" and "A Question" were published after New Hampshire.

It's ironic that these ten or so famous Frost poems wind up being an introduction to poetry for so many, because the rest of his work is exactly the kind of thing that turns people away from poetry. It's at times too ponderous and vague, at times too pastoral, at times too overtly in love with the rural New England way of life. Frost was a deeply troubled poet who suffered greatly from depression, something that comes out in the most remarkable and unexpectedly beautiful ways in some of his poems. On the whole, though, he's not the kind of poet who really makes for a good poetic gateway drug. There's very little to connect with today. Read the highlights, absolutely, but skip the collections. You read one and you've read them all.

Be sure to check back in next month when I go through the Collected Poems of one of the great depressing romantics of the 20th century, Edna St. Vincent Millay—just in time for Valentine's Day! Borrow the book from your local library and it'll be like an angry poetry book club.

Also, if you have any suggestions for other classic poets that need a good culling, or if you're one of the above-mentioned farmers come to troll me for hating on Robert Frost, let me know in the comments!