Culling The Classics: One Hundred Years of Solitude 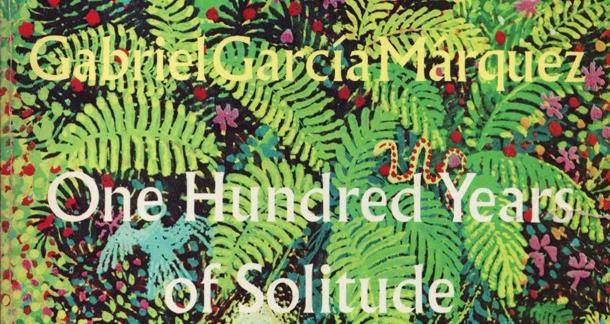 There was an unwritten rule when "Culling The Classics" began that, whatever else one might be able to say about a book, it had to be at least 50 years old to qualify as a "classic" for our purposes. First published in 1967, One Hundred Years of Solitude still has three years before it officially reaches that "classic" age, but sadly Gabriel García Márquez died last month, and this is the best way I knew to honor him. And besides, every rule deserves an exception.

Possibly the greatest novel ever written; winner of the Chiaciano Award, the Prix de Meilleur Livre Etranger, the Rómulo Gallegos Prize, and the Books Abroad/Neustadt International Prize for Literature (among others); major factor in Márquez's 1982 Nobel Prize for Literature; Goodreads rating of 3.97.

Explore seven generations in the history of the Buendía family in the fictional town of Macondo, Colombia.

MANY YEARS LATER, as he faced the firing squad, Colonel Aureliano Buendía was to remember that distant afternoon when his father took him to discover ice. At that time Macondo was a village of twenty adobe houses, built on the bank of a river of clear water that ran along a bed of polished stones, which were white and enormous, like prehistoric eggs. The world was so recent that many things lacked names, and in order to indicate them it was necessary to point. Every year during the month of March a family of ragged gypsies would set up their tents near the village, and with a great uproar of pipes and kettledrums they would display new inventions. First they brought the magnet. A heavy gypsy with an untamed beard and sparrow hands, who introduced himself as Melquíades, put on a bold public demonstration of what he himself called the eighth wonder of the learned alchemists of Macedonia. He went from house to house dragging two metal ingots and everybody was amazed to see pots, pans, tongs, and braziers tumble down from their places and beams creak from the desperation of nails and screws trying to emerge, and even objects that had been lost for a long time appeared from where they had been searched for most and went dragging along in turbulent confusion behind Melquíades' magical irons. "Things have a life of their own," the gypsy proclaimed with a harsh accent. "It's simply a matter of waking up their souls."

This is actually the most difficult "Culling The Classics" for me to write, because it's the book that I feel most strongly that every single human being on the planet should read. The weight of that conviction is immense, and it's tough to do it justice. I first read One Hundred Years of Solitude while I was back home at my mom's house in New Jersey for Christmas in 2008. I never adjusted from being on Pacific Standard Time, so late at night when everyone else was asleep I would read for hours. I don't know if One Hundred Years of Solitude was the only book I read that week, but it's the only one I remember reading, because it genuinely changed the way I lived my life.

I had always secretly been a poet, but it wasn't something that I thought I could do for a living. I didn't believe that it was something I could actually support myself with emotionally and economically. One Hundred Years of Solitude changed that. I found it to be such a perfect work of literature that I couldn't imagine doing anything else with my life but striving to create something even half as beautiful. When I got back to LA, I immediately started a book review site just so I could write about my thoughts on the novel. I ran the site for over two years, eventually turning the experience into paid review work for magazines and newspapers and online journals. I almost certainly wouldn't be writing for LitReactor today if I hadn't started writing those reviews back then.

That's probably the most minor effect that it had on me, though. I also started writing more consistently. Up until that point I mostly wrote in waves, huge surges of activity followed by months of speculation and doubt. There was no attempt at artistry or any editorial focus; it was merely base expression propped up with line breaks. After reading One Hundred Years of Solitude, I was determined to give my craft the dedication it deserved, and a friend and I started 5x500, where we still post weekly poetry and short fiction five years later. Also, I saw the publication my own book, Broetry, in 2011, a book that I never would have had the dedication to write if I hadn't been so deeply inspired by Márquez's work.

Of course, none of this really tells you anything about the book itself. (Well, 2009 Brian's review does, but what did he know?) One Hundred Years of Solitude is, at least in my opinion, the strongest, most complete novel ever written. Through an endless stream of flashbacks and anecdotes and leaps forward and cyclical themes and incredible scenes of magical realism, we get to know seven generations of the ill-fated Buendías and their mystical town, Macondo. The family suffers through war and famine and internal strife and scandalous affairs and every other possible calamity, and in a manner that is both intensely realistic and wildly absurd.

There isn't any other book that I would feel confident enough in to recommend to absolutely every person on this planet. I don't mean everyone like me, or everyone who reads, or even everyone who can read: I mean every single person born on this planet. I know of no other novel that so deeply touches upon such a breadth of themes, experiences, and emotions. Márquez's manipulation of time is amazing, his insight into familial dynamics is beyond anything I've ever experienced, and his ability to maintain a humorous tone for much of these 400+ pages absolutely blows my mind. I couldn't possibly recommend it more highly.

Many people today know of Gabriel García Márquez as the author Love in the Time of Cholera, an Oprah's Book Club book that is often on high school and college reading lists. Love in the Time of Cholera was published in 1985, though, 3 years after Márquez was awarded the Nobel Prize for Literature largely due to the immense critical and popular success of One Hundred Years of Solitude. Ever the irrational skeptic, I rarely so ardently support a book that's at the forefront of literary scholarship and at the top of so many "best" lists. The truth is, I just don't care. It's an incredible book, and you should read it. Now. As your next book. Or again if you've read it already. Go. Stop wasting time here with me. No collection of words or thoughts that I ever string together in this life or the next could possibly be better for you than those in One Hundred Years of Solitude.

The Gift of Gab: Mastering the Maximal