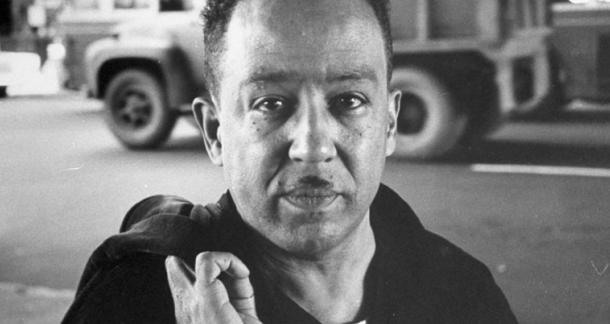 It's very difficult to cover the truly immense scope of the poetic world and its rich history through a kinda-monthly-but-let's-be-real-bimonthly column. It's even harder when I'm an American who only reads in English and who only went to American schools and who really was only ever actively taught the Great White Males of Literature with a smattering of Great White Females of Literature thrown in every so often.

But I want to learn. There's a lot of amazing writing out there that I was never taught, but that's no excuse for not having read them. That's the entire point of Culling The Classics, right? We're all in this to expand our literary worldview. For many people, Langston Hughes is not an expansion of their literary worldview, but very much crucial to it. I went a good couple decades without ever reading anything by Langston Hughes beyond the token Harlem Renaissance classics, and good gracious was I missing out. Yes, he's another American, and yes, he's another male, and yes, he's another early-to-mid-20th-century darling (I had to make an exception for his inclusion due to his death date, something I haven't done since 100 Years of Solitude), but sometimes progress is slow. Make more suggestions in the comments and I'll be glad to expand my reading horizons even further.

Langston Hughes (1902-1967); American; born in Joplin, Missouri. One of the foremost voices in African-American literature, and one of the truest chroniclers of the American experience in poetry. Leader and one of the most lastingly famous members of the Harlem Renaissance of the 1920s and an incredibly accomplished writer and activist during the later half of his life. Awarded a Guggenheim Fellowship and several other prestigious honors for his poetry during his lifetime. Died in New York City at the age of 65 due to complications following a surgery.

Hughes possibly more than any other American writer I've read covers the widest swathe of American life and society in his work.

Langston Hughes put out over a dozen collections over the course of his long career, but these hardly comprise the entirety of his poetic work. He wrote hundreds and hundreds of poems, published across a vast array of mediums including newspapers, magazines, journals, and collections, as well as within his novels, short stories, plays, operas, and essays. The volume I used was The Collected Poems of Langston Hughes (Goodreads rating of 4.29), which primarily groups the 800+ poems collected within by decade, although two distinct collections are kept together for reasons that the editors explain in the introduction. I've included the book's divisions below:

Moreso than reading the individual collections in their publication order, reading all of the writer's poetic work in chronological order brings to prominence the many recurring themes dealt with over the years.

As is true with any poet, several of Langston Hughes's poems are much better/more recognizable/more accessible than the rest. I've picked out a few of the best:

It's entirely possible that you won't love all of him, but no matter what your tastes, there's a lot to love.

I can't really even imagine a reason why anyone would actively dislike Langston Hughes. Maybe he's generally not your cup of tea, but he really did it all, so there's something for everyone. The main criticism most often leveled against him is that he wasn't high-brow capital-L Literary enough, but that's bullshit. A number of his poems prove that he could be when he wanted to be, but he got more joy from representing the voice of America.

Read It or Leave It

The Collected Poems of Langston Hughes is simultaneously a very easy and very difficult book to read. On the one hand, most of the poems are incredibly short, sometimes even four to a page. On the other hand, there are so damn many of them. The latter fact wouldn't even be much of an issue, but Hughes frequently repeated themes and scenes and cadences and refrains. I lost count of how many poems had the words "blues" in the title. Coupled with the sing-songy juvenility of what has come to be known as his jazz poetry, taken in large quantities the repetition can be a little much.

But then, holy heavens, Hughes bursts out with a string of absolute gems. "After Many Springs," "Justice," "My Beloved," and "Gods," for example, all appear within ten pages of each other, surrounded on all sides by jazz poems and basic scenes of daily life.

Now,
In June,
When the night is a vast softness
Filled with blue stars,
And broken shafts of moon-glimmer
Fall upon the earth,
Am I too old to see the fairies dance?
I cannot find them any more.

That Justice is a blind goddess
Is a thing to which we black are wise.
Her bandage hides two festering sores
That once perhaps were eyes.

That's a lot to stumble upon in a sea of jazz bands and jilted lovers. These four poems were written in the '20s when Hughes was still very young, so they stand out against the less-developed poetry that frequently appears during this period. (I say "less-developed," but "The Negro Speaks of Rivers" was his first published poem, so clearly he knew what he was doing from day one.) As Hughes got older, his mastery grew and his themes, word choices, and imagery all became more complex. At times he played with form and content by "staging" short dramatic poems, where a character is introduced who delivers a short monologue, the text of which appears alongside poetic stage direction. These mini-plays cover topics that were on the minds of many Americans at the time, such as the role of black men in society, the expectation that fighting for the United States in World War I meant more rights would be acknowledged for African-Americans, and the difficulty of finding work during the Great Depression. There are very few poems that aren't in some way uniquely American, representative of one segment or another of the great melting pot that is the (at times failed) American experiment.

The biggest mistake that I made before reading Langston Hughes was to for some reason to label him an African-American poet. First of all, what does that even mean? Are there rules that poets of various types must follow? Do African Americans pull solely from a different pool of words for their writing? Was Langston Hughes in any respect beyond the color of his skin fundamentally different from other American writers?

Actually, to that last question I would answer yes. The main difference between Langston Hughes and other American writers is that Hughes's work covers the whole of the American experience. Despite how adamant academia is about forcing him into the Harlem Renaissance, this box of "acceptably prominent" African American letters, it is Hughes more than any other American poet who speaks for everyone. This quote is taken from the Poetry Foundation page on Hughes:

Du Bose Heyward wrote in the New York Herald Tribune in 1926: "Langston Hughes, although only twenty-four years old, is already conspicuous in the group of Negro intellectuals who are dignifying Harlem with a genuine art life. . . . It is, however, as an individual poet, not as a member of a new and interesting literary group, or as a spokesman for a race that Langston Hughes must stand or fall. . . . Always intensely subjective, passionate, keenly sensitive to beauty and possessed of an unfaltering musical sense, Langston Hughes has given us a 'first book' that marks the opening of a career well worth watching."

For one reason or another, Hughes really took to the idea that he was not "a spokesman for a race." A great number of his poems deal with African-American issues and are written in African-American vernacular of the time, but if anything, this hyper-focus on the average black American of the early 20th century brings out the universality of his work. It is not African Americans alone who suffer the pains of being left by a lover; they do not have a monopoly on worrying about holding a job or wondering about god or being angered by their government. At times Hughes's poems do mention very specific African-American concerns like lynching and Jim Crow and institutional racism, but the error lies in thinking that these are somehow not as distinctly and fundamentally American topics as 1930s bread lines and the wealth gap. Just because other writers in the "traditional" American canon of literature don't focus as directly on the troubles faced by African Americans does not make those troubles any less representative of American life. Hughes possibly more than any other American writer I've read—certainly more than any other American poet—covers the widest swathe of American life and society in his work, which more than makes his 800+ poems worth reading. There really is something for everyone among these pages, from jazzy scenes of daily life to complex polemics against specific issues and everything in between, and it annoys me that I had never seen his work presented that way.

I no longer care what academia and the American educational system deem "classic" poetry, because it's clear to me that it only coincidentally overlaps at times with actually good poetry. Are there poets out there that you think I should read and tell everyone about? Let me know! The only stipulations are that they must be at least 50 years deceased and that there must be a complete volume of their collected work (sorry, Rilke). Drop a name in the comments or send me a message and I'll get to work reading!