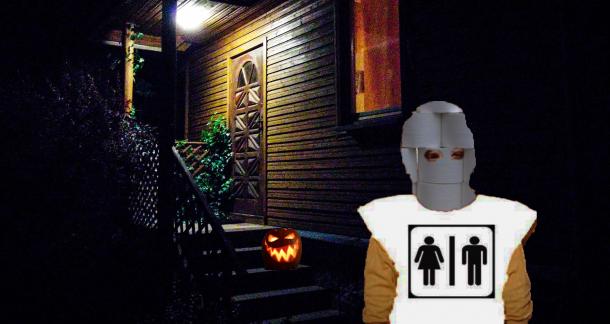 The costumes they made were crappy. In terms of materials, looks, fit, really any objective measure, these companies made shitty getups. But they were also super fun, and besides, getting a crappy costume had a hidden advantage: If your costume from last year barely held up for one night of trick-or-treating, you HAD to get a new one for next year. Sure, you might want to be He-Man this year, but next year? That's for babies.

And, okay, they had some hallmarks that were pretty weird. 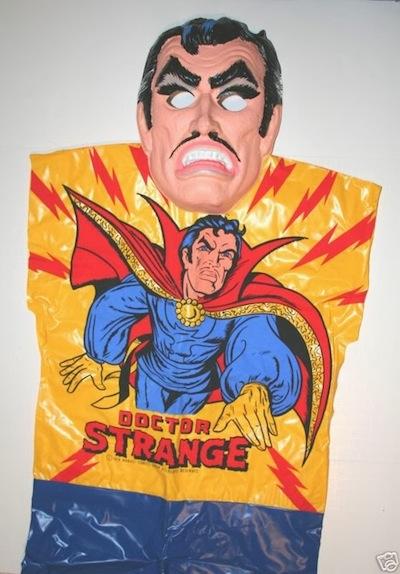 Take this Doctor Strange costume, for example. When exactly did Doctor Strange wear a plastic smock with a picture of himself on it? And his name spelled out? This always infuriated me as a kid. Why couldn't they just make the smock look like what the guy wore?

And why sleeveless? Why the shiny blue pants? 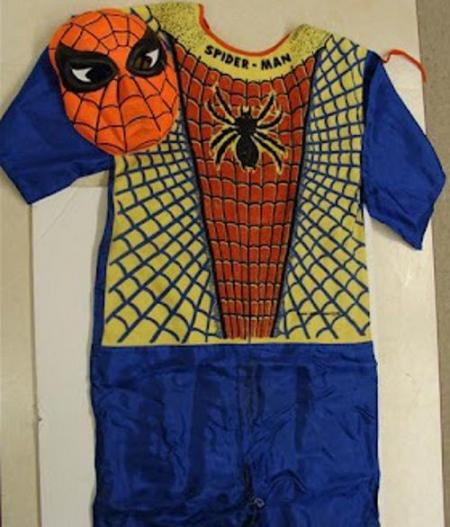 And this one? I OWN this costume. The mask is pretty cool, clearly someone involved saw a Spider-Man comic at some point. But, as someone who has read hundreds of Spider-Man comics, who has seen Spider-Man run through dozens of outfits, I've NEVER seen this getup outside of this Ben Cooper costume. The manufacturers had so many choices for Spidey threads, and they just decided to make their own design? Because one of the most iconic superhero costumes of all time wasn't good enough?

By the way, if you're thinking of buying one like this for Halloween, let me give you a piece of advice: It's not going to fit. It's not common for me to feel too ripped to fit into clothes, and I felt like a bodybuilder trying to get into a child's wet suit when I tried to squeeze into this thing.

Though these companies made some pretty weird costumes, like a Rubik's cube costume, one for the Asteroids video game, and an Alien costume that looked like the result of an unholy union between a xenomorph and a designer committed to MS Paint as his primary artistic tool, they never got into a lot of literary costumes. Stuff for book nerds.

Let's right that wrong. I've got some suggestions. 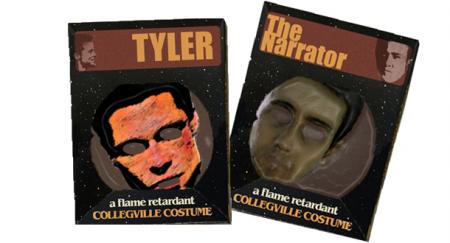 Let's be Tyler and the Narrator. We can get in a literal fistfight. We can take turns being Tyler and being a jerk and being The Narrator and pretending we don’t know what’s going on. You could also do this one solo, bring both masks, and blame all your party fouls on Tyler. This isn't just a costume, people. It's an entire party survival strategy. 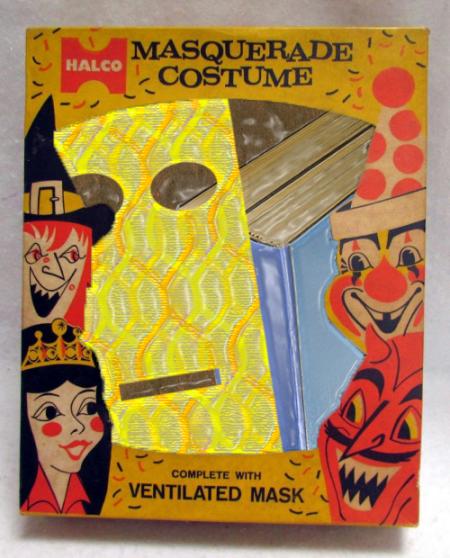 My hatred for "The Yellow Wallpaper" runs deep. So you can bet I’d be terrified if you rolled up wearing a swatch of yellow wallpaper with eyeholes cut in it, ready to talk about literary theory. There is no one I'm avoiding harder at a party than the person wearing this, explaining it to everyone, and pretending to be exasperated when people don't immediately recognize the importance of Gilman's work. Bonus, this mask comes packaged with a bound thesis titled "The Existentiafeministic Horror of The Colonization of Womyn’s Bodies as Demonstrated by Charlotte Perkins Gilman’s 'The Yellow Wallpaper' Volumes I and II." If you’re tired of Halloween parties due to the constant threat of fun breaking out, this is the costume for you! 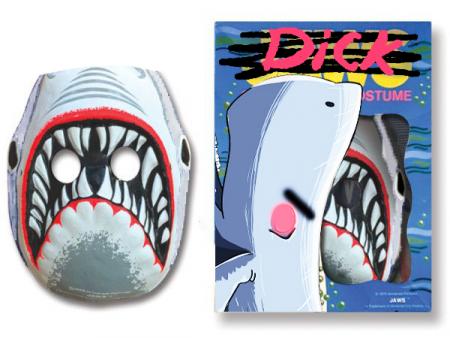 Okay, we just robbed the factory and repurposed a bunch of old Jaws costumes. Repainted the box, blunted the snout a little. But hey, are we here to pay reverence and respect to an important time of year, or are we hear to make some fuckin’ money!?

This is a big step in the right direction for my agenda, which involves getting whales reclassified as sharks. What, exactly, is the difference between a shark and a Killer Whale? Isn't a shark just a "killer whale" when you get right down to it? If you've watched any kind of nature documentary, it seems like Killer Whales basically spend their time killing and/or terrorizing adorable animals. What's the difference between Jaws and Orca, really? I think Killer Whales just have much better publicists.

Be a part of the movement to raise awareness of just how dangerous these bastard whales are. 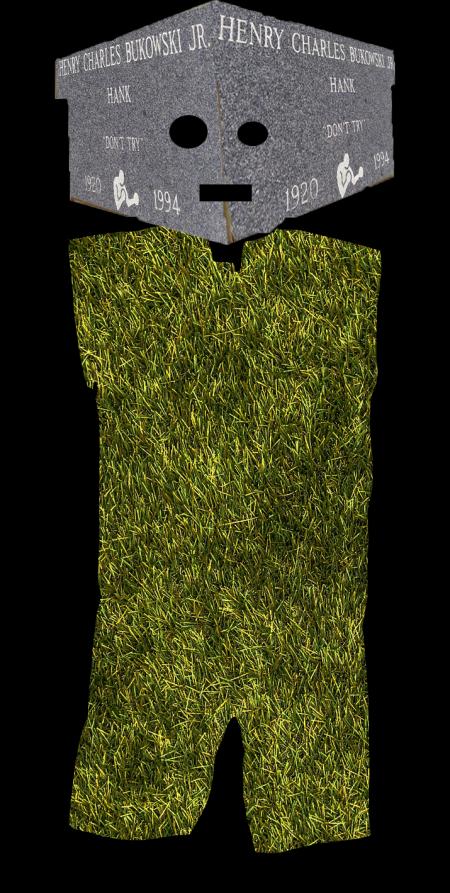 Graves are Halloween-y, right? And what grave is better than that of Chucky B.?

Plus, there’s nothing that pleases me more than a plastic smock printed with a pattern of natural plants. That shit’s hilarious.

The best part is that the whole getup comes in a box, which converts into a mask. Less wasted packaging. And boy, does it give you an excuse to tie one on at the party. A sober Bukowski grave? That doesn't even make sense. 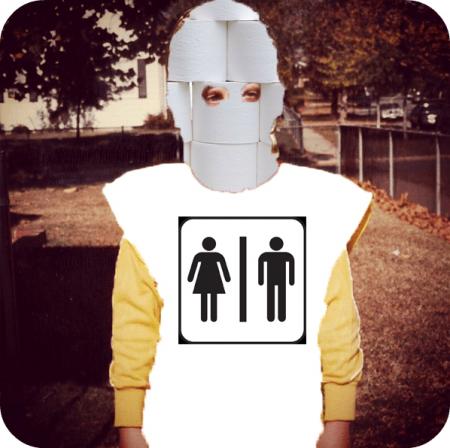 Gonna be honest, I took A LOT of bathroom breaks in high school when we read Great Expectations out loud in English class. My memories of this Dickens classic are mostly about coarse, crappy public school toilet paper. Which, by the way, everyone wants to talk about free college, meanwhile public school kids are wiping their asses with what is essentially thin-sliced, unprocessed tree. How am I supposed to learn enough to succeed in a college environment when I spend half my high school career holding in shits in order to avoid using the bathroom and feeling like I had my butthole sandblasted? 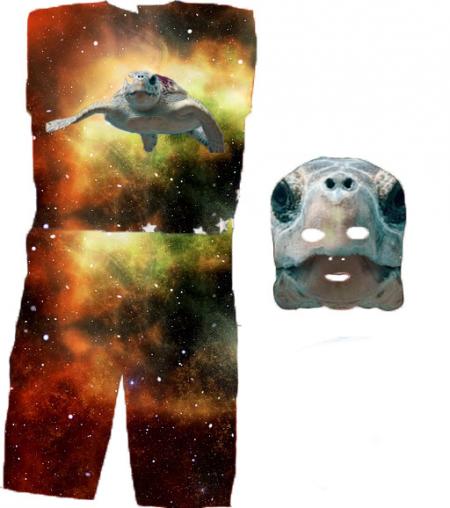 Stephen King loves him some space turtles. There's It, there's Dark Tower. If there's one thing that Stephen King likes more than farts, it's turtles cruising the spaceways and getting murdered for their trouble.

The other good news, you know that weird smell that comes when you open up a fresh plastic costume? You can explain it away by saying it's space turtle smell. I've smelled a turtle or two in my time, as have we all, and a timeless, ageless space turtle HAS to smell pretty weird. 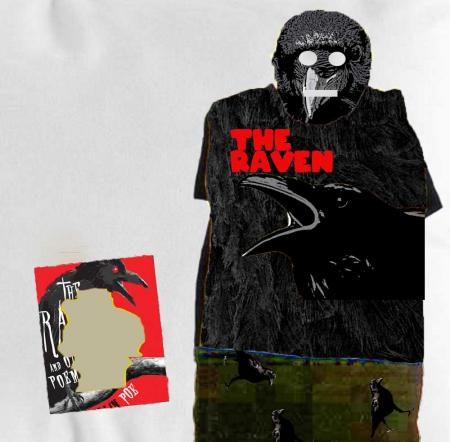 This is the perfect representation of how it works in English class. Your teacher hypes you up for the scariest gorefest story of all time. Your English teacher maybe even wore a cape if they're that kind of teacher, the one that cares but is also secretly waiting for their "O' Captain" moment that ain't never comin'.

Then, you open it up, it's not scary at all, it's a huge disappointment, and yet you still hear about it all the time.

The rumor is that Poe died from drinking too much when he was sort of tricked into voting or something. If he died any way other than exploding out of boredom, the fate he condemned so many school kids to, then he got off light. 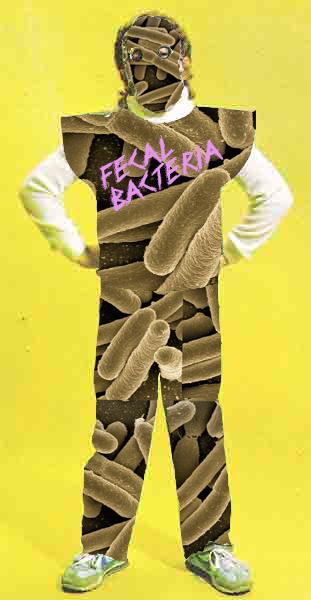 You put on this mask, you carry a pocketful of Good N Plenty and drop 'em everywhere, you've got a costume AND a party favor in one. Plus, if you ask me, Good N Plenty definitely tastes like ass.

How’s fecal bacteria literary? Ha! You think a single used or library book you’ve ever held isn’t shellacked in shit? Hasn't been read on the toilet while someone's nether region committed a complete toilet atrocity? Must be nice to live in your world of pure imagination. Those of us in the real world are gonna go ahead and dress like poo particles, thanks.

Feel free to design your own Ben-Cooper-style literary costumes and leave them in the comments.

LURID: Furry Monsters - When Good Pets Go Bad
What Scares You? 30 Terrifying Horror Stories Straight Out Of Your Worst Nightmares

Cool story, never heard of. I had a black panama hat from cools and a dark cloak on the last Halloween. Maybe I'm gonna change my dress code this year.