What's With Stephen King and Farts? 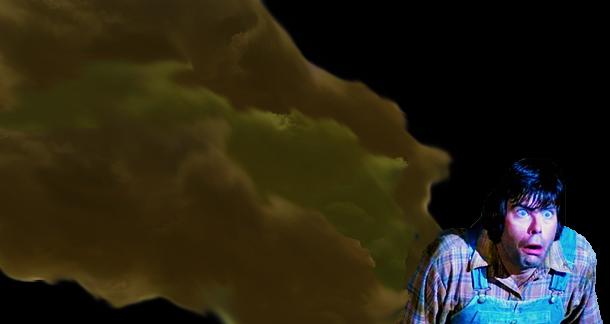 I’d just like to point out that writing this column is technically a job for me. And by writing it, I’ve confirmed the saying is true: “Do something you love and you’ll never work a day in your life.”

I got a late start on Stephen King, but since I got rolling I’ve been plowing through his books faster than a heinous fart wrecks a nice Sunday morning in bed.

And something bubbled up in in the course of my reading: King isn’t shy about farts. His characters fart. They talk about farts. Kind of a lot. I’m sure there’s a joke about so much of his stuff taking place in Derry and so many of Derry’s residents being lactose-intolerant, hence the gas. I can’t quite work the joke out, but you get the drift. Give me partial credit and we can all move on.

This is a column about farts.

He Who Smelt It, Dealt It

Who’s farting their way through King’s books? EVERYBODY!

Old guys, women, dogs. Everybody who farts in our world farts in his. There are, however, some patterns, some notable categories.

Many, many King characters refer to themselves and others as “old farts” who are “farting around” or “farting their way through” their golden (brown) years. While this is a common colloquialism in The States, I tried to find out whether it had any specific connection to Maine, and while I was a little disappointed, I did find a Maine-centric saying, a way to describe something as very small: “It’s no bigger than a fart in a mitten.”

There is at least one instance, in Cujo, of someone being called a “young fart,” and in Insomnia someone uses the phrase “short-time farts” to talk about someone who’s not around all that long.

I’m not sure what’s worse, a fresh fart or an old, stale one. Both sound bad. I think I’d go with the stale fart, if I had to take a deep whiff of one or the other, but I’d be concerned that the staying power of an old fart means its A) VERY powerful and B) perhaps fermented to an extent.

Old farts versus young is a topic that could be its own column, nay, website, wait, no, PhD dissertation. Let’s move on.

Machines fart in King’s world. Exhaust farts from the backs of cars. A lawnmower farts smoke. A calliope farts out its tune. I’d never heard calliope music, but after checking it out, it’s farts. Farts that you control on a keyboard, they’re tuned, but a fart that’s a C# is still a fart.

A selection of tasty nuggets:

The whole place could fall flat and I wouldn’t fart sideways to a dime.

...Jonesy is, as they say, farting through silk.

I don’t give a fart in a high wind…

Allison, still walleyed and only one small step from unglued, looked ready to shoot the moment a squirrel farted.

And then, there are farts. Sparrowfarts (Carrie), Swamp-gas farts (Dreamcatcher), winofarts (Insomnia), farts in a doctor’s face (Insomnia), dog farts (Roadwork), bedfarts (The Stand), which are later shaken out of bed sheets (Rose Madder).

Sayings, terms of endearment, machine farts—they’re all great. But we have to give it up for a good ol’ fashioned two-cheek squeak.

I’m assuming this is enough proof for the doubters, if there ever were any, that farts have a place in Stephen King’s books. And his heart. And, presumably, butt.

But the question remains: Why?

Disagree? Then I’m betting most people don’t think of you as terribly fun, and I’m guessing you’re not a go-to judge of hilarity.

I don’t know how to convince you that you’re wrong. There aren’t a lot of scientific studies. I couldn’t find anyone who’d thrown someone into a functional MRI and played fart noises to see what parts of the brain light up. But I think you know the truth. If you genuinely don’t find farts funny, you’re wrong.

We need a laugh now and then in a King book. Badly. And if a fart will do the trick, why set up an elaborate joke? Why make a pop culture reference that’ll be outdated in a year? Make with the gas!

Are erudite things funny? Sure, sometimes. But they don't have mass appeal. It's 2019, we have the entirety of the internet and access to damn near every piece of culture ever created, and 14.6 million of us subscribe to FailArmy's YouTube channel because it's funny to watch people fall down.

One of Tom Spanbauer/Chuck Palahniuk's big messages to writers is that a narrator must establish authority. The narrator/main character has to answer the reader question: Why should I believe you?

There are two basic ways to do it: Head and Heart.

Head involves making someone an expert. If I believe someone knows their shit, I'll listen to them when they talk about that shit, and that authority will transfer to other things as well.

Heart is about being vulnerable. If I believe I'm seeing someone unguarded, I'm more inclined to believe them.

Sharing a fart with a reader lets them in on a little secret. A little joke, a little biology, between the reader and the writer. When a character blows ass, the reader feels they’re seeing a character be real, be vulnerable. If I just watched a character cut loose with a real ripper, I have every reason to believe that this character is unguarded, acting naturally, and whatever comes next, I buy that behavior as authentic.

A fart is a great way to establish authority.

If a laundry folding machine can be evil in King’s world, then all bets are off in terms of malicious inanimate objects. We, as readers, can never be sure where the threats are coming from.

When a car “farts” out its exhaust, it becomes more alive. When a calliope farts out its melody, we have to wonder whether there’s something more sinister going on there beyond shitty music. The fart-y quality of King’s objects blurs the line between living and not, neutral and evil.

Anthropomorphizing isn’t always a good thing. If your elevator door “hisses” shut, some writers will tell you you’re being lazy. Because an elevator doesn’t hiss. It doesn’t have agency, it doesn’t create a noise the way a person or an animal does. It’s not alive.

And maybe farts are a better way to handle this whole imbuing objects with life thing. Farts are sometimes involuntary. They don’t feel controlled the way a hiss does. Farts might be a way to live in the (brownish) gray area between making your objects too human and giving them just enough life to keep the world consistently threatening.

Because King has so much cosmic, weird, horrific shit going on in his books, we sometimes need to snap back to reality. And there’s no quicker way than a fart.

If you were blasting through a weird spacewarp with an old cosmic turtle, wouldn’t a fart bring you back down to Earth? If you were traveling cross-country after a plague decimated the population, wouldn’t you still fart now and then?

There might be nothing more human than a fart. I’m not proud that I had to be the one to say it. But it’s true, farts keep us real, keep us grounded. They’re a part of who we are.

Just remember,when you’re looking at a glamorous star on the red carpet, she’s fired out a fart that’d level a building. When you’re watching your favorite dreamy TV doctor, remember, that dude has blown the back out of a pair of pajama pants at least once in his life.

Farts are an equalizer. Much as we all have blood, bones, and teeth that look fucking terrifying when they’re removed, we all fart.

Farts aren't what make us human, but they make it hard to forget who we really are.

Take a page from Stephen King’s book. He’s got like a billion pages, so you stealing one won’t bother him much.

Let your characters fart. Try it.

Got a character who’s involved in a boring dialog? Throw in a fart.

Are you looking to ratchet up the tension while a character is hiding? Fart.

Is there a medical situation going on? You’d better believe farts play a part there.

Want us to understand that your characters are intimately acquainted? Fart it up.