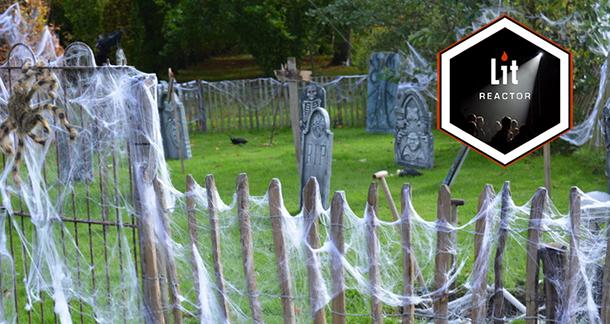 There's a rental house I see every day when I walk out to my car. It's a normal house, fits into the neighborhood, nothing special. Right now, for Halloween, the front yard of that house is full of fake webs, witches, ghouls, all the spooky stuff a Walgreens can provide.

And there's something genuinely eerie about it.

It's not the flying skeleton wrapped in a burlap cloak, holding its bony hands up over its head in that classic ghost pose. It's not the giant spiders that, in the evening, look even bigger somehow.

What's eerie about the house is that six months ago, a real murder victim was found inside. A body locked in a trunk.

Somebody was killed in that house, or at the very least, their body was squirreled away.

And whoever owns the house decided to go ahead and decorate for Halloween. And to decorate with maximum effort.

October is my favorite time of year. And I think that part of why I love it so much is that it's the one time of year when we really put our fears on front street (which is the new name for the street formerly known as "Fear Street"). Any other time of year, you would be crazy to suggest that you and a couple friends go out into a cornfield and walk around in hopes of being chased by a man with a chainsaw. If, year-round, you had poseable paper skeleton on the wall, and if you had the gumption to call this a "decoration," you'd probably find yourself a bit less popular.

But not in October.

October is the month when the rest of the world comes just a little closer to the strange side of the table.

Everything in our Spooklight this month demonstrates the playing out of a fear. Fear of failure. Fear of making a boatload of cash from publishing a new book. Fear that your colorectal surgeon won't find you attractive. And so, each piece of the spotlight starts with a representative fear.

We hope you enjoy this month's entries. And if you haven't already, get your ass to that Halloween aisle at Walgreens. If you're the only house without some kind of representation of evil haunting your front porch, people are going to wonder... 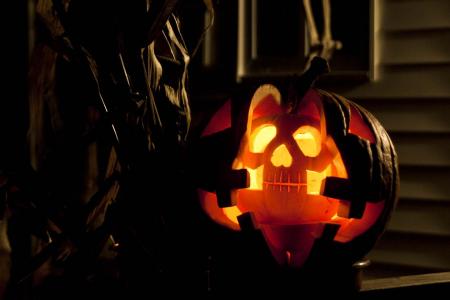 Chronophobia: Are We Wasting Our Lives?

A discussion started in July over in the forums has yet to lose steam. The thread, titled "Creative Writing is a Joke" is all about the important discussions of money, happiness, art, struggle, and people being nosy jerks. Writers, non-writers, parents, young and old have weighed in. Why don't you?

On the one hand:

It is a lot easier to write with the lights on.

On the other hand:

I can deal with being in debt. I can't deal with turning my back on what I want my life to be.

The thread has eerie parallels to the Chuck Palahniuk essay, "The Haunting: How To Conquer The Shame Of Being A Writer," which you can read here, you lucky ducky.

We held our first mini contest, "Novelizate An Action Flick!" and are proud to announce V.R. Stone as the winner. His invented movie, with title, tagline and short synopsis:

Can retired racer Cole Trickle combat his mid-life crisis by winning one more race and persuading his colorectal surgeon to sleep with him?

Not to be outdone, user Thuggish came in with this entry:

Stone won the day, and for his efforts won a copy of the movie novelization of The Long Kiss Goodnight.

Of course, there's a new contest, Deep Dark Fears, to finish out October. Check it out here. Enter...if you dare!

Brooke Reynolds, aka user Daltonwriting, won 2nd place in a writing contest over at Channillo. Her story, "Dr. Google," is the first story she submitted to the Workshop here at LitReactor.

Hmm. She submitted a story here, went through the wringer, and won a prize. Coincidence? Likely not.

Maybe it’s a tick. Ohhhh, no. No. No. No. Not a tick. Melissa got Lyme’s disease from a tick in fifth grade and almost died. She was hospitalized for three months and has lifelong complications. An icy chill shoots up my spine. I do not need this right now. I need Dr. Google. Dr. Google, please help.

Brooke's story, along with others, will be published in a series over at Channillo starting in November. If you want a sneak peek, you can pull up "Dr. Google" in the Workshop.

Brooke Reynolds is a veterinarian from Charlotte, North Carolina. When not forced to read medical journals for work, she loves reading and writing fiction and has gained an appreciation for short stories. She also loves live music, cycling, beer, football, and exploring new activities with her husband and 2 crazy dogs.

Brian Asman, aka user Basma3nm, has a short story "The Sultry Sounds of Oingo Boingo" that will be published in the November issue of Double Feature magazine.

Brian Asman is a quality assurance manager at a genomics company by day and a short story writer by night/weekend/lunch break. Brian holds a degree in English from Mary Washington College in Fredericksburg, Virginia. When he’s not writing, Brian enjoys cycling, surfing, yoga, punk rock, and drinking bourbon barrel-aged beers. His literary influences include Thomas Ligotti, John Connolly, Garth Ennis, Kem Nunn, and John Kennedy Toole. Born and raised in Alexandria, Virginia, he now lives in San Diego, California with his Staffordshire Terrier, Emma. His work has been published in the anthology We've Been Trumped! and the forthcoming November issue of Double Feature magazine.

V.R. Stone, username also V.R. Stone, has published PsychoAnalysis, the first few chapters of which went through LitReactor's Workshop, and a few LitReactor regulars acted as the book's beta readers as well.

PsychoAnalysis is hot off the presses this month, and it's got a book trailer to boot:

V.R Stone is the author of psychological crime thriller PsychoAnalysis. The book is set in London, where he lives and works. He also holds a degree in Psychology.

V.R. has always buried himself in stories – films, books, TV – so it seemed natural to make up some of his own. The real world is boring, he'd rather live in the more exciting one that exists on screen or on the page!

That's it for this month. Everyone have a happy, healthy Halloween!

Damn. Good month! Congratulations Brooke Reynolds for winning that prize. How cool is that. Congratulations Brian Asman for publishing your story and congratulations V.R. Stone for your novel debut. Pretty nice. Have read, will read, and am reading in that order  these writers. Thank you Peter Derk for the column.

"October is the month when the rest of the world comes just a little closer to the strange side of the table."    My personal favorite sentence.

I'll look at the new contest. That last one is over my clever level, so I couldn't come up with a damn thing. I'll see if I can try this one. Thanks again, Peter. This column is important. Nice job. gsr

Thank you so much for guiding us with this. That we should not buy these kinds of houses for us. Because you said that somebody has been killed in it. And you can visit https://assignmentjunkie.co.uk/do-my-dissertation-for-me to get quality content for your thesis task easily. And now there is a danger in living it. Thanks for knowing us