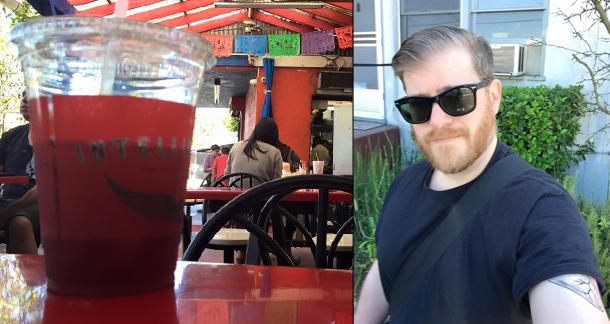 Please forgive the selfie indulgence in the banner. I couldn't help myself. But when I left New York, it was -10 degrees with the wind chill. And the first three stops on my tour—Portland, Seattle, San Francisco—were pretty comfortable in comparison, but Los Angeles was like magic. Sunny and 73 degrees. I was staying in my friend's apartment in Silver Lake, off Sunset, and I spent a day wandering around in a t-shirt, eating fish tacos, and drinking weather-appropriate iced coffees.

It was pretty great.

I've never been to Los Angeles before. I've never really been interested in going. Outside of the Hollywood sign, I had no idea what there even was to see. But now I understand why people live there. I'm sure it's hell in the summer, but it's a nice way to spend a February day. Especially given the brutality of New York winters.

The whole day was just about perfect. Nice weather, good food, and a hell of a Noir at the Bar reading to round out my first book tour.

I knew Los Angeles was a big city, stretched out over vast and differing neighborhoods. As the plane cruised in to land I was blown away by the sprawl. LA is big. Intimidating big. A friend from New York, Dan Romer (a supremely talented musician who did the score for Beasts of No Nation, among other films), had offered me his apartment while he was out of town. So at least I had a place to stay. I was lucky that James Queally, another pal from back home, was around and free all weekend, because without a local guide, I don't know what I would have done with myself.

He took me a taco truck where I got a great cabeza burrito, then to The Last Bookstore (where we ran into LitReactor class facilitator Emma Clark before she left for the day). Then: A quiet dinner with Eric Beetner and Owen Laukkanen, to celebrate Owen's birthday.

It was a nice Italian restaurant in Pacific Palisades, which to someone who is familiar with LA, that will probably mean something. All I know is it took us a while to get there. The food was fantastic, though it highlighted a difference between New York and LA cuisine: In New York, when you order chicken parm in a red-sauce joint, you get a piece of chicken the size of a hubcap. Here, it was a reasonably sized piece, like a normal human should eat.

Not that I was disappointed. The food was great, and it was nice to break the cycle of burgers and burritos.

Though, the next day, I made sure to get my fill. I grabbed two fish tacos at Tacos Delta, down the block from my friend's apartment, and it blew every other fish taco I've ever had out of the water. After eating I wandered down the block to get an iced coffee—iced coffee being how I mark the change in seasons, so this was a real treat—and realized I could just go back and get more fish tacos.

So I did. They were really good fish tacos.

The fifth and final event of my tour was a Noir at the Bar reading at the Mandrake Bar. I was sharing a bill with Eric, the organizer, as well as fellow Polis author Patricia Abbott, along with Johnny Shaw, Tom Pitts, and SW Lauden. And Owen—we'd now be hearing each other's readings for the third time.

Mysterious Galaxy Bookstore, which is located in San Diego but has a distribution center closer to LA, sold books at the event, so it was nice to see New Yorked and City of Rose on the table when I walked in. Even nicer to sell a bunch of each (and give me an excuse to load down my luggage a little more).

This is the best Noir scenario—having a bookseller on hand. Which isn't always possible, obviously. And it's why I always go to these with bookmarks, because someone might like your reading and then never remember your name, or the title of your book. So it's good to give them something that will remind them. Even better if they can buy it right there.

It was a good reading. Everyone did great, for one, but also, I had met every single reader previously. I knew a whole bunch of people in the audience. Our other class facilitator, Renee Pickup, came out, along with LitReactor overlord and Hollywood hotshot Dennis Widmyer, and longtime LitReactor member Dino Parenti.

I've made mention through some of these entries about how the road can get a little lonely, and how nice it is to have something familiar. So the reading couldn't have been more perfect.

And when it was over, I felt a weight was lifted off me. Not a bad one, but still, there's a lot of pressure when you're running down an unfamiliar coast, hoping people will come see you and buy your book and you won't lose your luggage or get lost or get sick or wake up in a tub with a kidney missing.

It was nice to be done.

Driving away from the Mandrake, I was struck by two feelings: The big one, obviously, was how excited I was to go home and see my wife and my daughter.

But I was also a little bummed. I feel incredibly lucky—not just being able to visit different cities, but to see so many friends and make good connections and sell some copies of the book. I didn't really want to stay on the road any longer, but I was happy to have had the experience and was looking forward to the next time I had the opportunity to do it.

Because book three comes out in October. And a couple of bookstores in other cities have expressed interest...

For my last night I stayed in an airport hotel—with my flight leaving at 7:30 a.m., it seemed easier than trying to get all the way across LA at 5 in the morning. James took me to In-N-Out Burger, because there's an unwritten law that New Yorkers have to stop in In-N-Out before they can leave California.

And then it was home. I landed just in time to get home, drop my stuff, and pick up my daughter from day care. She was pretty excited to see me.

In terms of raw dollars and cents, no fucking way! I just checked the credit card I put my business expenses on, and while I may have sold a bunch of books... I did not sell that many books.

But that wasn't really the point.

I met some booksellers, and some new potential readers. I got to write about the experience here. I got to meet other writers, and listen to them, and learn stuff. I got to see friends who I rarely get to see. I got some fun stories and ate some good food and bought some new books. The guy who literally inspired me to do this came out and bought my book.

A writing career is a long game. The trip may not have been cheap, but I think it was a worthy investment in my future.

Dino Parenti from Los Angeles is reading Everything He Gets His Hands On February 25, 2016 - 8:13am

It was good meeting you, and the readings were a hoot!  If Rob and his motley crew of crime scribes hits your town in the future, get your butts over to those readings!

It was nice reading these travel journals. Thanks for sharing your experience on the tour. I got my copy of City of Rose in the mail last week. Pretty excited to read it, but I will have to wait until spring break (3 more weeks!....but whose counting.....) My desk at work has towering piles of student papers that need to be graded. Yuck! Have a great weekend.