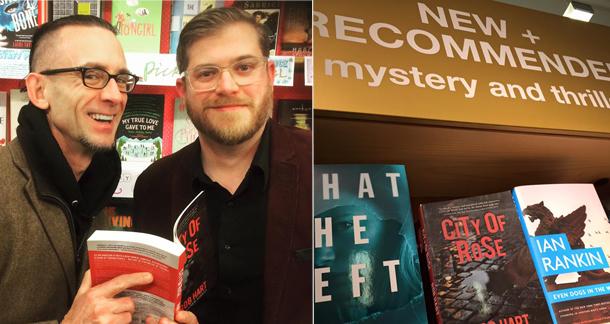 Sitting in my hotel room in Portland on Monday, waiting to leave for my signing at Powell’s, I was a bundle of nerves. I always get like that before any book or reading event. Light-headed and pukey. This was worse than usual: It was my first solo event outside New York City. It was at a bookstore chain that I’ve loved for a very long time.

And Chuck Palahniuk was going to be there.

Survivor is the book that made me want to be a writer. I’ve always been a big reader, but that was the first novel that made me say, “Holy shit, books can do this?” I’ve been lucky enough to meet him a few times and work with him through LitReactor. I was mostly being polite when I invited him. I didn’t expect the e-mail I got back moments later, that’d he’d be there.

So the day of, after getting lunch with my agent, I buckled down in my room and figured I would get some work done. But I couldn’t concentrate, so I watched reruns of Better Call Saul until it was time to go.

I landed in Portland late Saturday night, because I wanted a full day in Portland where I didn't have any obligations. And Sunday was a damn fine day. I got a cabeza burrito from King Burrito (one of my favorite things to eat in the whole wide world). I checked out a coffee shop where Monica Drake and her publisher at Future Tense, Kevin Sampsell, where hosting a get-together for Monica's new short story collection, The Folly of Loving Life.

From there I walked over the Burnside Bridge to Powell’s, where I found my books face out on four different shelves. After having been in that store so many times, and it being such an incredible landmark for books—that was surreal. It was one of the first things I saw when I walked in. Real talk: I teared up a little.

After that I spent most of the day with J. David Osborne and his wife Rios de la Luz (both very talented writers, and J. also runs Broken River Books), as well as my agent, Bree Ogden. I’m not going to say me and J. ended a very long night of drinking at a strip club that was hosting Stripperoake because my mom is probably reading this. Haha kidding that’s totally how we ended the night.

On a whole, it was a good first day. No nerves yet. Just enjoying the weather (mid-50s, compared to the subzero temps I left behind in New York). I also gave away a lot of bookmarks. Like, a lot.

It’s really important, whenever you’re out and about, but especially on tour, to have something you can give away with your name and information. Business cards are nice. I like bookmarks because they feel slightly less formal and slightly more useful (they’re great for holding places in books, I have heard).

Funny thing is: I hand out more outside of the events I’m doing. People outside New York City are so damn chatty. Cab drivers and bartenders and food servers, asking me why I'm in town. So I would tell them book tour, and they would ask what I wrote, and then BAM, bookmark. Because no way are they going to remember the title or my name. I don’t leave the hotel without a handful in my pocket, even if I’m grabbing some food.

They’re also good to leave in the pouches on plane seats.

I signed at the Powell’s location on Hawthorne. The final fifteen minutes before it started were the worst: That's when I was standing by the door, hoping every time it opened it was someone I knew, or someone who was just coming to the event. In the end I think I got a little more than a dozen people.

In addition to Chuck, Suzy Vitello and Chelsea Cain came out. And Johnny Shaw, and J. and Rios. And Taylour Houston from LitReactor! Bree was there, and it was the first book event of mine she’s been able to attend, so of course like an asshole I forgot to thank her in my opening remarks, so I had to remind myself to do it after the story I read. And my friend Kirsten, who gave me a hand on some Portland research stuff. So it was a familiar crowd, and that was a big help.

The best part: There were a few people in the audience I didn’t know.

I passed on reading a bit from the book. I'm generally not a big fan of that—I figure the people who are coming will buy it. Plus, the book doesn't have the cadence of a live reading piece. Still, I brought a copy of the book, as well as a short story ("Confessions of a Taco Truck Owner", which usually gets a good reaction from the audience).

Before the event I grabbed dinner with Chuck and Suzy and asked them for their input. They were both in favor of the story: It's a little something extra for the crowd that they wouldn't get from the book. Chuck said he reads stories to test new material—it gives you a chance to see where and how the audience reacts.

Chelsea had a different take on it, which we talked about after the event. She thought it’d be better to read from the book, because that's the thing I was selling, and she felt the character's voice would really grab people. I promised her I'd read a bit at the next bookstore event.

The whole thing passed in a blur. It was a good event. I sold some books, read a fun story, answered some questions, had a good time with the folks from Powell's. I felt comfortable, even though it was intimidating to have authors like Chuck and Chelsea and Suzy and J. and Johnny in the audience, all of whom I admire. And the guy at Powell's who set it up invited me back to read again. To my mind, that's the biggest measure of success.

Once it was done, standing out on the sidewalk, the night warm enough I didn't need a jacket, looking down the quiet street and taking a deep breath before moving on to a bar—I felt good. All those nerves just dissipated like mist.

Really, I made one big mistake: A guy named Benjamin, who found me through LitReactor and asked some great questions, later asked if I could read some short stories of his. Of course I said yes: I've been helped along by writers who very generously offered me their time and advice. I am awed and humbled to be on the other side of that, and I want to help where I can.

So of course, like a dummy, I left the stories on the podium.

Benjamin—I sent you a private message through the site. If you're reading this, hit me up, brother. I'm excited to read your stuff.

I’m writing this from Seattle, my second stop on the tour. More on that soon.

But, as I was sitting in the Portland airport, waiting to fly out, I was struck by a different set of nerves. In Portland, I had friends. People I knew in the audience. In Seattle, I had a reading and a signing lined up—and most of the people I would be interacting with, I'd never met in person. Johnny and Owen Laukkanen would be there, sure, but this would be the first stop where a lot of the success would rely on my ability to interact with people I don't know. Which I'm not always great at.

Check back soon to see how it works out.

And if you have any questions or comments about the book tour experience, hit me up in the comments!

It was great to see you in Portlandia! Best of luck with the rest of the tour!