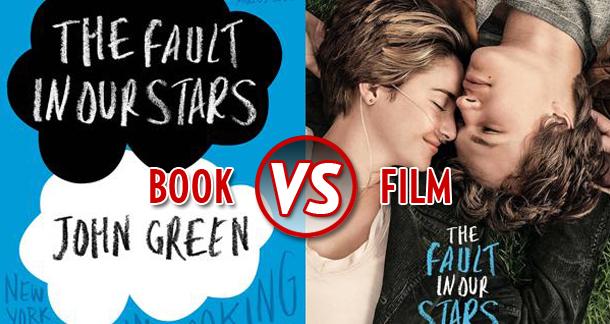 So here we are again with another book-to-film adaptation, and another examination of the before-and-after. What have we learned about this inevitable Hollywood process? Well, that authors should perhaps have limited involvement with the adaptation (The Shining); that adaptations can make authors disown their own books (and that violence isn't easily translatable) (A Clockwork Orange); that a movie can turn out better than its source material (Jurassic Park), and that an adaptation can still be good despite bearing little resemblance to the source material (World War Z).

But with The Fault in Our Stars, we have the opportunity to bring a new discussion to the table: rabid fandom, and how to appease it.

Sure, there are diehard fans behind just about every piece of literature, but none so fervent as those devoted to John Green's coming-of-age tale about two "star-crossed cancer kids" (at least among the novels covered in the Book Vs. Film sphere, which does not include LOTR, A Song of Fire and Ice/GoT, Harry Potter, or Anne Rice's The Vampire Chronicles, etc.). When I saw The Fault in Our Stars over the weekend, there were clusters of people throughout the theater quoting along and applauding at particular moments (the first exchange of "Okays" between Hazel and Augustus, for example). There are numerous Facebook pages, Tumblr and Blogspot blogs, and websites devoted to TFIOS, an acronym that also serves as the Twitter hashtag, which fans use to express their undying love of Green's work. Speaking of the tweety-bird social media platform, the official movie feed boasts nearly 500,000 followers, while Green himself sports an impressive 2.5 million. Oh, and of course, there's fanfiction.

I think the reason this adaptation feels so faithful boils down to the casting. Every actor, even those playing small roles, are fantastic.

Clearly, this is significant cultural phenomenon, so naturally, the fans are protective, a fact Green admires in his avid readers. In an article from the New York Times by Brooke Barnes, the screenwriters behind the TFIOS adaptation, Michael H. Weber and Scott Neustadter, "said they have had threats on social media warning them not to leave out various details of the story." For their part, Weber and Neustadter wanted to remain faithful to the book, and so far, fan reaction to the film has been pretty positive. I saw those reactions first hand, and the TFIOS hashtag has been lighting up with praise all weekend long.

So what's the secret to their success?

For starters, the screenwriters and director Josh Boone made a near carbon-copy of Green's novel. Obviously, some subplots and moments had to be jettisoned/rearranged to fit a two-hour film—changes you can read all about over at HuffPo, if you're so inclined—and, as noted by two very hardcore fans in New York City, there was a noticeable watering-down of the dialogue and the deeper philosophical elements discussed in Green's work; but overall, watching the adaptation, I felt in some ways I was re-reading the novel.

More so than an adherence to Green's basic plot, I think the reason this adaptation feels so faithful boils down to the casting. Every actor, even those playing small roles, are fantastic (I'm looking at you, Laura Dern and Willem Dafoe), but none more so than the two leads. Shailene Woodley as Hazel balances spitfire intellectualism and teary vulnerability with ease, and I think she perfectly embodies the character. And one would hope so: according to Entertainment Weekly, the actress fought hard to win the part, going so far as to write "impassioned" letters to John Green and director Boone. Though the latter had trouble envisioning Woodley in the part, after she auditioned and brought the entire room to tears, there was no one else he could see as Hazel.

Upon seeing the trailer, I was iffy on the kid playing Augustus, Ansel Elgort, but that's mainly because the trailer plays like a Nicholas Sparks adaptation, and thus focuses solely on the actor's good looks and the character's romantic nature. But when Elgort's Augustus first appears onscreen and, as a result of trying too hard to look cool, runs into a doorway (making a fool of himself), I was convinced this Augustus would be the character Green gave us—a former-athlete-turned-nerd, who puts on a suave act, but is a total goofball deep down.

As EW reports, at Woodley's insistence, Elgort read the book before auditioning, and became just as obsessed with the material as she was. So not only do we have two writers and a director who are committed to doing the novel justice, we also have two confirmed "Nerdfighters" (the name given to Green fans) playing the lead roles. Simply put, this was a passion-project for all parties involved, and it shows. 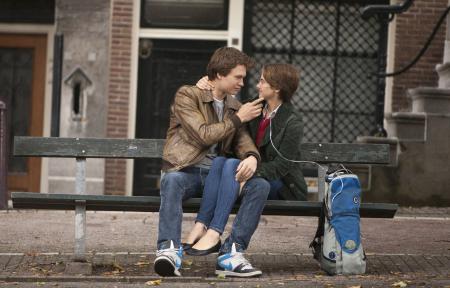 And yet, as close to the source material as the filmmakers stayed, the movie version of The Fault in Our Stars is also a separate entity, mostly for the tonal change of the last thirty-odd minutes, which contrasts itself not greatly but certainly noticeably from the book. For those of you that have zero exposure to the narrative in either incarnation, it is revealed toward the climax that (SPOILER) Augustus's cancer has returned after several years of remission; and not only this, that his entire body "lit up like a Christmas tree" during a PET scan. In the book, Green follows this revelation with a daunting sequence in which Augustus slowly succumbs to his illness—and I do mean slowly, as the author takes us through every horrible moment with the brutal honesty of a Vulcan. We see Augustus's embarrassment over wetting his bed, his wild mood swings from despondency to meanness, his ever-weakening body, his loss of color and weight; all of which culminates in a particularly awful scene at a gas station at three in the morning, in which the character suffers an infected feeding tube wound and alternates between sobs of despair and throwing up on himself. It's difficult to get through, but it is truthful, and it will resonate with anyone who has seen a love one die from cancer.

While the film sticks with the cancer reveal, it shies away from the ugly truth that Green lays down. Only the gas station scene makes the transition, and even then, it isn't nearly as gut-wrenching. This was a pointed move on the part of screenwriters Weber and Neustadter, who felt the novel's honesty would be too much onscreen. From the aforementioned Times article:

'You can put a book down anytime and take an emotional break, but you can't do that with a movie,' Mr. Neustadter said. 'The end needed to be a little less bleak. We're allergic to happy endings, but we'll always go for the hopeful one.'

While I disagree that Green's third act is "bleak," and therefore not hopeful, I do think the screenwriters made the right call here. As Meredith Borders suggested in her BvF on A Clockwork Orange, seeing something can be harder than reading about it, no matter how evocative the language may be; and even if it's true that The Fault in Our Stars is nothing more than emotional manipulation designed to make you soak your hankies (a criticism I don't align with in the slightest), it's certainly not meant to disturb or disgust, particularly if you consider that a large portion of the fanbase are teens themselves. Besides, thanks to Woodley and Elgort's thoroughly committed performances, this lack of visually "gory" details doesn't rob the narrative of its emotional weight. Hence, though ostensibly different, both third acts accomplish the same goal, and the film remains faithful to the book.

Is there any point in seeing the movie?

Good question. If this screen adaptation is almost tantamount to reading the book, can it be argued that it is an altogether pointless viewing experience?

One could argue that, but they'd be wrong, for the simple fact that (and I've made this point before), films and books are separate mediums, each with their own merits to offer. In the case of TFIOS: The Movie, I'd say the performances are the biggest draw. There just isn't a bad actor in the bunch—even the dude playing the Dutch waiter is Oscar-worthy, and he has maybe three lines. Check the picture out for this reason alone, if you don't have any others.

Should I skip the book?

So what's your take? Are you a hardcore Nerdfighter who adores this book? Or at the very least, have you read it, and did you enjoy it? Either way, did the movie meet your expectations? If not, why?

Book vs. Film(s): 'Invasion of the Body Snatchers'

I'm sure the book itself is fine, but rabid fans need to take a step back a little. Take a chill pill,  and then talk objectively about the movie or book.:/

I might end up seeing the movie that, just to see what the heck contemporary is exactly. (That genre has always been something that's confused me.)

I like both. The movie was well done and faithful to the spirit of the book. It isn't my favorite of his books, but I do love it. Several of my students were hardcore fans of the book, and they were pleased with the movie. I wanted to say more, but I can't put it into words. I just keep thinking about Esther Earl. She's been on my mind since I went to see the movie.