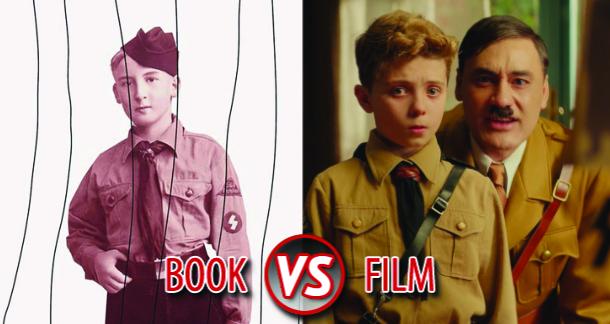 Who would have thought that a film featuring a young boy whose imaginary friend is Adolf Hitler would be nominated for six Academy Awards, including best picture? Moreover, would anyone have figured that said movie would be a heartwarming coming-of-age narrative that is as sweet and endearing as it is darkly comedic (and sometimes downright dark)? Probably few people, but as this is now the year two thousand and twenty, very little should surprise us anymore. And in fact, Jojo Rabbit, the film in question, is exactly the kind of story we need in this day and age, a story that shows us just how juvenile and ridiculous hatred is, and one that depicts Hitler as a bumbling prima-donna.

Waititi's narrative reaches for the light, while Leunens's prefers the dark.

One person who definitely did not predict a movie like Jojo Rabbit is Christine Leunens, who wrote the novel Caging Skies, upon which the film is based. Written for the screen and directed by Taika Waititi, Jojo Rabbit bears only the most passing resemblance to its literary predecessor, its DNA more closely related to Waititi's previous films, the charmingly goofy What We Do In The Shadows and Thor: Ragnorak—which is not to say Jojo isn't a drama at heart, just that it's a wickedly funny one. By contrast, Leunens's book is dark, nay, stygian, exploration of obsession, masculinity, societal norms, and of course, hatred. There is nothing funny about it, or nothing much anyway. It's a bit like Nabokov's Lolita, set against the backdrop of the Holocaust. Its lack of cheeriness, however, isn't a bad thing, just something for which readers should prepare themselves, especially if you're expecting the novel to resemble the film.

The book and film share the same basic premise: Johannes, a ten year-old boy (played in the film by Roman Griffin Davis), becomes enamored with the figure and beliefs of Adolf Hitler during the rise and eventual fall of the Third Reich. After suffering a debilitating injury that renders him unable to fight in the war, Johannes spends most of his free time indoors, whereby he discovers that his mother (Scarlett Johansson) is not only a member of the anti-Nazi resistance, but she is also hiding a teenage Jewish girl, Elsa (Thomasin McKenzie), in a crawlspace inside their home. While initially repulsed by Elsa's presence, Johannes ultimately befriends the girl, and even develops a crush on her. 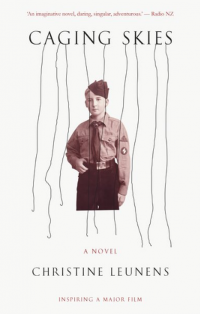 It is here that the two narratives diverge. In Waititi's take, Johannes remains a boy throughout, and learns to let go of his nationalistic hate through his relationship with Elsa; she in turn is a defiant spitfire who refuses to be victimized, even in her abject imprisonment, and it is this fierce determination to survive that helps Johannes see Elsa as a person and not a "thing." This allows him to finally reject Hitler's ideologies in full (represented physically by the specter of the Führer himself, played by Waititi). But the dynamic between Johannes and Elsa in Leunens's novel is much different, and their relationship is influenced by three significant factors:

One, the change in titles. Waititi's film gets its name from the derogatory nickname Johannes's superiors in the Hitler Youth give him, after the boy is unable to kill a rabbit to prove his manhood. He is thus identified as a "sissy," too weak and sensitive to be a true Nazi soldier (and his subsequent injury from a dynamite blast seals his "invalid" status). But there is no scene revealing Johannes's "weakness" in the book; in fact, the author briefly mentions the Hitler Youth members hunting and eating a hare during their training. It's an afterthought, this killing of another living being, and thus Johannes experiences no emotional upheaval.

Two, the appearance of Hitler himself. The buffoon as played by Waititi does not appear in Leunens's novel, nor in any imaginary formation. Though Johannes does feel disillusioned about the failure of the Third Reich and Hitler's suicide, he never fully sees the man for what he is, and thus never rejects him as he does in Jojo Rabbit. Instead, the ideologies that guided Johannes throughout his boyhood experiences linger into his adult life. In this way, Leunens isn't just interested in exploring the clear falsehoods in Nazi rhetoric, but also in traditional and nationalistic viewpoints as well; in doing so, the author reveals how the Third Reich in all its hateful glory came to be, how it appealed to thousands upon thousands of people, and the lasting effect it had on those who supported it or, at best, abided it. In other words, Leunens's scope goes well beyond the specific (Nazism) and encompasses more universal considerations, skewering not only pre- and post-World War II Europe, but more modern societal ills as well.

This leads us to the third consideration, the fact that Johannes, in a gambit to keep the girl in his life, lies to Elsa when the war ends and tells her the Axis forces won. Waititi's Jojo and Leunens's Johannes both commit this act of deceit, but it plays out as a childish, temporary "hail Mary" in the film, while in the novel it is far worse and deeply unsettling, given that the character is nineteen, and not ten, when he tells the lie, and that Johannes keeps up the ruse for another three years. His love for Elsa, in this instance, isn't an innocent, boyhood crush, but a full-blown narcissistic obsession, made worse by the fact that he believes he is owed her requited love, that because he looks after her, feeds her and provides for her, she should return rather than rebuff his advances. These sentiments are of course echoed by the beliefs of Incels and "men's rights" activists, who insist their "chivalry" and "goodness" should be rewarded with affection and adoration from the opposite sex, both romantically and sexually. (That the views of Incels and MRAs have been comfortably co-opted by the "alt-right," AKA, the white supremacists and Neo-Nazis, should surprise no one.) 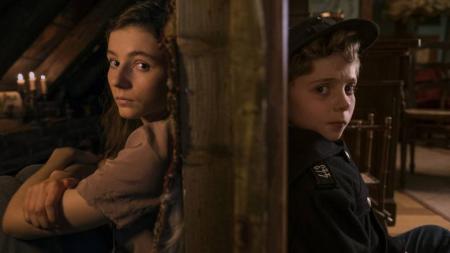 Even Johannes recognizes his status as a dinosaur with beliefs that are antiquated compared to more modern and freer ways of thinking. And this seems to be the crux of Leunens's psychologically dense novel: that old fashioned customs lead only to isolation and crippling loneliness (Johannes, by the end of the narrative, literally ends up bricked in within the walls of his own apartment). Conversely, Waititi's ultimate message is more or less the same, but arrived-at from a different angle. Hitler's lonely death by suicide, his narcissistic obsessiveness, represents the pathetic nadir of Third Reich idealogy. When Jojo rejects Hitler (by kicking him in the nuts and blasting him through a window, no less) and frees Elsa from the crawlspace, he chooses the opposite path, one that leads to modern notions of inclusivity, togetherness, and love. In other words, Waititi's narrative reaches for the light, while Leunens's prefers the dark.

Neither approach to this type of story is superior to the other, and in fact, we need both representations at this moment in time, explorations of light and dark in equal measures. In this way, Caging Skies and Jojo Rabbit are perfect companions and best ingested within close proximity to each other.

Made an account just to say I absolutely loved this column, especially the little message in the end. We need both sides of the story, and they do complement one another. I think this is perfectly shown by the fact that Jojo Rabbit garnered just as much attention as the beyond dark Parasite during award show season. But I will say it is refreshing to see a director take the road less traveled when exploring such heavy subjects, I feel the same “we can do the right thing” spirit that Once Upon a Time In Hollywood has.

Made an account just to say I absolutely loved this column, especially the little message in the end. We need both sides of the story, and they do complement one another. I think this is perfectly shown by the fact that Jojo Rabbit garnered just as much attention as the beyond dark Parasite during award show season. But I will say it is refreshing to see a director take the road less traveled when exploring such heavy subjects, I feel the same “we can do the right thing” spirit that Once Upon a Time In Hollywood has.

I have heard about this film too, but still haven`t watched. I am looking for some good films about war. By the way, wanna ask. Do you get more assignments on distance study than on traditional? My group does. I am trying to deal with it using https://gradesfixer.com/free-essay-examples/sports/ services like this, what are your tips? I am just preparing for my practice as a teacher for kids. So, there are some free essay examples with little sport tips for a group, maybe you can advise me on some resources too? What about book vs film, I prefer book)

An essay is a piece of academic study and most boring of it. And of course you not always have time and inspiration on this because your understanding of a topic can be not enough? What if you make a mistake and need to rewrite? https://legitwritingservices.com/best-essay-writing-services-on-yahoo-answers/  get 5% discount.Put all possible problems and rewriting on a team of professionals.