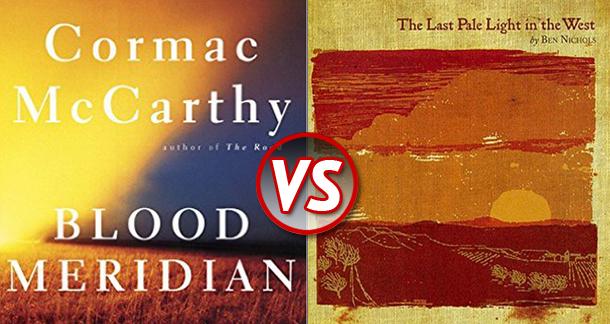 In 2009, Ben Nichols, frontman for rock/southern alt-country outfit Lucero, put out a short album titled The Last Pale Light In The West, featuring tracks based on McCarthy's book.

How does the album compare to the source material? And can an album ever be a worthy adaptation of a book?

For McCarthy, Blood Meridian was a bit of a departure from his formula at the time. Rather than writing with an Appalachian setting, McCarthy moved his story to the Southwest and into Mexico, settings that would serve him well for his upcoming Border Trilogy. Blood Meridian was also a novel he worked on while living off of the MacArthur grant he was awarded in 1981. Y'know, that grant they call a "genius" grant.

For Nichols, The Last Pale Light In The West was also a departure. He explains in an interview with NPR:

I've always found that, basing the songs on things I have firsthand knowledge of, it was easier to make the songs ring true. When I've tried to just make stuff up out of thin air, you can tell. It doesn't have the sincerity...It was nice to have [the Blood Meridian] material to go back to. I think I was able to ... find the same kind of sincerity in these songs that I'm able to do with songs about myself, just because the book made such a big impact on me, and it was always there to reference. I think the songs came out in a very honest way.

Blood Meridian has a dark, unforgiving tone. I was trying to describe McCarthy's books to someone, the central feelings. And I almost said "perseverance," but that seemed too positive. Too much silver lining.

For me, McCarthy's books feel like they all speak about the moment before we got to where we are today. We live in a time where human life has value, and it's strange to be reminded that this was not always the case.

Violence plays a big role in building this feeling. McCarthy's violence is always unexpected, brutal, and very often pointless. By which I mean the violence doesn't exist to move the plot, and it rarely represents a showdown between good and evil. It feels random, like a force that exists and just so happens to be pointed in one direction or another.

Nichols captures this hard-to-describe tone in a few different ways over the course of 7 songs, but the rawness of the first track, "The Last Pale Light In The West," probably does it best. There's an ominous feeling to the opening, and a stark bleakness that bleeds into the next song, "The Kid." Some of the tracks feel more Blood Meridian than others, but Nichols definitely nails down something hard to hit in the first track.

Each track after the self-titled opener on The Last Pale Light In The West is named for a character in Blood Meridian. There are two in particular I want to talk about.

The Kid is a central character in Blood Meridian, maybe the closest thing the book has to a hero. He leaves home in his early teens and falls in with various groups of murderers who are scalping Native Americans for cash.

The song "The Kid" is probably the most direct in terms of describing the character as set forth in the book. The song really does capture a certain sorrowful, fatalistic quality. It feels a lot like another Lucero track, "The War," which is based on the experiences of Nichols' grandfather in WWII.

The character track "Tobin" is Tobin's recounting of his encounter with The Judge. Lyrics:

What really comes through in the songs is that, although they're ostensibly named for different people in the book, The Judge is a specter that haunts every line. He's as inescapable in the album as he is in the book. The tracks really do serve their named inspirations, and The Judge ties things together on the album just as he does in the book. 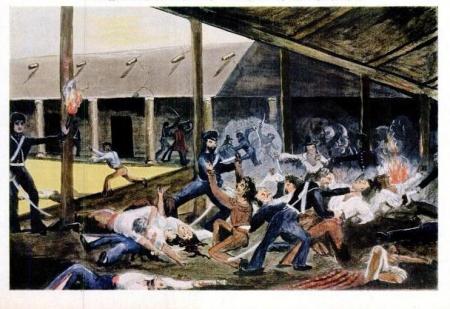 McCarthy's book has a strong base in the real-life exploits of the Glanton Gang, a group of mercenaries hired to kill Apache in Mexico.

As McCarthy puts it:

The ugly fact is books are made out of books. The novel depends for its life on the novels that have been written.

Many portions of Blood Meridian are based on My Confession: The Recollections of a Rogue by Samuel Chamberlain, a member of the Glanton Gang. McCarthy did some heavy research, and critics have noted that even small, unimportant interactions and pieces of the book are based on historical material.

Nichols' source material is McCarthy's material, which means it's a third-hand story. It takes a lot directly from the book.

If you look at the lines quoted above:

You can find their source in Blood Meridian:

For the earth is a globe in the void and truth there's no up nor down to it and there's men in this company besides myself seen little cloven hoof prints in the stone...

While the book is a strong source of raw material, Nichols moves things around, telling the story in a different order, and even taking lines regarding one character and applying them to another. He also does some trickery, seemingly using The Judge to narrate "The Kid," which is not how things go down in the book.

I love Cormac McCarthy's books dearly. Let me be clear about that upfront. I think they're near to perfect.

That said, they aren't the most accessible pieces. McCarthy doesn't care much for punctuation, and his dialog isn't set off in quotes. It's a testament to his skill that it works so often, that when you read, you can feel where the dialog starts and stops. But this, combined with the never-translated Spanish peppered throughout Blood Meridian, do make it a read that, though great, feels a little bit like, well, school.

Nichols' album is supremely accessible. It's just under 30 minutes, and you get a quick, but mostly spoiler-free outline of the book in that time. It's like Cliff's Notes if Cliff's Notes had some emotional punch and made you really, really want to be drunk next to a campfire.

Comparison To Other Works 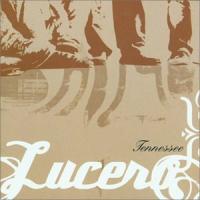 Nichols got back with the band after The Last Pale Light In The West, putting out the full-length 1372 Overton Park, which is just wall-to-wall great shit. Women and Work followed, and it's grown to be a personal favorite of mine at times.

What you have to know and understand about Lucero is that they're a band. Which means fans have STRONG opinions about which era is best. Are you someone who loves Tennessee? Someone who caught on with their more western-y That Much Further West? Or maybe the more punk/rock-oriented Nobody's Darlings?

What's most notable about The Last Pale Light In The West might be that it's basically a solo record, but it's not polarizing like so many other attempts by a frontman to go it alone. Fans love it, and it's experienced similar success to Lucero's bigger albums.

The Last Pale Light In The West: TLPLITW. A bit long.

Blood Meridian: BM. Which is commonly associated with "bowel movement."

BM: Depending on reading speed, 6+ hours.

TLPLITW: Many covers are available on YouTube, some not bad.

BM: Eeesh. Is there anything worse than a bad McCarthy ripoff?

Who Would Win In A Fistfight?

Nichols: Much younger, but a wiry dude.

McCarthy: Much older, but it feels like his type always have one solid punch left in them.

It's stacking the deck to compare a huge, canonical classic of American Literature to an indie album that's 27 minutes long. Of course the book has more impact. But I'll say this of the album: this is the best transfer of Blood Meridian to a different format that exists, and I'll be floored if we ever see a better one.

I'll also say something else. If you haven't read Blood Meridian yet, I highly recommend it. And if you haven't read it yet, I HIGHLY recommend listening to The Last Pale Light In The West first. It's the perfect setup to read the book, like a better version of the inside flap that tells you just enough of the story. The hardest thing about reading a McCarthy novel is getting your bearings in the first few pages. Let Ben Nichols be your navigator. You won't regret it.

I know there are other albums based on books out there. Which ones do you dig? Which ones suck?

I met Ben Nichols in Winston Salem, NC before a show and after I had had one or two. I am a big fan of Lucero. There were so many things that I might have said to him, starting with hello, but instead I blurted out: "Cormac McCarthy is my favorite author." He waited for more from me. Nothing came. He finally grinned and signed my hat.