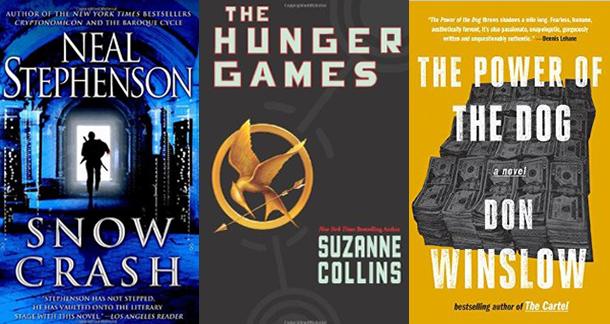 Action is hard to write. What works so well on the screen, with the full visceral impact of celluloid, can appear rote and stagnant on the page. Imagine a sword fight in prose. Do you describe every parry and thrust? And if so, at what point does it devolve into the equivalent of a VCR user manual?

One sure-fire way to inject adrenaline into your words is to write in the present tense. This is a method that is rare in the literary world, as it’s offputting in its immediacy and begs the question: if this is happening right now then how is the story being told?

So although this isn’t a common practice and went by the wayside after the 1980s, there are still a few books that utilize it to heighten mood and infuse an action scene with a bit of cinematic spectacle. Those include Neal Stephenson’s Snow Crash (1992), Charlie Huston’s Caught Stealing (2004), Don Winslow’s The Power of the Dog (2005), Suzanne Collin’s The Hunger Games (2008), and Chuck Wendig’s Star Wars: Aftermath (2015).

Each author is unique in their reasoning for this modus operandi. So for educational purposes a particular moment of high-octane intensity will be dissected from each, showing how authors can exploit this infrequent technique to maximum effect in their own animated way.

Snow Crash is, of course, Neal Stephenson's post-cyberpunk opus. Starring a sword-wielding hacker named Hiro Protagonist, this particular brouhaha sees our hero pursuing Raven, a murderous Aleut harpoon master, into a hop field. Raven has constructed a spear from a bamboo pole and a shard of glass:

He throws it fluidly. The motion is calm and beautiful. The spear disappears because it is coming straight at Hiro.

Hiro does not have time to adopt the proper stance, but this is fine since he has already adopted it. Whenever he has a katana in his hands he adopts it automatically, otherwise he fears that he may lose his balance and carelessly lop off one of his extremities. Feet parallel and pointed straight ahead, right foot in front of the left foot, katana held down at groin level like an extension of the phallus. Hiro raises the tip and slaps at the spear with the side of the blade, diverting it just enough; it goes into a slow sideways spin, the point missing Hiro just barely and entangling itself in a vine on Hiro's right.

This is a prime example of the author creating a clear space and controlling geography as well as all the moving pieces within it. Hiro is visualized in crisp, pointed sentences and his actions are blunt and simple. It's easy to picture, but there's enough left open for the reader to fill in the blanks.

Caught Stealing is Charlie Huston's first published novel and follows troubled everyman Hank Thompson, who in promising to take care of a friend's cat finds himself in a lot of trouble with the wrong side of the law. This particular scene sees an out-of-shape Hank running for his life down the streets of New York City, as told in first person:

I'm running west on 14th Street. Two lanes of traffic running both east and west, the sidewalk crowded with pedestrians checking out the discount shops. The bag from the store is in my left hand and, as I run, it swings crazily and keeps bouncing off the wound in my side and it's all I can think about. After the first twenty yards I drop it. With my hands free, I try to focus on my stride, try to find the point where I can slip my legs into gear and let them carry me along, but it's hard because I keep snapping my head over to the right to catch a glimpse of Red, to see how far back he is. He's not far back at all; in point of fact he's just about parallel to me, but he's sticking to the north side of the street and seems satisfied to just keep pace. I catch a break at Second Avenue, a green light that lets me shoot across the crosswalk and onto the next block.

I've written about Huston's style before with his Joe Pitt Case Files, and this earlier book is an easy comparison. The first-person perspective puts us right in the middle of Hank's heart-pounding flight of fear. Little tangible details like the bag banging his leg, actual locations like 14th Street, the distance he's run and the positioning of his pursuer on the block, along with the snapshots of the world around Hank, immerse us in this moment of desperation. 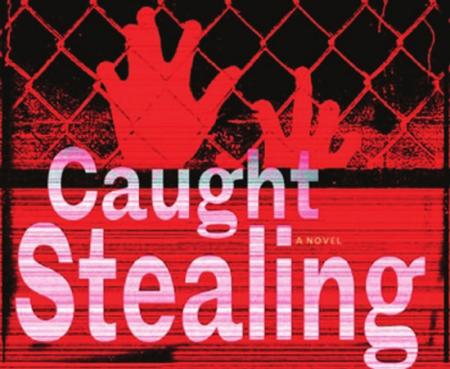 The Power of the Dog is Don Winslow's crime epic that balances many spinning plates in terms of characters and locations. Here Sean Callan, an Irish mobster, is getting a drink with his friend O-Bop when they are confronted by a local tough, Eddie "The Butcher" Friel:

"Come on," Callan says to Friel.

Friel turns on him.

"You want part of this, kid?" Eddie asks. "You need to decide who you're with, us or him."

"Him," Callan says as he pulls a .22 from under his shirt and shoots Eddie the Butcher twice in the forehead.

Eddie looks like he can't fucking believe what just happened. He just looks at Callan like What the fuck? And then folds up. He's lying on his back on the dirty floor when O-Bop takes the .38 from his hand, sticks it in Eddie's mouth, and starts jerking on the trigger.
O-Bop's crying and shrieking obscenities.

Everyone knows The Hunger Games. Suzanne Collins's trilogy has gone on to be four popular movies that launched Jennifer Lawrence into stardom. But back in 2008 there was just the first book, with Katniss Everdeen forced to fight other young people to the death in a computer-controlled battleground. Here the games have just begun, with her and her opponents in a ring around the Cornucopia:

And I've missed it! I've missed my chance! Because those extra couple of seconds I've lost by not being ready are enough to change my mind about going in. My feet shuffle for a moment, confused at the direction my brain wants to take and then I lunge forward, scoop up the sheet of plastic and a loaf of bread. The pickings are small and I'm so angry with Peeta for distracting me that I sprint in twenty yards to retrieve a bright orange backpack that could hold anything because I can't stand leaving with virtually nothing.

Similar to Huston, Collins utilizes the first-person perspective and thus rides the fine long of needing to communicate a story while also giving the narrator amazing lucidness and awareness in the midst of chaos. Again there's reference to distance, but Collins is also concerned with creating a sense of time, referencing how Katniss views the possibility of choice in the span of moments. Collins also pumps up her sentences with repeated use of exclamation points, in stark contrast to Huston's clammy cold sentences, exemplifying the anger her heroine feels at her circumstances.

The first book set after Return of the Jedi in the new expanded universe since Disney purchased Lucasfilm, Wendig's Aftermath is also the only Star Wars novel, in almost 40 years of the property, to be written in present tense. Just months after the destruction of the second Death Star, here is main character Norra Wexley's frantic fleeing from Imperial bogeys in hot pursuit and parallel flashback to the previous battle:

Everything, gone dizzy. Lights inside the cabin flashing. A rain of sparks from somewhere behind their chairs. Here in the Moth, everything feels balanced on the head of a pin. Through the glass, the planet. The clouds, coming closer. TIE fighters punching holes through them, vapor swirling behind them. She stands up, hands shaking.

Inside the bowls of the beast. Pipes and hissing steam. Skeletal beams and bundles of cord and conduit. The guts of the resurrected Death Star. The shields are down. This is their one chance. But the TIE fighters are everywhere. Coming up behind them, hawks nipping at their tail feathers. She knows where this goes: It means she's going to die.

Again the terse sentences lacking subjects hurtles the reader into the moment. There's a palpable sensation of claustrophobia as Norra's perspective on her close-quarter surroundings bludgeons the senses. We can feel the eyes darting back and forth leading to split-second decisions. This is perhaps the truest attempt at translating Star Wars, a pure audio-visual rollercoaster, into a medium that is generally more about quiet consideration.

Present tense isn't for everyone, reader or writer. It's jarring at first, and takes a bit of adjustment. It's about grabbing the audience and making them an active participant rather than a passive observer. That means emphasizing the sight, sound, touch and most importantly the physical, putting you in the shoes of the lead to the point of breaking a sweat.

How do you feel about present tense?