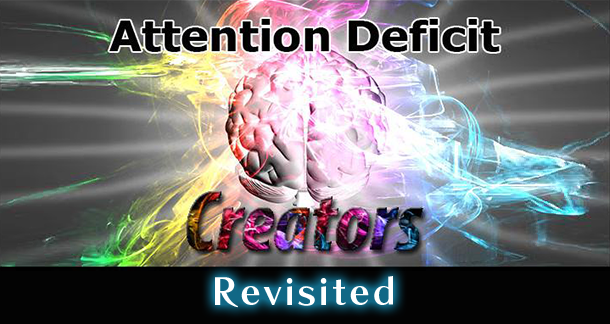 The struggles of ADD are often on my mind, at least while I'm not distracted by something shiny. The way my brain is configured has defined both the best and worst parts of my life, and its mixed relationship to creativity has been a challenge to navigate.

I wrote about ADD and creativity before, some seven years ago, and I still agree with almost everything I said there. In that article, I talk about what ADD is, why ADD people are often drawn to creative pursuits, famous people who likely had ADD—and I'm not going to re-tread that ground here. Instead, I want to focus on what the last seven years have taught me. Specifically, I want to discuss two long-term problems ADD can create for aspiring writers and the tools that have (however imperfectly) helped me face those problems.

The Two Deadly Spirals of ADD

I remember how excited I was about starting my first novel. I was nine years old, and back then Word Perfect was an all-blue screen with yellow-white text. I was drawn to the story again and again, and my daydreams were often about the project.

I didn't finish it, of course. Nor was it especially good. But I loved it. I dreamed of being a writer.

Over time, an ADD-associated trend can start to corrupt that emotional experience. As we start to define success as a writer more concretely, one element of ADD becomes an apparent hurdle: It is damn hard to sustain effort over a long period of time, no matter how excited we get about new projects at the beginning. Difficulty with sustained effort means difficulty following through which means difficulty ever launching a writing career. As more projects are abandoned, the writing folder can feel like a graveyard for once-loved stories.

So, I feel guilty. Maybe you do too. Sometimes I feel ashamed, ask myself why I can't seem to finish anything. And the negative emotions of guilt and shame and lowered self-regard become part and parcel with writing itself. This, in turn, makes it hard to get into the writing process at all—and, now that the passion isn't enough to put your ass in the writer's chair, executive dysfunction rears its ugly head and makes it harder still. And then that creates more negative emotions associated with writing, which in turn makes it more emotionally bogged down, etc., etc.

That's the first deadly spiral. The second is tied to it. As writing becomes more difficult, and projects just don't get finished, it's easy to have lowered self-efficacy beliefs. When you want to write and have ambitions to write, but you consistently watch yourself failing to actually write, it's easy to say, "maybe I just can't do this." Maybe I've been lying to myself this whole time.

Self-efficacy is a fascinating domain within motivational psychology, and its conclusions are diverse and complex. That said, here's the dramatically oversimplified crux of what we know: If you don't believe you can successfully do something, you have almost no chance of doing it.

The two dilemmas, then, are superficially about sustaining work and getting started when the writing feels difficult. But really, those aren't the problems: The problems are associating writing with negative emotions (guilt, shame, failure, low self-regard, etc.) and falling into a belief that you cannot succeed.

There are many issues that ADD creates for a writing life. The two I just noted, though, are the ones that feel like mortal threats to a writer's aspirations.

So, let's say that you are pulled into these downward spirals and want to get out. How do you do that? As always, I wish I had clear, simple solutions for you. What I have is a lot of experience in applying imperfect solutions. Over time, I've added a variety of approaches to my response toolkit, making it easier to overcome the struggles of executive dysfunction. And, for me, a solution isn't a failure if it doesn't work a lot of the time. Something like a 30% success rate feels awesome to me.

I try to think of it like this: Let's say you have a wonky router that makes you consistently lose internet access for no particular reason. Maybe you learn to reset the router, which is great solution when it works. But, because it doesn't always work, you learn how to do a full power cycle, how to reset your computer's IP config, how to position the router in ways that maximize signals, etc. No one solution works every time, and maybe sometimes the internet is just down, but having a variety of potential answers can still be helpful.

The more you can get yourself to write, the more your self-efficacy beliefs will improve and the more your associations will be about the experience of writing rather than all of the surrounding emotional baggage. So each of these tools are targeted, not at the overarching problem, but at getting into the writer's chair.

When you look at a project, it is easy to see the entirety of it, the broad scope and overwhelming minutia. For me, that leads to an emotional lock-down. One of the best ways to get out of it is to identify the first concrete step I have to do. It's not even a matter of committing to do it. It's just about narrowing the scope to a ludicrous extent.

So, an example. Let's say I want to work on a novel that's been on the backburner for a while. It feels huge, intimidating, I haven't touched it in months. But the first step is, I may think, to re-read the last bits I was working on. And then I can recognize that the first concrete step isn't even that: It's figuring out what I even WAS working on. And it isn't even that. It's pulling up the file on my computer so I can scan through the chapters and see if I can recognize where my last bit of work took place. This on its own is often enough to break through the barrier to the work.

2. Kaizen Writing Tasks on the Daily

It's exponentially more motivating to have outside accountability in comparison to being entirely self-motivated.

Kaizen is a Japanese term coined by an American. It means "wise movement," and it's about taking small but consistent steps to improve things. This, as with identifying the first concrete step, is about lowering the barrier to entry by making the task incredibly simple. I often do this with my dishes, for instance. The stack looks overwhelming, but can I wash five dishes? No? How about three? How about one? How about a spoon? The size of the task is less significant than the adjustment to the emotional experience. Once the task feels easy, then it's easy to get started. Once you get started, the momentum will often carry you from there.

I try to combine kaizen-style tasks with a consistent habit. It never ceases to amaze me how much my brain kicks into gear when I'm writing consistently. I get new ideas, my mind wanders through the story, and I get more and more excited about the work. The trick is that a daily writing habit can feel really onerous when looked at as a long-term goal.

In combination, the kaizen + consistency model means committing to very small chunks of writing. I'm allowed to exceed it but I have to get above the ludicrously-low barrier each day. If 20 minutes feels intimidating, I set the threshold at 15 minutes, or 10, or 5, or 2. In the past, when I've gotten on a roll with this, it's proven immensely effective for productivity.

If I'm still struggling to get into my work, I sometimes I use a strategy I call task bouncing. This is where I alternate between something I find it easy to get into (watching a TV show, playing a game) and doing something I'm resisting (grading, writing, etc.). I usually pre-determine how much of the enjoyable activity I'll do between each period of the resisted activity.

It's time-consuming. It's not great. But, when I'm really struggling to get going, it can break past that initial hurdle. So maybe I'll commit to writing a paragraph and then watching an episode of the Simpsons. What I find is that, as I break through the barrier, I want to write more than a paragraph, I want to watch less TV, and the work starts to feel more and more natural.

My MFA program gave me lots of deadlines that kept me motivated and writing. Another instance was when I got beta readers for a nearly-completed novel and promised them a set number of pages each week. Many writers I know swear by a weekly writing group.

I don't know about you, but for me, it's exponentially more motivating to have that outside accountability in comparison to being entirely self-motivated. So, if you can, get yourself into a partnership, group, or situation where you'll have that form of accountability.

I have a lot more strategies (a couple of which I cut from this article in an effort to me concise). However, I feel the above approaches have been fairly effective for me and are a good place to start. But what about you? What strategies have helped you get into the writing process? Whether you struggle with ADD or not, I'd love to hear your perspective.

Hitting Your Stride: 7 Tips for Higher Word Counts in 2015