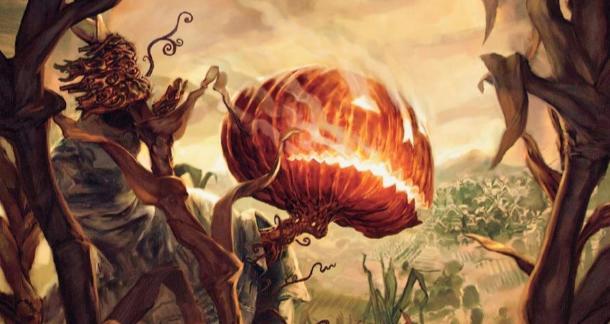 We all know about films set around October 31st: Halloween (1978) and its numerous sequels, all involving Michael Myers slaying teens on All Hallows Eve; Trick or Treat (1986), about a Satanic rock star planning his unholy comeback; Hocus Pocus (1993), the beloved family spooky movie starring Bette Midler and Sarah Jessica Parker; and Trick 'r Treat (2007), an anthology film connected by the spirit of the season, a little rascal named Sam, just to name a few.

The list of Halloween-themed films goes on and on, many of which are household favorites. But while the number of Halloween poems, short stories and novels is just as robust, these titles aren't as widely known or cherished—a shame, since there are numerous high quality texts just waiting to scare the public at large.

Much like appearances of Halloween in the movies, fictional representations of this "spooky" holiday are a relatively new occurrence. According to writer, historian, and Halloween authority Lisa Morton:

...prior to the twentieth century, Halloween made surprisingly few appearances in fiction; the only stories to focus completely on the holiday were usually quaint tales of middle-class parties found in ladies’ magazines, and aimed at Victorian hostesses who were in search of themed parties to fill that gap between Independence Day and Christmas.

In the twentieth century, though, as Halloween celebrations spread throughout America, so did Halloween fiction. Interestingly, stories from the first half of the century still focused on parties; it wasn’t until the close of the 1900s that Halloween fiction became its own cottage industry, with stories now centering on everything from trick or treat to haunted attractions to urban legends to Halloween’s Celtic origins.

As Morton notes, there are several references to Halloween (Samhain in its earliest form) in other literary mediums, primarily poems, ballads, and ancient folklore tales retold and collected by various authors, the first being Robert Burns's 1785 poem "Hallowe'en." Other examples include: "November Eve," which can be found in the collection Ancient Legends, Mystic Charms and Superstitions of Ireland (1887), compiled by Jane Francesca Wilde (Oscar Wilde's mother); "The Young Man In The Fairy Knoll," collected in Superstitions Of The Highlands And Islands Of Scotland (1900) by John Gregorson Campbell; “Cruachan,” which appeared in Cuchulain Of Muirthemne: The Story Of The Men Of The Red Branch Of Ulster (1902) by Lady Gregory; and "The High Deeds of Finn," from The High Deeds Of Finn And Other Bardic Romances Of Ancient Ireland (1910) by T.W. Rolleston. You can read several of these stories for free online in a micro-anthology assembled by none other than Lisa Morton.

The first appearance of Halloween in a work of fiction-proper (i.e., not a folklore retelling) occurred in 1914, with James Joyce's "Clay." Morton calls this tale a "poignant and subtly dreadful story of a lonely, impoverished woman who attends a Halloween party and plays fortune-telling games, with melancholy results." The remaining 1910s and 1920s ostensibly seem void of entries, but there are two notable titles (from equally notable authors) published in the 1930s: "All Souls" (1937) by Edith Wharton, a kind of riff on the haunted house narrative with an undercurrent of commentary on class disparity; and "The Cloak" (1939) from Psycho author Robert Bloch, which features possibly the first mention of Halloween costumes in fiction, and involves a man possessed by his vampire get-up. 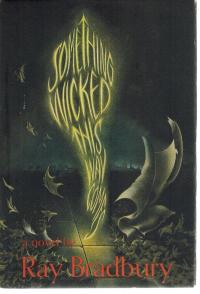 Ray Bradbury enters into the picture here, and he's easily one of the most prolific authors in the realm of All Hallows Eve-related fiction. He published "The October Game" in 1948, which involves the children's game of passing around food and other objects in the dark and pretending they are the body parts of a witch, coupled with a vile "family man" who wants to make his wife suffer. Strangely, this story did not appear in Bradbury's 1955 collection October Country, and while the other tales appearing in this volume don't directly relate to Halloween, their autumnal settings and focus on creeping terror makes the collection worth mentioning here. Similarly, Bradbury's 1962 novel Something Wicked This Way Comes doesn't take place on Halloween specifically, but it is nearly Halloween in Green Town, Illinois, and the macabre narrative deals with two young boys—one born one minute before the 31st, the other one minute after—confronting their darkest fears. The Guardian writer David Barnett notes that the "novel is drenched in darkness, every character a slice of night." In other words, Something Wicked This Way Comes has all the spirit of a Halloween tale without actually taking place on the day itself.

Bradbury did formally return to the spookiest day of the year with The Halloween Tree (1972), a children's novel about eight boys searching through all of time and the history of Halloween to find their friend. Numerous other books aimed at younger readers appeared throughout the 1950s, '60s, and '70s. Highlights include Georgie's Halloween (1958), the third in the "Georgie the Ghost" series, which sees a family's resident haunter following them out to a costume contest, only to back out of entering due to shyness, despite the authenticity of his spooky appearance; perennial Peanuts favorite It’s The Great Pumpkin, Charlie Brown (1967) by Charles M. Schulz, which of course became a beloved television special of the same name; and The House With The Clock In Its Walls (1973) by John Bellairs, recently adapted into a film by Supernatural creator Eric Kripke and directed by Eli Roth. The tradition continued on in the 1990s with famed YA horror writer R.L. Stine's The Haunted Mask (1993), a Goosebumps tale about a drugstore Halloween mask that, like Bloch's vampire costume before it, turns its wearer into an actual monster.

There are several mystery novels centered around Halloween as well, starting with Agatha Christie's Hallowe’en Party (1969), which begins at the titular shindig, where a thirteen year-old girl drowns in an apple-bobbing tub, prompting veteran detective Hercule Poirot to investigate. Susan Wittig Albert dedicated her second China Bayles novel Witches' Bane (1993) to All Hallows Eve, telling the story of a tarot reader who is accused of witchcraft and becomes the prime suspect in a grisly Halloween murder. The twelfth installment of Tony Hillerman's Leaphorn and Chee series, The Fallen Man (1996), involves the investigators looking into a skeleton found on Halloween and a sniper who may be connected to the corpse. Last but not least, Isis Crawford's "Catered" series—which combines murder mysteries with themed recipes—features a Halloween entry, A Catered Halloween (2008). In this novel, a sister catering duo help solve the murder of a loathed socialite, and readers can learn how to make pumpkin bars and Day of the Dead dishes (though this Halloween-adjacent Mexican holiday doesn't play a part in the novel). 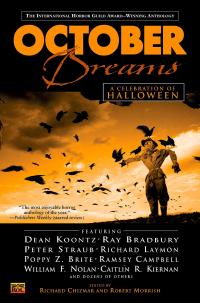 While other genres offer relevant titles—for instance, Nora Roberts's Dance Upon The Air (2001) (Romance) and Roger Zelazny's A Night In The Lonesome October (1993) (Humor and Fantasy)—for the most part, Halloween and horror, fittingly, walk hand in hand, more so than any other fiction category. Strangely, there aren't many novels from the "horror boom" of the 1980s that deal with the holiday, though Richard Laymon's All Hallow's Eve (1985) is a standout. However, in the year 2000, a wealth of Halloween-centric titles began to appear, many of them from some of the biggest names in the genre. The first of particular note is the anthology October Dreams: A Celebration Of Halloween, edited by Cemetery Dance's Richard Chizmar. According to the blurb on Goodreads, the book features "Classic novellas, never-before-published stories, essays on the history, literature, and films of Halloween, and real-life memories of October 31st from today's best practitioners of fear..." These practitioners include the aforementioned Laymon, Dean Koontz, Poppy Z. Brite, Steve Rasnic Tem, Thomas Ligotti, Gary A. Braunbeck, Jack Ketchum (whose story "Gone" went on to win a Bram Stoker Award), Caitlín R. Kiernan, Ramsey Campbell, and Peter Straub, to name just a handful.

Lisa Morton notes that this anthology "paved the way for the Halloween fiction of the 21st century." Indeed, the floodgates seemed fully open, and such festive fiction flooded forth. Peter Straub gave us Pork Pie Hat (2000), and it tells the story of a man interviewing a jazz giant on Halloween night—a musician previously thought to be dead. Other titles worth mentioning here are: The Night Country (2003) by Steward O'Nan, about three teenagers coming back from the dead on Halloween; Dead Beat (2005) by Jim Butcher, the seventh in the author's "Dresden Files" series; Dark Harvest (October 2006) by Norman Partridge, another Stoker Award winner and a slight riff on The Great Pumpkin King, only far more terrifying; Ghost Road Blues (2006) by Jonathan Mayberry, the first in the "Pine Deep" series about a small town with sinister secrets, all of which unearth (quite literally) as Halloween approaches (this title also won the Stoker Award for Best First Novel); Halloweenland (2007) by Al Sarrantonio, the third "Orangefield" novel with clear Bradbury inspirations; Ghost Walk (2008) by Brian Keene, about a haunted attraction designer who gets more than he bargained for (i.e., real evil) with his latest construction; Dead Leaves: 9 Tales Of The Witching Season (2011) by Kealan Patrick Burke, a short story collection with each tale revolving around All Hallows Eve in some capacity; and Haunted Nights (2017) an anthology of all-original stories edited by the one and only Ellen Datlow, featuring entries by the oft-aforementioned Lisa Morton, as well as Seanan McGuire, Kelley Armstrong, Stephen Graham Jones, Kate Jonez, S.P. Miskowski, Brian Evenson, John Langan, and several others.

These titles represent only the tip of the Halloween iceberg. There are so many more literary works out there to discuss, but we just don't have time here. That being said, let us know which short stories and novels, etc. you hold nearest and dearest to your spooky little heart.

LURID: Happy Halloween! Whatever that means...
What Scares You? 30 Terrifying Horror Stories Straight Out Of Your Worst Nightmares