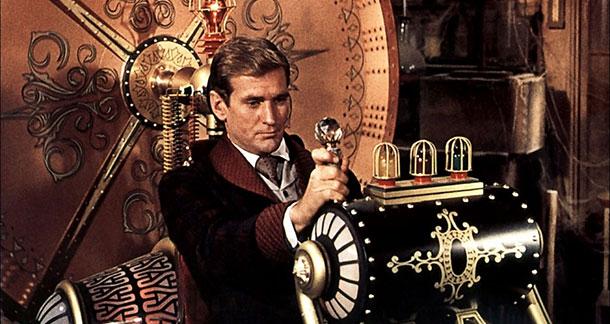 Editor's Note: As far as we know, Cath does not actually possess a time machine, thus her claims cannot be verified.

And what about the books? What sold the most? Which books surprised us? Which flopped? Jump into my time machine and let’s find out.

Thrillers and mysteries took over half the top 20 Amazon slots in 2013, and 2014 saw that trend continue. New releases from James Patterson, Lee Child and born-again crime writer J. K. Rowling have topped the charts. For younger readers, contemporary YA took over from dystopian as publishers jumped from the Hunger Games bandwagon onto the Fault in our Eleanor and Park bandwagon, and stacked the shelves with uplifting tales about cancer, unrequited love and social rejection.

There were also some surprises — sadly, Dan Brown did not confound our expectations by releasing a volume of poetry — but Patterson stuck a toe into Nicolas Sparks territory with his first romance. Rumors that Lee Child is writing erotica remain unconfirmed.

Non-fiction continued to outsell fiction, particularly in historical titles, as Downton fever showed no sign of loosening its grip on the public imagination. Positive thinking became the buzz phrase of the year as pundits waged war against snark in all its forms, and in the celebrity biography stakes, books about Nelson Mandela became must-buys for earnest hipsters everywhere.

The curse of ‘the nexts’

Every year a crop of books hits the shelves billed as ‘the next [insert title of bestseller]’. In 2014, Half Bad replaced The Bone Season as the next Harry Potter, Red Rising got lumbered with the tag line ‘the Hunger Games in space’ and The Night Guest became the next Gone Girl, an entirely natural comparison as Gone Girl is about 20-somethings at war with each other and The Night Guest concerns the relationship between an elderly woman and her care worker.

All these books sold respectably, but none of them went viral in the way their promoters hoped, because selling a book off the back of another book never seems to work, probably because we sense we’re being fobbed off with a pale imitation of the original. After all, if we wanted Harry Potter, that is what we would buy, instead of something we are told is ‘Harry Potter-ish’. We prefer to dig out our own gems, rather than have them handed to us, neatly labeled on a plate.

And in that spirit, all the breakouts were books which if you were asked ‘what’s it like?’ you’d say ‘like nothing I’ve ever read before.’

2014 was the year when interactive books finally hit their stride. Books which contained an element of discovery, of puzzles to be solved, of story which you yourself constructed were the ones we all wanted to possess.

This was also the year when graphic novels went mainstream, covering subjects well outside their usual dystopian/superhero/military territory. Acute observers of the literary scene would have spotted books like Starling and detected the beginning of this trend. Sage Stossel’s graphic novel follows woman-about-town Amy Sturgess – battling domestic crises by day and crime by night.

And in terms of regular print, after decades of languishing in the outlands of cult, science fiction broke out into the big time with a space-epic which went stellar.

The transition between social media and publishing success became even more established this year, following the examples of Allie Brosh’s Reddit comic Hyperbole and a Half, Suri’s Burn Book on Tumblr and Nothing at All on Google + (if you Google that last one, you win my prize for having no sense of humour at all). One side effect of the whole 'blog-to-book as an accepted route into publishing' thing was accelerated growth in the respectability of self-publishing. In 2014 we all stopped arguing over the rival merits of self versus trad publishing, accepting that both had their strengths and weaknesses and that no one model of getting your book to market is ‘better’ than any other.

The success of interactive books did not halt the slide in popularity of eBooks overall. The market for electronic reading material topped out in 2013 and just barely held steady in the twelve months which followed. Avid readers stuck with eBooks, but the casual reader preferred print, still picking their holiday reading at the airport departure gate and choosing real books over files when giving gifts at Christmas. This meant that independent bookshops continued their renaissance, filling the gaps left by Amazon. Sadly, that gap was not big enough for the remaining bookshop chains. Barnes and Noble closed its doors to trading in 2014 and Waterstones, the last UK book retailer, looks likely to follow suit in 2015.

2014 was a good year for books. Yes, overall sales continued to shrink, but by the end of the year it was clear that this decline was flattening out, probably as eBook piracy found a level and stayed there. Despite the worst predictions of doomsayers about the effect of Twitter on our brains, we’re still buying and reading books. Our choices about how we read have broadened, our choices about what we read still shift, year on year. But we still read. And we probably always will.

Cath does have a time machine. She invents it in thirty years and takes it back, which is basically the same thing as having one now.

Ray Richards from Michigan and Iowa is reading The Great Shark Hunt by Hunter S. Thompson December 25, 2013 - 10:45am

For a few of those statements, I forgot what year it is.

I love your version of the future, Cath. Love.

@Nathan - that was supposed to be a SECRET.

Dwayne from Cincinnati, Ohio (suburbs) is reading books that rotate to often to keep this updated October 25, 2014 - 11:37pm