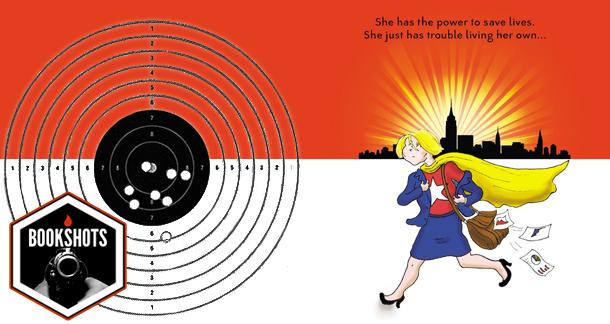 Sage Stossel, a cartoonist and contributing editor with The Atlantic

While it could easily get lost in the shuffle of the myriad graphic novels on the shelves of most bookstores, Starling definitely deserves a second (and third and fourth and fifth) look.

When her brother gets mixed up in a drug ring and the kingpin wants him dead, Amy Sturgess turns to her burnt-out superhero alter-ego Starling to save the day...and if she finds herself a boyfriend as she goes...well...no one ever said she couldn't have a little fun, too.

Classic superhero comics with a twist, like The Incredibles. And if you like the idea of Wonderwoman, but without all the tits and ass, this book is for you.

Amy Sturgess is a lonely twenty-something marketing exec with a secret double-life: she's also a superhero called Starling, working as a vigilante on a volunteer basis. When the two lives don't exactly mix (in order to explain her many, sudden disappearances, she tells her coworkers she suffers frequent bouts of explosive diarrhea, and if that's not enough, one of her coworkers is out to steal her job), she turns to Xanax and therapy just to be able to sleep at night. Which would work...if only her superhero pager would stop going off all the time.

I think Jennifer Lawrence has the perfect mix of awkward fumbling and beautiful confidence to pull off Amy Sturgess.

A nondescript "big city" with a penchant for bank heists and art museum drama? Sure. Count me in.

It's hard to find a favorite sentence in a graphic novel. It's not exactly written in a way that flows and lends itself to amazing sentences. But my favorite scene involved a wedding, Starling in a bridesmaid gown and hat (oh, the hat!!), and a wedding cake that's about to go DOWN.

Sage Stossel is an acclaimed artist, illustrator, and writer, and Starling is proof she deserves the praise. A quick read (it took me less than a day to fly through this book), it was utterly engaging and entertaining.

As a heroine, Amy Sturgess is a classic superhero archetype (burnt out, exhausted, unappreciated, but unable to stop saving the world) turned slightly on her head. Think Wonderwoman, without the golden lasso and the revealing costume. In fact, in a particularly brilliant scene, Amy works with a team to choose her superhero costume, and after vetoing a few low-cut, high-legged options, she asks, "Who's designing these? A thirteen year old boy?" Sure enough...it is.

Amy is lonely and sad and boyfriendless, and her job is on the line since she often disappears mid-day to go save the world. Too bad no one at work knows that's what she's doing. They just think she has Irritable Bowel Syndrome, and it doesn't get much more embarrassing than that, does it? She's a great foil to the typical superhero, and somehow the fact that she has a bit of a Xanax addiction only makes her more endearing.

The writing is tight and the art is simple but enjoyable. The action is swift and, often, very funny. And as Amy works to save her brother from an evil drug kingpin, falling in love with a retired UFC fighter in the process, the chain-reaction is nerve-wracking and hilarious.

Overall, this is an entertaining book, and I enjoyed it tremendously. While it could easily get lost in the shuffle of the myriad graphic novels on the shelves of most bookstores, Starling definitely deserves a second (and third and fourth and fifth) look. Kudos to Sage Stossel for a fantastic book.