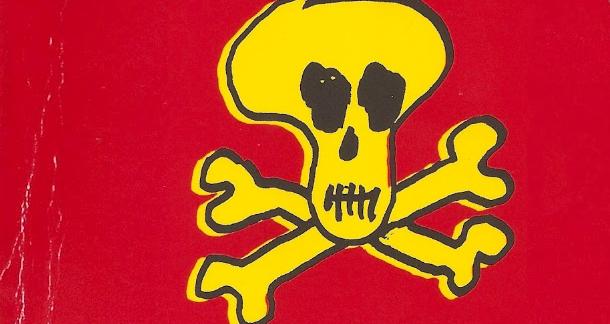 There are politically or sociologically-charged novels that come right out and say what they mean, with varying degrees of heavy-handedness. And then there are novels that make sweeping critiques of government and society through gross (in both senses of the word) surrealism and absurdity, often doing so via subversive means.

These ten novels fall into that later category. They either provide readers with grotesque settings and situations, or they occupy a place in the recognizable world, and approach serious matters with improbable reactions from their characters. Hilarity ensues in either case. 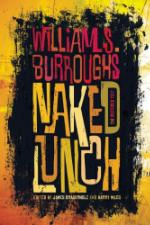 Burroughs's most famous work disorients and even disgusts the reader through increasingly disparate scenes of psycho-sexuality and drug use. Some argue the novel is nothing more than the literary experiment of a junky, a mess of Herculean proportions, but there is more to Naked Lunch than meets the eye. As Mary McCarthy notes in her 1963 review of the novel (published in The New York Review of Books, an excerpt of which appears here), Burroughs uses Vaudevillian techniques to examine totalitarianism and depravity as byproducts of "the human virus," for which ultimately there is no cure—so what at first appears to be life through the lens of a heroin-addled mind becomes instead the disjointed rigmarole of existence, regardless of one's vices. 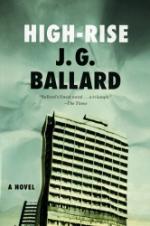 To say the events that unfold in Ballard's 1975 novel are improbable is a bit of an understatement. In case you haven't read the book (or watched the mostly faithful film adaptation, which you can read all about here), the plot involves the residents of a luxury condominium building on the outskirts of London quickly devolving into violence and primitive behavior following the titular high-rise's technical collapse. Experiencing this narrative, one wonders why not a single character ever considers leaving the building and seeking help from the outside world. The answer is twofold, but also quite simple: one, Ballard's tale is an allegory on the order of Orwell's Animal Farm, in which our larger society endures scrutiny via a microcosm (the residents of the high-rise); and two, a significant portion of this microcosm involves examining the territorial inclinations of human beings, both in terms of "civilized" and "primitive" society, the differences of which are, in the end, scant at best. After all, the high-risers chose isolation at the onset of the narrative, preferring to live in a self-contained environment away from the rest of civilization. In this way, the overarching plot doesn't seem so improbable after all. 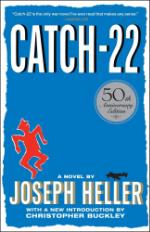 Perhaps the funniest war novel ever written, Heller is not only responsible for coining a phrase now so ingrained in our language, but also providing an early critique of military absurdism. It is too glib to say the novel points out the insanity of war. Rather, by invoking the titular "double bind"—that airmen who were insane were excused from flying missions, but that anyone applying for said exemption for reasons of insanity displayed "a rational concern for his safety" and were, therefore, mentally fit to fly—Heller shows us that through legal web-weaving, the military traps people for life—i.e., once a soldier, always a soldier, even after the frighteningly unlikely scenario a soldier finally gets out. Insanity, in this way—and through the honoring of brave American stoicism over intelligence—rules the day. 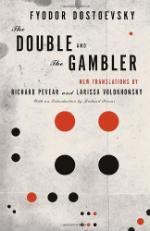 4. 'The Double' by Fyodor Dostoyevsky

In his essay "The Young Dostoevsky: An Assessment in the Light of Recent Scholarship" (printed in New Essays on Dostoevsky and cited on Wikipedia), literary critic Victor Terras theorizes "that The Double's main idea is that 'the human will in its search for total freedom of expression becomes a self-destructive impulse.'" Moreover, "This individualistic focus is often contextualized by scholars, such as Joseph Frank, who emphasize that Golyadkin's (the novel's protagonist) identity is crushed by the bureaucracy and stifling society he lives in." Interwoven among the dichotomy of individualism and conformity is madness, and Golyadkin's insanity stems from his conflicting desires to both fit in and yet also stand apart from the herd. Dostoyevsky ultimately posits that Golyadkin's desires are futile, and since he represents a kind of Everyman within society, all of humanity must decide between external acceptability or internal madness—and that, moreover, given that fitting in involves embracing the absurd etiquette of so-called civilized society, one must ultimately choose between two sides of the same insane coin. 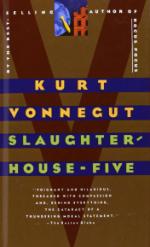 Vonnegut is a master of straddling the line between hilarious absurdism and pitch black social commentary, a technique he employs to its fullest effect in this novel. Alongside protagonist Billy Pilgrim, we become "unstuck in time" and bounce around timelines with the ease of children playing hopscotch. We also travel to far off planets with the Tralfamadorians, who see time in all four dimensions simultaneously, and who express their worldview with three simple words: "So it goes." This phrase applies to both the banalities of Pilgrim's existence after World War II, as well as the horrors of the Dresden bombing during the war. In this way, the existence of fantastic alien life and civilian atrocity during wartime co-exist on the same plane, one neither lesser nor greater than the other. Within the human tragicomedy, brightness and bleakness are one and the same. 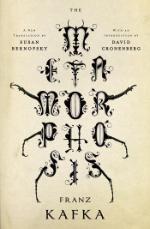 6. 'The Metamorphosis' by Franz Kafka

Kafka's insights here are fairly simple: one may survive and even find comfort in their bizarre skins, but being different is ultimately too much of a burden on those around you, and they are happier when you are gone. Like The Double before it, The Metamorphosis explores the toll individualism takes on the individual, but it also shows us the consequences of nonconformity on those around us, even when said nonconformity is not willingly adopted. Gregor Samsa's transformation into a giant insect happens overnight and at random, without the protagonist's consent. He has not chosen to appear monstrous, and yet his monstrousness negatively affects his acceptability no differently than if he had actively adopted his new persona. No matter the circumstance, Kafka asserts, individualism of any sort must not be encouraged or embraced. 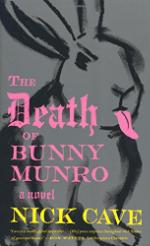 7. 'The Death of Bunny Munro' by Nick Cave

Sean O'Hagan of The Guardian notes that one of the main influences behind Cave's second novel is the "Scum Manifesto" by Valerie Solanas, a militaristic feminist made infamous by shooting Andy Warhol. In particular, Cave crafted a protagonist that echoes Solanas's view of the typical male, which "is completely egocentric, trapped inside himself, incapable of empathising or identifying with others, or love, friendship, affection of tenderness," and so on, ultimately assessing him as "a half-dead, unresponsive lump, incapable of receiving pleasure or happiness." As O'Hagan notes, "Cave's fictional antihero, Bunny Munro, is Solanas's misogynistic Everyman made frighteningly, absurdly, hilariously real." Knowing his time on earth will soon come to an end, Bunny becomes "a booze-addled, nicotine-stained, cocaine-fueled monster constantly in search of priapic adventure." Cave effectively employs the extreme to underline the sex-obsessed and ultimately woman-hating "dude bro" or "frat boy" culture dominant the world-round, focusing a microscope on the line over which any one of us could step should we receive some form of perceived permission to do so. 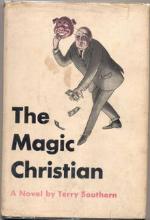 8. 'The Magic Christian' by Terry Southern

More largely known for his collaboration with Stanley Kubrick on Dr. Strangelove, Southern's darkly comic novel bites with the same satirical ferocity as that more famous antiwar film. The nearly plotless book follows the adventures of an eccentric billionaire, Guy Grand, whose closest literary equivalent is The Joker. He believes that everyone has a price, and tests this theory to utterly absurd limits, playing elaborate practical jokes that expose the basest and simplest of greeds. Southern essentially states that greed worms its way into all facets of human existence—and yet, it is clear that without capitalist societies, the kind of monetary greed Grand loves to exploit would simply not exist. His protagonist, in this way, becomes a symbol of any high-ranking official in possession of significant wealth, a moralizer who is not exempt from the problem of greed, but rather the progenitor of it, willing to spread the wealth only for his own personal gain. 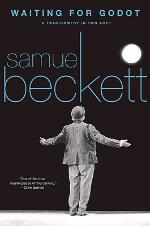 9. 'Waiting for Godot' by Samuel Beckett

An expected title on a list of absurdist pieces, but for good reason. Its message may be simple, but the journey getting there generates exquisitely uncomfortable laughter through baffling scenarios and interactions. Many scholars believe the titular Godot is a substitute for God or religion, with the joint protagonists Vladimir and Estragon futilely waiting for someone or something that will never appear, their lives becoming an infinite loop of redundancy and loss of identity along the way. But Beckett's skewers range much farther than mere religious scrutiny, as Godot represents systems of authority both large and small, external and internal. The clowns must wait, and they obey, no matter that they have no idea why the must wait, who ordered them to wait, and even where they must wait. All of life, it seems, exists on a need-to-know basis, and we need little-to-no information to soldier on, complacent and willing. 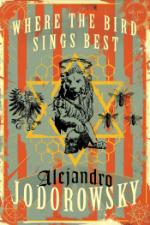 10. 'Where the Bird Sings Best' by Alejandro Jodorowsky

Combining "re-imagined" personal experiences alongside family stories and world history, Jodorowsky's novel weaves between magical and gritty realism, much like Vonnegut's aforementioned Slaughterhouse-Five. The fantastic and horrific go hand-in-hand here, but the breadth of horror's burden is open to interpretation. He writes, "In memory, everything can become miraculous. All you have to do is wish it, and freezing winter turns into spring, miserable rooms fill up with golden tapestries, murderers turn good, and children who cry out of loneliness receive caring teachers...the past is not fixed and unalterable. With faith and will we can change it, not erasing its darkness but adding lights to it to make it more and more beautiful." In short, one cannot (and should not) totally escape past horrors, but rather embrace and embellish them to one's own liking. In this way, horror remains an inevitable aspect of existence, but it is only as powerful as one allows it to be. Whether or not this is a naive delusion, Jodorowsky does not say, but when grappling with terror and suffering, perhaps there is little else we can do to combat total collapse.

Any books you'd add to this list? Any that you'd remove? Let us know your thoughts in the comments section below.