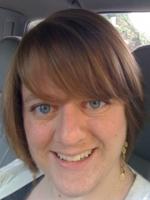 Taylor Houston is a genuine Word Nerd living in Portland, OR where she works as a technical writer for an engineering firm and volunteers on the planning committee for Wordstock, a local organization dedicated to writing education.

She holds a degree in Creative Writing and Spanish from Hamilton College in Clinton, NY. In the English graduate program at Penn State, she taught college composition courses and hosted a poetry club for a group of high school writers.

While living in Seattle, Taylor started and taught a free writing class called Writer’s Cramp (see the website). She has also taught middle school Language Arts & Spanish, tutored college students, and mentored at several Seattle writing establishments such as Richard Hugo House. She’s presented on panels at Associated Writing Programs Conference and the Pennsylvania College English Conference and led writing groups in New York, Pennsylvania, and Colorado for writers of all ages & abilities. She loves to read, write, teach & debate the Oxford Comma with anyone who will stand still long enough.