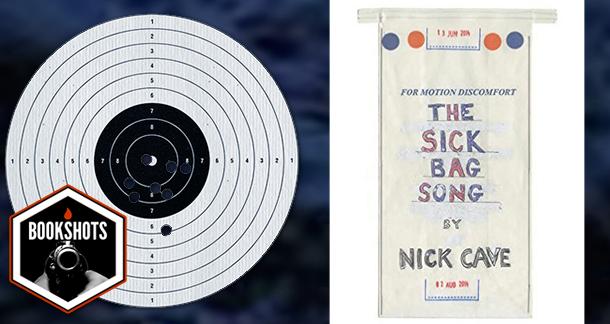 While the stray ideas and pieces of prose are as intriguing on their own as his music, it's best experienced alongside Cave's other work

The Sick Bag Song was written on airline sick bags during Cave's 2014 Push the Sky Away album tour through North America. It evolved into a full volume over the course of his travels.

It seems silly to alter the title of a book that has such a specific meaning.

Hunter S. Thompson and 20,000 Days On Earth, the documentary that Cave produced to accompany his latest album, Skeleton Tree.

A scattered retelling of his tour and pieces of his life, The Sick Bag Song is an intimate investigation into various highlights in Cave's career as an artist.

Cave himself would probably play a form of exaggerated version of himself. The movie would be directed by John Hillcoat (The Road, Lawless) since Cave has done the score for all of his movies.

Despite the changing outward setting, the book is truly set in the musician's mind as he continues his tour. Would I want to live in Nick Cave's mind? Probably not, but I don't really think he does either.

The boy does not realise that he is not a boy at all, but rather the memory of a boy.

The Sick Bag Song, as the names teases, is a book of poetry that includes dozens of full-color images of barf bags collected throughout the author's travels. Like the recently produced documentary, 20,000 Days On Earth, the poetic scribbles are an intimate behind-the-scenes view of Cave's life, including larger themes as well as smaller events encountered during his life on the road.

Whether or not The Sick Bag Song is a book that you should buy really boils down to a single question: Do you enjoy the music of Nick Cave? Because the fact that these thoughts are written out on airline bags doesn't change the fact that they are irrefutably Cave's thoughts.

While the stray ideas and pieces of prose are as intriguing on their own as his music, it's best experienced alongside Cave's other work, particularly the film, which details Cave's creative process as well as how it intertwines with grief for his son, Arthur, who died after falling off a cliff in 2015. Like much of Cave's works, the poems are elusive; a darting glimpse into the complex universe that is the mind of Nick Cave.

Interesting Review! I appreciate it. I don't know the music of Nick Cave, and I thought I knew his stand-up comedy, but I am likely wrong on that count. Anyway, this is nice. I can relate to poetry on a barf bag. Thanks. gsr

Nice one. I have read some part of this from one of the best torrent sites There are some good torrent sites for ebooks to read before you buy it. I am really looking forward to read this. Thank you so much.