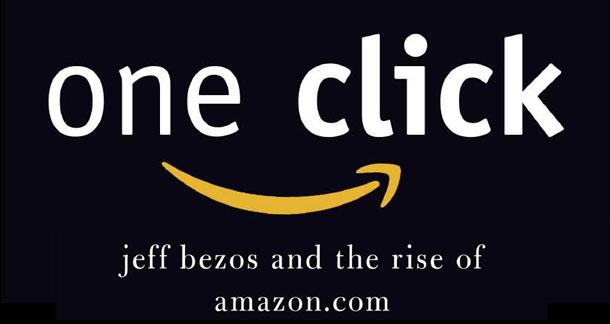 Richard L Brandt’s biography of Amazon.com and its founder, Jeff Bezos, will not win any prizes for literary excellence. One Click is a third-person biography that veers between failed but earnest attempts at rhetorical distance and gushing Toastmaster-esque entrepreneurial fanwank; it’s a “clip-job”, collated and collaged from journalistic coverage of the subject and other extant sources. (Clip-jobs are very common on the music biography shelves, and often consist of a journalist recycling part of their own body of previous work for the purpose, though I don’t know if that pertains here.)

That’s not to diss Brandt, who no doubt knows this is what the target market for biographies of bigshot dot-com CEOs (think “people who read Clay Shirky but don’t grok his subtext”) wants to read, and has made a commendable job of polishing away most of the welds and seams. But if you were hoping for insight into Bezos the man, the father, the husband, the boss, or the would-be colonizer of outer space, well, you might as well write it yourself. The Bezos quotes here are predominantly from tech-biz interviews and press releases, and as such you’re seeing the Bezos that Bezos (and, his introductory digression into the history of the controversial One-Click patent notwithstanding, Brandt) wants us to see.

That said, there’s a utility to One Click and other books like it, in that “Great Man” business hagiographies offer a novelistic route for the reader into what would otherwise be a dry sequence of patent filings, profit reports, and corporate takeover bids. By preassuming a biography contains the same sort of narrative bias you would expect to find in both the viewpoint character and authorial voice of a novel (I know, I’m so po-mo it hurts), you can get a feel for the flow of events without necessarily buying into any one interpretation of them. This is not to claim that “the story of Jeff Bezos is the story of eCommerce!”, but it is a story of eCommerce, and as such, I’d argue, worth reading.

The story of Bezos -- which, as presented here, is largely unremarkable for a successful dot-com entrepreneur in anything other than the scale and (apparent) ease of his success -- offers new routes through a previously unmapped country, which gets me in the mood for exploring further. I learned a lot of things about the economic history of the last two decades from reading One Click; things which, presented in their usual business-news format, are either impenetrable or unexciting (or both). There’s no escaping Amazon’s 5,000 lb. gorilla status in the eCommerce game, and as such -- while I don’t believe the situation is anywhere near as gloomy as the PR departments of the publishing industry would like us to think -- whether we’re readers or writers (or both), the onus is on us to understand the politics of the marketplace and vote with our work as well as our wallets. Caveat emptor et vendor, right?

Sure, Amazon has behaved like the business equivalent of a charming and acquisitive psychopath, but that’s just what big successful companies do.

Right. So you’ll already have seen a few publishing houses shaking their heads as they padlock the doors one last time, lamenting how Amazon is holding them to ransom via ludicrous discount rates on dead-tree editions, or threatening not to carry an imprint’s eBooks in the Kindle store if it doesn’t get the deal it wants. Largely missing from such laments is an admission that this impasse has been reached thanks to the keenness of the big publishers to throw discounts Amazon’s way, back when the economic bubbles still glistened with promise. Likewise, the withering big-box retailers are reticent on how much of the blame is owed to their own business models and strategies rather than Amazon’s. This is disingenuous, especially as -- if you look beyond the op-ed pieces and handwringing obituaries for Book Publishing And Culture As We Know It -- rumours of publishing’s demise appear to be somewhat overstated. Sure, things ain’t like they used to be, but that’s hardly unique to the world of books. The publishers are down, but they’re far from out... and it’s not in the nature of monopolies to last, especially on the intertubes.

The point here being that Amazon, like Bezos, is unremarkable in almost every way except the scale of its success. Sure, Amazon has behaved like the business equivalent of a charming and acquisitive psychopath, but -- as Joel Bakan pointed out in his book The Corporation -- that’s just what big successful companies do. It’s the evolutionary advantage that enables them to become apex predators in a global financial ecosystem, and complaining when they do it well is like getting angry at lions for eating gazelles. Bezos succeeds precisely because he doesn’t ask questions that are irrelevant to his goals -- questions like “will this move kill off independent book retailers?”, which just don’t matter to the bottom line of the balance sheet. I’m pretty sure that great chess players are great precisely because they don’t sit there pondering the inner lives of their playing pieces. (That is more the province of writers, I guess.)

As One Click makes clear, Amazon became the elephant in everyone’s room by giving us what we wanted in the ways we wanted it; as such, we too are complicit in the destabilisation of the book-selling and publishing marketplace. It’s very fashionable right now to hate on billionaire capitalists in general, and hating on Amazon is even more popular among mid-list authors fearful for the future of their careers (with, to be fair, some degree of justification). But we’d all do well to remember that the misdeeds of multinational corporations are enabled by our own greed for getting more stuff for less money. The most important message One Click has for us about Amazon’s current position at the top of the dogpile is that it’s our patronage which put it there, and until we (and the publishing houses) face up to that inconvenient truth, nothing is going to change.

Paul Graham Raven writes fiction and non-fiction, and leaves it to his editors to decide which is which; he'll be studying for a Master's in Creative Writing at Middlesex University from the autumn of 2011. He's also editor in chief of the SF/futurist webzine Futurismic, a reviewer of books and music, a cack-handed post-rock guitarist, and in need of a proper haircut."