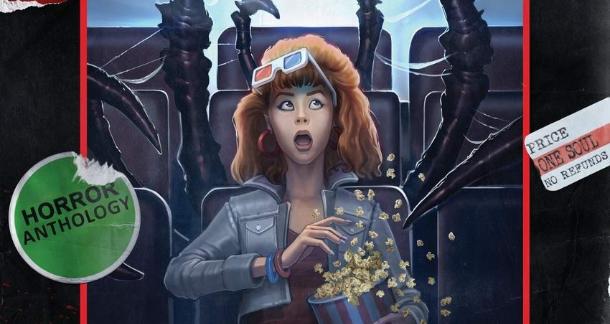 It’s almost Halloween, and that means it’s time to glut yourself on as many horror narratives as you can get your hands on. Anthologies are, of course, a great way to stuff one’s gullet, since they provide a cornucopia of horror. If you’re looking for something schlocky and escapist, It Came from the Multiplex: 80s Midnight Chillers is the perfect serving of candy, soda, and popcorn.

Edited by Joshua Viola, the collection’s official blurb perfectly sums up what the book has to offer:

Welcome to tonight's feature presentation, brought to you by an unholy alliance of our spellcasters at Hex Publishers and movie-mages at the Colorado Festival of Horror. Please be advised that all emergency exits have been locked for this special nostalgia-curdled premiere of death. From crinkling celluloid to ferocious flesh—from the silver screen to your hammering heart—behold as a swarm of werewolves, serial killers, Satanists, Elder Gods, aliens, ghosts, and unclassifiable monsters are loosed upon your auditorium. Relax, and allow our ushers to help with your buckets of popcorn—and blood; your ticket stubs—and severed limbs; your comfort candy—and body bags. Kick back and scream as you settle into a fate worse than Hell. Tonight's director's cut is guaranteed to slash you apart.

Reading Multiplex is a bit like watching Creepshow, Stephen King and George Romero’s ‘80s cinematic tribute to EC comics. For the most part, it’s gory, goofy, and painted in the broadest strokes imaginable. There are a few exceptions to this rule, most notably Stephen Graham Jones’s “Coming Attractions,” about a group of youngsters who sneak into a movie theater overnight and find the real-life scares they were looking for (and then-some), Orrin Grey’s “Screen Haunt,” which involves a young filmmaker who makes a horror film in honor of her vanished sister (opening a terrifying door in the process), and Steve Rasnic Tem’s “Late Sleepers,” about a hallucinatory trip to a dilapidated “dream palace” on its last night of operation. These stories are, in the words of King, “innies,” in that they are focused more on psychological responses to terror, rather than the terrors themselves, per se.

Multiplex is an overall fun read, and there are plenty of original works... that are worth the price of admission.

Most of the stories are “outies,” however. They’re concerned more with action, creepy set pieces, and “special effects” (creature descriptions and scenes of violence). The standouts in this latter category are: “Rise, Ye Vermin!” by Betty Rocksteady, about a woman and her girlfriend held captive by a sadistic (and supernatural) theater manager; “Helluloid,” by Dayton Ward and Kevin Dilmore, about a group of teenagers who conduct an occult ritual in their local movie theater’s basement, and unleash a malevolent entity in the process; and “Creature Feature” by Gary Jonas, about a shuttered theater clandestinely playing violent movies 24/7 to a mysterious audience. This latter piece suffers from a too-abrupt ending, however, and this is a weirdly concurrent problem throughout Multiplex. One wonders if ambiguous conclusions were the goal (both Stephen Graham Jones and Orrin Grey’s stories end in haunting ambiguity), but more often than not, the various entries end up feeling unfinished rather than enigmatic.

Still, this isn’t as big a problem as the shortage of women in this collection—of the fourteen writers published, only three are women. This lack of representation was, as Kirkus Reviews points out, a problem back in the ‘80s horror movie scene, and is only slightly better today. It’s also a persistent issue in the world of horror fiction too, even though tons of women are killing it with their work, and sadly, Multiplex is yet another example of an anthology that isn’t as diverse as it could be. Adding insult to injury here is the penultimate story in the collection, “Special Makeup” by Kevin J. Anderson, which features a near-gratuitous use of a certain “G” word now widely recognized as a dangerous slur against the Romani people. Anderson’s story was first published in 1991, back when criticisms of the term weren't as socially prevalent, and the tale plays with stock characters from the typical werewolf narrative, so the appearance of the “G” word here is an uncomfortable oversight on the part of the author. And while, admittedly, the offensiveness of the term isn’t as well-known as it should be, it's still offensive and definitely shouldn't be appearing in a 2020 anthology. (Read more about the history of the word and its ties to slavery and genocide here).

These issues aside, Multiplex is an overall fun read, and there are plenty of original works, especially those mentioned above, that are worth the price of admission.

Buy It Came From the Multiplex at Bookshop or Amazon

Contact Dr Ozigidon if you have been trying to conceive, I never thought I'd be writing this message but after 5 years of infertility and nearly lost my marriage due to not being able to have a child after suffering from PCOS and my TUBES ARE TIED, and severe endometriosis and scanning, I was told that IVF was the only option. This was something we could not afford and had almost given up hope of becoming a parent. A friend of mine recommended Dr Ozigidon to me and persuaded me to contact him, I finally contacted him and he made a spiritual breakthrough to get me pregnant with his powerful spell, within 2 weeks I was pregnant (naturally!!!) and my tube was untied as instructed by this powerful sorcerer. Now! I gave birth to healthy twins in February. I am writing this testimony for those women who are facing the same challenges or even more, depressed with no light at the end of the tunnel. Give Dr Ozigidon a try to help you solve your problem, and hopefully you'll have the same success that I have had. His email address (drozigidonhnez.spell.net@gmail.com) . Call or Whats-App him +2349054750112. I wish you all happiness in your marriages.