Bookshots: 'The Blade This Time' by Jon Bassoff 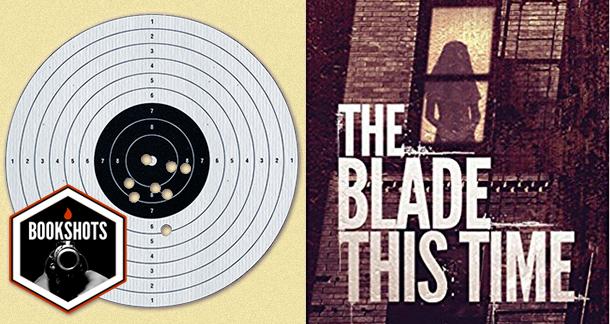 The Blade This Time

Every page drips with dread, and every sentence feels smeared in grime...It keeps you on your toes and guessing until the very end.

Born in New York City, Jon Bassoff is a self-described gothic-noir writer living with his family in Colorado where he also teaches high school English. His previous novels include Corrosion, The Incurables, Factory Town and The Disassembled Man, three of which have been made into movies.

Told from first-person perspective, a man wakes up in the labyrinthine subways of New York City. He has amnesia, a wad of cash and a deck of cards missing the Queen of Hearts. After a violent encounter with the homeless population, the leader of which says the man looks like “Charles Piece,” he stumbles onto the dank streets and finds an apartment for rent. Previously owned by Max Leider, who left everything behind, “Charles” adopts Max’s identity. This includes his clothes, his paintings and eventually his life. But he doesn’t know what dark path this will take him down...

Charles Pierce — an amnesiac man who takes on the identity of Max Leider, an enigmatic artist. He adopts everything about Leider, and when looking in the mirror even believes himself to look like the missing artist.

Suzanne Flowers — Described as looking “bloated, her eyes like tiny black marbles pressed into her misshapen glob of a face.” She’s the mother of Anthony Flowers, who may or may not have been murdered by Leider. She comes looking for her son but finds Charles instead, and immediately recognizes him as Leider, although he claims to not be.

Claire Browning — an agoraphobic woman that lives across the street from first Leider and later Pierce, her association with Anthony Flowers gets him into trouble. Leider was obsessed with her and would often depict her in his art. Pierce manages to track her down after Anthony is murdered.

Charles Pierce — Confused, reclusive but intelligent and driven, Oscar Isaac would be perfect for the role. His portrayal of Poe Dameron in The Force Awakens showed off his natural charm, something that would come in handy in making Pierce likable despite his possible insidiousness. His role as Nathan in Ex Machina, however, shows an ability to portray egotism and sadism in an expertly credible way.

Suzanne Flowers — Introduced as nearly delirious, as Anthony’s mother she has to be deeply wounded but strangely caring. Someone like Meryl Streep could certainly pull off the intense worry and fractured soul.

Claire Browning — Intensely vulnerable but an overachiever, having been a valedictorian that came to New York for Broadway, Rosario Dawson could certainly be an inspired choice. She’s beautiful but has world-weary eyes. There’s warmth there, but also a hesitance to trust.

New York City, the present day. But the kind of New York City that I used to envision from the way movies portrayed it in the ‘80s. Gritty, grimy, rats everywhere, leprous, subway-dwelling homeless people. Raw sewage just sitting in drums in dark alleys. Seems legit! But I wouldn’t want to visit much less try to afford an apartment there.

As the sky began to darken, I found a park bench to lay my weary bones, but the devil/god wouldn’t let me rest; he had it in for me.

I’ve said this before, but I’m about done with the first-person perspective. It usually feels like a bit of a cheat, and not all writers know how to utilize the limitations of first-person POV to their advantage. For example, it’s hard to portray the passing of time, and it’s certainly hard to convey information about the world that the narrator can’t know.

But Bassoff is a skilled writer and excels with his “Charles Pierce” being an unreliable narrator. In the classic creepy mystery vein, along the lines of Edgar Allan Poe, Bassoff presents a character that is highly delusional but firmly in denial. Or is he? It’s clear from the beginning that Pierce is Leider, but the book plays within the structure of established amnesia and split personality tropes so well that the reader is led down a merry chase.

There are some sections that go on a little long, including an interminable phone conversation with Leider, but where this book triumphs is in atmosphere. Every page drips with dread, and every sentence feels smeared in grime. There’s a palpable sense of desolation, as well, as the solipsistic view of Pierce leads to the reader questioning everything that happens.

It keeps you on your toes and guessing until the very end.